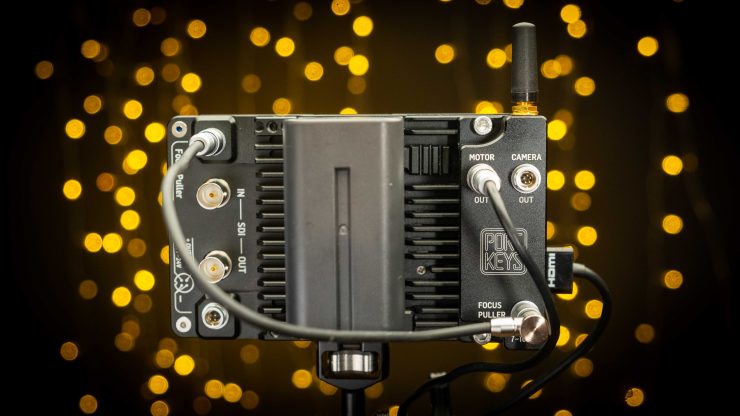 The Portkeys 5.2″ BM5 2000nit SDI/HDMI touchscreen monitor is an excellent performer at a competitive price of $500. Check out my hands-on review for the full details. The monitor is capable of camera control with a select number of cameras. The BM5 has a port on the bottom that interfaces with a cable to the camera. The camera control feature works extremely well with the Z Cam E2.

Now Portkeys have a BT1 Bluetooth add-on module to further camera control wirelessly. By adding Bluetooth camera control, you eliminate the cable making a little less clutter around the camera. Less cabling is always welcome. The module is only for making setting changes on the camera, not for live camera monitoring. You still need to plug the camera into the Portkeys BM5 to see an image and access the Bluetooth Module.

The BM5 supports several cameras when using the correct cable; however, the BMD Pocket 4K/6K camera is the only one for now that connects wirelessly with the BT1 Bluetooth Module for control. You need to be on the latest 6.6 Pocket Cinema Camera firmware and the most current V1.05.15 firmware on the BM5 monitor.

The amount of settings available via the BT1 Module is extensive. To turn the feature on, you first have to pair the Pocket Cinema Camera with the BT1. The F1 preset on the BM5 is pre-programmed to activate the Camera Control option. Long pressing on F1 gives the option to select a camera. Scroll through and choose BMDPCC4K(BLT).

In the Pocket Cinema Camera menu, navigate to Setup and turn on Bluetooth. Now pair the Pocket to the BT1 with the camera supplied six-digit code.

It was straightforward to do and worked the first time I did it. Refreshing. From here, you swipe left and right on the screen to access the menu options.

Changing settings is easy. It’s all touchscreen-based and simple to navigate. If you don’t want to see the menu a simple tap of the F1 shortcut brings you back to full image display.

Portkeys also added Tilta NANO and Nucleus-M motor control with the BT1 Bluetooth Module. A Portkeys cable goes from the BT1 to the NANO motor. This cable has a mini USB connector and a 5-pin connector that plugs into the BT1.

Since I have the cable and the Tilta NANO, I tried it out, and for now, it’s a little rough. Portkeys stated that the function is still being worked on, and an update coming on release will make the function much more usable. To be fair, Portkeys did let me know that it wasn’t ready yet, and they do have a good track record of improving performance. With the Z Cam E2 Portkeys did make big improvements.

While the feature isn’t ready yet, I would imagine using a touch screen for live-action, and quick critical focus is probably not easy, let alone possible. Still, the ability to control the motor is very impressive for a $500 monitor and a $99 Bluetooth Module. Don’t expect the same performance you get from a dampened focus wheel.

Pulling focus by setting an A/B point would definitely come in handy for repeatable focus pulls with manual focus lenses. Focus by wire lenses generally doesn’t have repeatable focus points hence why I hate them. 😀

With the BM5 getting input power from the NP slot. The motor out on Bluetooth Module also powers the Tilta Nucleus Follow Focus motor. The camera out can power the camera by the external dummy battery. While this is convenient, it is also a lot of devices from a single NP style battery. The NP-F battery should be a larger capacity version, like the NP-F950 series. That’s a lot of devices off of one battery.

The BT1 integrates in a way that is simple and doesn’t require yet another device other than attaching the module to the monitor. Other options like the iPhone app-based Blackmagic Camera Control and the Bluetooth+ app both work well but you have to use an iPod, iPhone or Android device and that isn’t always convenient or fast.

The amount of control is pretty good, but you have to ask yourself if this is really necessary since you can easily make these settings changes from the camera. If you are using the BM5 as the primary interface and monitoring, then having all this type of functionality feels like an OEM option. That is impressive for a third party product. I’m assuming in the future the BT1 will be built into future Portkeys monitors similar to the camera control option that was offered as an external option.

I wanted to test the Tilta NANO and Nucleus-M control features, but this will have to wait for the updated firmware that should be released very soon. If this feature is the most important to you, then waiting for the update is a good idea.

The Portkeys BM5 is one of my favorite monitors in this price range. 2000nits is very usable outside. In bright conditions, it’s usable; however, I think 2000nits is where daylight viewability starts. For $99, I think the Bluetooth Module is a good paid add-on for the Portkeys BM5.