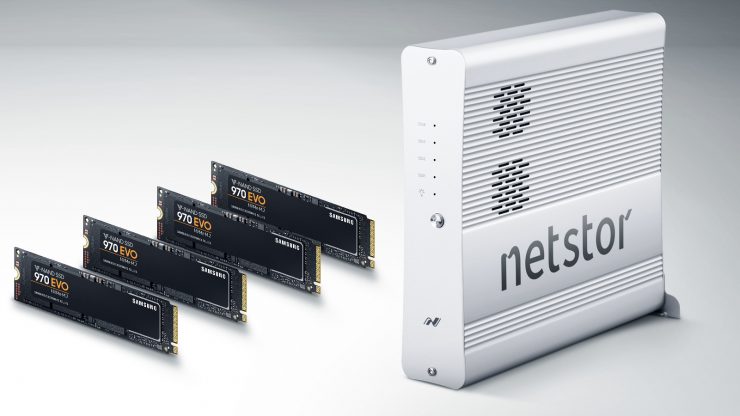 If you need extremely fast read and write speeds while on the go than the new Netstor NA622TB3 enclosure may be what you need.

The NA622TB3 is the World’s first Thunderbolt 3 external enclosure that lets you use M.2 SSD drives rather than spinning disks or SATA SSD drives. Using NVME SSD drives, which currently come in a maximum capacity of 2TB, you can add up to 8TB of blazing-fast storage with data rates up to 2750 MB/s in RAID 0 or RAID 1.

Since it uses Thunderbolt 3, it has more than enough throughput at 40 Gbps, approximately 2.8GB/s.

If you have a few Thunderbolt 3 devices, the enclosure does have two ports so you can daisy chain your devices.

A switch on the back of the device lets you toggle between three fan speeds depending on the working environment.

What drives can I use?

Netstor has provided a compatibility list of drives on their website to let you know which drives will give you the best performance.

The NA622TB3 uses a Broadcom PEX 8714 PCIe switch which allows for RAID 0/1 configurations. If you set up two RAID volumes, you can use them both at full speeds.

The NA622TB3 can be configured in the following configurations:

The setup manual provides instructions on setting up the various RAID configurations in your OS.

Pricing should be available soon with the device shipping in the coming weeks. You will need to factor in the price of the drives as well.