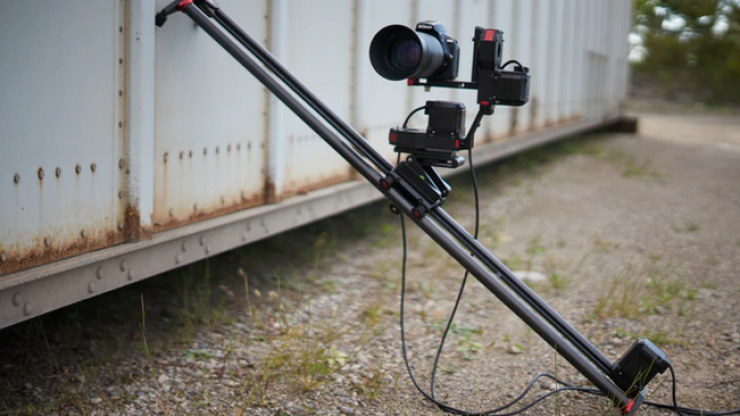 The Axibo can handle payloads of up to 20lb (9.07 kg). This means you could run a wide array of camera and lens combinations.

There are plenty of automated pan, tilt, and slide devices on the market, so why is there a need for Axibo? According to its creators, Robotic camera systems (without intelligence) are far too expensive and difficult to use for most content creators. Axibo brings pro-features and so much more, while also being affordable and easy to use.

What makes up the Axibo?

The Axibo Z1 Pan & Tilt unit provides the core robotic features of Axibo. With this unit you can track, create time-lapses, and automate your favourite footage.

The Axibo slider allows your camera to move along the 1 meter rail at slow or high speeds. This rail can be used with or without the Axibo Z1 Pan and Tilt unit.

Axibo’s can be powered externally using any power bank. You can also clip NP-F batteries on Axibo’s controller. A 8000 mAh Sony NP-F battery will last for 4 hours. It also comes with a wall plug.

Axibo can be used to automate video and photo shoots. Axibo can detect different subjects and follow them whenever they appear in the field of view.

It does this by using a built-in camera. Axibo can also use the feed from your camera to do tracking as well. This way you can set up the tracking with any lens system. From the App tracking settings can be adjusted. Speaking of the app, it will run on any device that can connect to Wifi!. Some features can even be set to run on startup without the app.

According to the creators of Axibo, by using a state of the art A.I. system it can track through light changes and even when objects are partially hidden. Tracking can be paired with other features for automated photo and video.

Axibo’s tracking feature is even useful for standard slider interview shots. Axibo can track a face while sliding back and forth.

Axibo can be configured to do basic pan or tilt timelapse or a complex 3-axis multi-point timelapse. It can even manage your exposure through Bulb or a link to the camera.

Axibo has plans to expand the product’s capabilities by adding firmware updates. They are also looking at the possibility of having different length rails that can be bolted in. The design allows for it, so the ceators are going to get some 8-foot rails and test it out to see if it is feasible.

Above you can see some tutorials about how to set up and use Axibo.

So what does it offer over other automated sliders?

How much will it cost and when will it be delivered?

Axibo is currently in the middle of a Kickstarter campaign. They have already reached their funding goal with 40 days still left to go.

The basic Axibo Pan & Tilt System can be backed for $999.99 USD. As with any crowdfunding campaign there are zero guarantees, so we urge you to consider carefully before backing any project.

Axibo is scheduled to start shipping in April 2020.