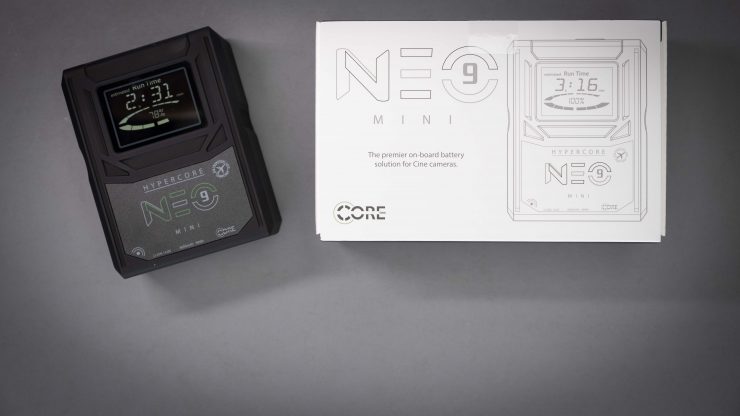 Camera and device batteries are getting smaller, lighter and smarter with excellent capacities these days and I like that a lot.

CORE SWX has a full line of batteries from the massive Hypercore XL V-Mt 290wh down to compact and slim 98wh version. The new Hypercore NEO 9 is one of those 98-watt batteries that is compact but still has features CORE SWX offers in the larger capacity versions.

While I’ve seen smaller 98-watt batteries, the Core SWX has a lot of smart features and a sweet LCD screen on the front of the battery. These extra features do require more room inside so naturally, they will be a bit larger. With that, they still are much smaller and lighter than we have seen in the past.

The shape of the NEO-9 Mini is more square than the conventional rectangle battery. This makes them fit a little nicer on cameras that are also more boxy like the Red and Sony F5 and F55. In general, I like the form factor better as well.

The sweet spot seems to be the 98-watt hour type battery, and that’s for a reason. Traveling with Lithium ION batteries is not simple. You can’t put them in your checked bags so they have to be in carry-on luggage only and no more than 100wh each.

The good news is you can carry-on as many as you like just as long as they are 100wh or less and a camera or other device that uses the battery is also with you. Packing batteries alongside a camera and lens kit will take up a lot of space and make it heavy, so size and weight matter.

The battery housing is a rugged case that has a rubber coating on the exterior. This gives the battery a tacky feeling so it won’t slip out of your hand. As you can see in the drop test, it’s even “Cailin proof!” 😀

More Amps Than You Need

For a battery this size it’s impressive the NEO 9 Mini can sustain 16A peak load and 12A continuous draw. It’s overqualified for lower power-consuming devices. However, it shows it’s built with high power demanding specifications. It is an excellent choice for power-hungry cameras and lights. The 3-stud or gold mount versions of the NEO-9AG model is Anton/Bauer charge compatible and able to communicate to cameras as well as chargers with both one-wire and two-wire protocols.

The LCD is easy to read with the large font. The info on the screen gives you the estimated run time left in hours and minutes based off of a 25w load, plus percentage and a circular indicator that is broken down in blocks. The screen is always slightly on and visible in normal light, so if it’s bright in the environment, you can see the gauges.

In dark situations pushing the button on the side lightens up the LCD as well as gives you yet another way to check the remaining power of the battery.

It’s Not The Smallest or L

None for most batteries, but batteries must be for use by the passenger. Batteries carried for further sale or distribution (vendor samples, etc.) are prohibited. There is a limit of two spare batteries per person for the larger lithium-ion batteries described above (101-160 watt-hours per battery)

guidelines for US travel from the FAA

While a lot of batteries today fit into the travel-friendly 100-watt limit, Core SWX has their batteries UN38.3 certified safe for air travel to make your traveling experience go as smooth as possible without TSA hassle. When traveling, make sure to tape the terminals. This is required for safety even if most TSA personnel don’t know it.

With the option to carry-on basically as many as you want in your bag, the 98wh battery is an excellent choice. CORE SWX has a new Hypercore NEO 9 is 98wh 14-volt battery that is small and light, making it an excellent option for the traveling DP. While the size is smaller the features are still big.

CORE SWX packs a lot of features in all their batteries and the new CORE SWX Hypercore NEO 9 is no exception. The 9 NEO-9 Mini uses the same size casings and Panasonic cells as the current Hypercore Mini and Hypercore Slim battery packs. Being more modular means less wiring inside. More wiring can lead to more failure points, so this is a good thing to have less wiring.

The Hypercore batteries are designed to be compatible with several chargers so there is a good chance your existing charger will work just fine with NEO-9 Mini. Portable charging with the p-tap is also possible. I like this option a lot when traveling light as desktop chargers do take up a lot of room in the case and are heavy. Fast chargers will get you up and shooting quicker.

To protect self-discharge and help comply with travel regulations, the NEO-9 incorporates a storage mode. The packs go to sleep/hibernate when there is no battery usage or movement after 48 hours. Once the battery is picked up, the battery pack awakens. This function allows the battery to hold a charge longer if stored for over 2 days. To enter or exit the /hibernation mode press the side button for 20 seconds.

The Core SWX NEO Mini has a USB tap as well as a p-tap on top of the battery. The p-tap output is rated at 12vdc. Core SWX calls it a “Smart” tap because it also sends out battery data to devices that support the “Smart” technology. This is handy for seeing how much power is left without looking at the LCD instead on the device’s screen.

The USB port offers 5v to power devices like follow focus motors. You can even up a smartphone or tablet via the USB port. I like the protective port covers. They are easy to open and stay open making plugging in the connector easier.

The Neo-9 firmware can be updated through it’s USB port for added features. Core SWX has an app coming soon that communicates with the battery for a more in-depth look at the status. The VoltBridgeID app will be available shortly after the Neo-9 release, however, if you have an NFC reader app, you’ll be able to see the info from the battery using an NFC reader app.

The NEO-9 Mini is a feature-packed battery that does more than just power your camera. The electronics onboard communicate with charges and devices, so it charges correctly as well as let you know how much power is left. I like the build and the grippy texture it has. For those hot and sweaty shooting days, the battery won’t slip out of your hand.

The price is fair for the size and features at $239 US. Yes, you can find 98wh batteries cheaper but if the extra features matter the additional cost isn’t much. The NEO-9 Mini is rated for 2K Cycles and comes with a 2 Year warranty.

As I mentioned early in this review, the market is getting full with small or tiny 98Wh batteries, so we have a lot of options. The Dynacores do seem to be one of the smaller I’ve seen as well as the most competitively priced at $200 US. Here are a few others to look at as well.

The Core SWX NEO-9 Mini are available in V Mount as well as Gold Mount and retails for $239 USD. Available to resellers by mid-September.

To learn more about Core SWX products visit them at coreswx.com