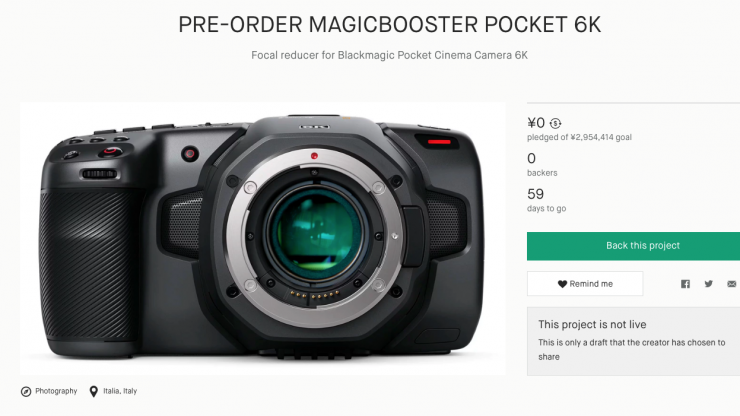 LucAdapters is about to launch a Kickstarter campaign for a Magicbooster that is designed for the new BMPCC 6K.

The Magicbooster is a focal reducer for Blackmagic Pocket Cinema Camera 6K.

“Have you always dreamed of owning a Full Frame camera that shoots 50 frames per second in RAW format? Now is the time to realize your dream! With the special Magicbooster Premium Glass (same as used on the Ursa Mini 4K) you can get a full frame look!”

The BMPCC 6K has a S35 sensor which produces a 1.588x crop factor when shooting in 6K. According to LucAdapters, through the use of their Magicbooster Pocket 6K you can get:

This may not sound very credible at first, but LucAdapters has already been selling Magicboosters for the URSA Mini Pro EF mount. Above you can a video by Matthew Carmody filmed on an Ursa Mini Pto 4.6K using the Lucadapters Magicbooster Pro and Mamiya 645 lenses.

Above you can see a video taken using the Blackmagic Ursa Mini 4K, a Magicbooster focal reducer, and a Canon 50mm 1.8 II lens.

The Magicbooster is not an adapter ring that attaches to the camera body, it is a group of lenses that fits between the sensor and the lens. Above you can see how it is installed and works on an Ursa Mini.

The only real catch is it only works with Full Frame lenses. Lenses built for APS-C cameras will suffer from vignettes at the corners of the image due to the increased image crop.

You can be pretty certain that this modification would certainly void your factory warranty.

Can it actually work on the BMPCC 6K?

According to LucAdapters, there is no risk. They claim to have a lot of experience with Blackmagic cameras, and that they believe they will have no problems getting their Magicbooster to work on the BMPCC 6K.

What will it cost?

LucAdapters Kickstarter campaign is offering early backers the chance to secure a Magicbooster for €499 (approx $558 USD. Estimated delivery is said to be in November this year.

Like any crown funding campaign, we urge you to remember that nothing is ever guaranteed. You may or may not ever receive the product, and there could also be unexpected delays.

Would you potentially buy one of these? Let us know in the comments section below. 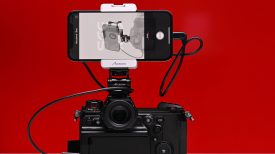