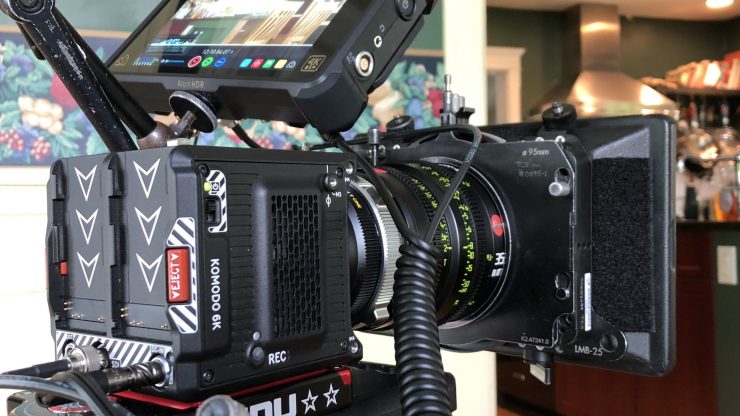 Today we got a much larger picture of the Komodo from director Steven Soderbergh on Twitter. Looks like he is testing the new camera or just having a play with it. He mentions in the tweet being the guinea pig for the Red One 12 years ago.

The adapter looks like the Metabones ARRI PL Adapter. The RF mount is such a good choice. Squarely on top is an Atomos Shogun Inferno mounted with a good ole articulating arm.

The RED Komodo has been given another tease. Jarred Land is back at it again, with yet another Komodo update. The release of information is about as slow as making drip coffee.

RED is clearly trying to drum up hype over Komodo to steer attention away from the Mini Mag controversy as well as the away from the recent BMPCC 6K announcement.

This time we get to see the rear view of the Komodo. It shows a Lemo DC power in, a single SDI out, a record button and what appears to be dual battery plates. They could well be for Canon BP-970G batteries.

What we don’t know is what the sensor size will be and what resolutions and framerates it will record.

Will we end up seeing some sort of Atomos/RED collaboration that involves Komodo? It’s very possible.

Jarred also mentions that they are in the external testing stage with Komodo, but there is still no concrete information about when it will actually be available to purchase.