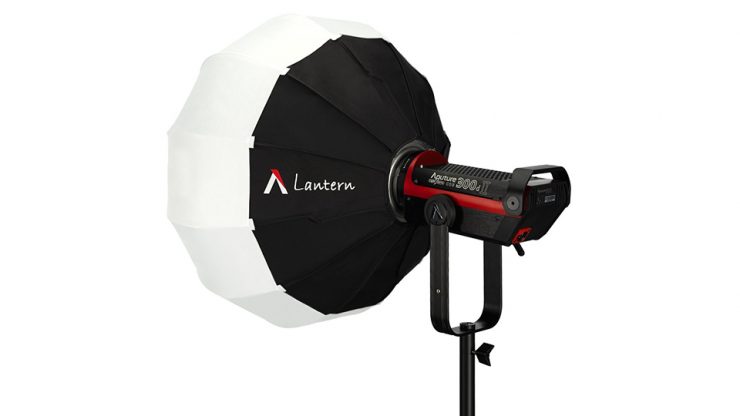 I got a first-hand look at the new Aputure Lantern at NAB 2019 and, I liked what I saw. Lighting modifiers have traditionally been expensive, and Aputure has changed this making the $89. Aputure Lantern as well as the $219. 34.8″ Light Dome II one of the most affordable on the market. However, there is a catch.

When looking into lighting fixtures, I also like to see what type of modifiers I can use with it and how much they cost. The Aputure COB Light Storm fixtures all use the same versatile Bowens Mount that has a ton of 3rd party modifiers available. While they are generally very affordable, they only work on a Bowen’s mount fixture.

Back in the day of hot lights like the Arri 650 you would get a speed ring and then use different types and brands of softboxes. Generally, each fixture required a different speed ring and the rings were expensive. The model above for an Arri 650 retails for $106. Add a Chimera Medium Video Pro Plus softbox that retails for $500, and now you’re in for over $600. The good thing is I also have a Bowens mount speed ring for my older and still capable Chimeras.

Aputure makes several Bowens mount modifiers as well. The 34.8” Light Dome II ($219) and 21.5” Light Dome Mini II ($129). Both are one of the best value modifiers on the market; however, pitching them was a chore. Version two of both solved that issue with a whole new design.

The 16 rods are now attached to the mount and click into place. To break down, push on the release pin for each rod. Done and done! The older way of bending those rods and inserting them was not fast or easy. Now it’s done in a matter of seconds without a lot of effort.

The new Aputure Lantern uses it’s own trickery to make pitching easy too. The Lantern is even faster! The rods are not stiff and bend into position with little pressure. You won’t need to find the guy with the biggest muscles to pitch the lantern.

Instead of inserting each rod into a base it’s already put together. To assemble you slide the fabric diffuser over the frame and simply push it down and clip the end into a U shaped holder.

It’s swift and simple. All that’s left is attaching the skirts and mounting to the COB Light Storm fixture or other Bowens mount light. I love it when the gear doesn’t get in your way. The Lantern doesn’t weight very much coming in at 6.09 lb / 2.76 kg. While that doesn’t seem like a lot of weight when you add a fixture to the mix it can get heavy, so make sure the boom or arm and stand used can handle it.

The kit includes the Aputure Lantern frame with a 1-stop diffusion.

4 skirt sections with sewn-in Velcro for attaching and holding in place when rolled up in sections and a travel bag.

Once the Lantern is assembled you can keep it together and store it in the travel bag.

The new Lantern is a sturdy China Ball and can be used in many different ways. Primarily it’s great for adding soft ambient light to an overall scene by flying it in position. You can use several to boost the overall exposure while maintaining a soft source. Great for green screen. With the four Velcro attached skirts removed, you get a full 360-degree soft source.

Having it as a 360-degree source makes it very useful for round table discussions. If you don’t mind having a lot of spill the Lantern can be used as a traditional key light in the same position a softbox would be in but again without the skirts attached, the light will also fill the room depending on the output of the light used. The Aputure Lantern will decrease the output approximately 1-stop.

I mentioned earlier the Aputure Lantern has removable skirts. The best way to work with them is to leave them attached to the lantern and roll the sections up. With four skirt sections, you can control where you don’t want spill or on the other hand where you want to add some light. The 4 sections have Velcro on them and stay in place.

I like to use Lanterns for overhead product shots. The soft light adds a nice looking highlight that I just love. it’s so easy compared to using a light and a diffusion frame like a 4×4 that requires more space and stands plus grip to set up. Now I slid in some fill or bounce in light to create the look you want.

What Fixture should I use?

Choosing the fixture to pair with the Lantern depends on the output you need. In most cases, the Aputure COB Light Storm 120d II will be plenty but if more light is needed the new Aputure 300d II is a good choice. I had mine set to no more than 30% – 40% for my set up.

You can also use other lights with the Aputure Lantern so long as it has a Bowens mount.

The new Apututre Lantern is great. I have tried a few different methods of overhead lighting and it is my favorite right now. It’s not super wide at 26″ diameter but seems to cover the products I’ve used it with as an overhead. it can also be used for interviews in a round table discussion or like a traditional softbox in a pinch.

When using the Aputure COB Light Storm you will need a fairly high ceiling due to the longer design of the light. For roundtable or sitting interviews I think it will work just fine in most homes.

You have to like a piece of kit that cost under $100 that is versatile. The only catch is you need to have a Bowens mount fixture to use it plus a sturdy light stand and boom arm. I found a C-Stand and a 40″ boom arm to work fine with a counterweight on the other end of the arm. Even better is a boom arm like the Impact one in the picture above. All in all the new affordable Lantern at $89 is a steal and punches way over its weight. It’s a must-have item if you already have a COB Light Storm fixture.