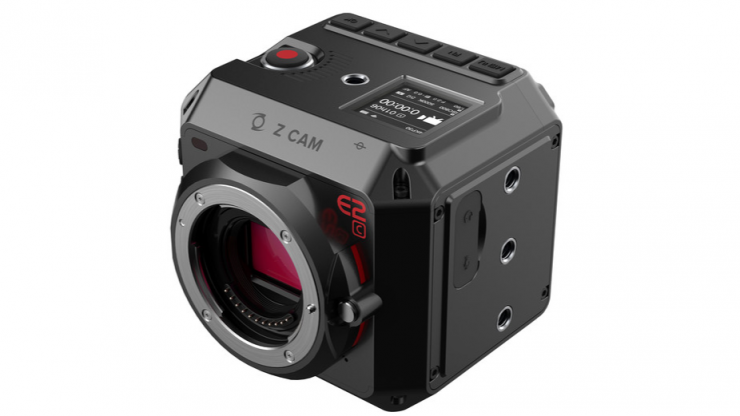 The camera is not exactly new (information about it has been around since March), but it has sort of slipped under the radar. B&H today listed the camera for pre-order.

The E2C doesn’t have ProRes yet. It will be added as soon as certification is approved. Unfortunately, you won’t be able to record ProRes internally on the SD card. An SSD will have to be used via the USB-C output.

For me personally, I see this camera as a nice ‘B’ camera for interviews. Two of them would also make for a very compact and lightweight traveling solution.

How does it differ from the E2?

Below you can see the main differences:

You can use an available iOS app to control the camera via Wi-Fi and to view a live image preview. You can also control it locally by the buttons along the front edge of the camera.

The camera powers via PoE, an LP-E6-series battery, or via a DC input port. An included D-Tap power cable allows you to power the camera from a D-Tap source. An optional AC to DC power adapter can also power the camera. It is interesting that the E2C uses Canon LP batteries, while it’s sibling, the E2, uses Sony L series batteries.

There is also a USB 3.0 Type-C for camera control and data transformation, and an Ethernet port for live view, control, and file transfer to a browser or a computer running Z CAM software. Additionally, the camera has a LANC port for remote control including powering the E2C on/off.

The Z Cam E2C supports MF / AF / CAF, but this will depend on the lens you are using.

A nice addition to the E2

Z Cam has certainly been creating some very interesting cameras. Erik reviewed the Z Cam E2 recently and concluded that:

“The cameras has a very pleasing image with nice color and skin tones. Color science is the most important thing I look for in a camera. The E2 has it.

Due to the small size of the E2 adding devices can be a challenge. When in a cage mounting your accessories is fairly easy depending on how much you need. Adding a riser with rails is a great way to add more kit on the back of the camera. I found my Zacuto Gratical HD fit nicely on the side with minimal kit.

Micro four-thirds isn’t my favorite sensor size. I like S35. It gives me a nice balance of shallow depth and f-stop options. Full Frame can be harder to work with due too the shallow depth of field being so prevalent and closing the iris to control it. With MFT you need fast lenses to get more shallow depth.”

Competition for the BMPCC 4K?

Is the new Z cam E2C competition for the BMPCC 4K? Absolutely. While they share a different form factor, they both use 4/3″ sensors and can record 10-bit 4:2:2 internally*. The BMPCC 4K has the benefit of recording in 4K DCI 60p, while the Z cam E2C is limited to UHD 30p. The Blackmagic offering also has a built-in touch screen, mini XLR capabilities, and it can do up to 120fps in HD.

*With the ProRes firmware update

The Z cam E2C is almost $500 USD cheaper and it will have a lot better battery life.

$799 USD may sound like a bargain, but you will need to add a few items to the E2C to get it up and running. At the very least you will need some sort of monitor, batteries, media, and probably a cage solution. In saying that, all of these items can be found for very little money.

If you already own some Canon LP batteries, an SD card, some lenses, and a monitor, you probably don’t need to spend any additional money at all.

As you already know, the camera will retail for $799 USD. You can pre-order it today and it is expected to start shipping at the end of August.