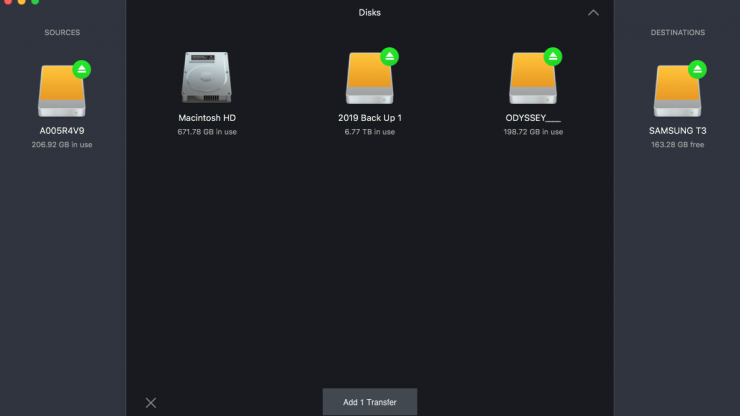 Hedge has released version 19.3, which features a couple of nice changes to make your copy and verification process a little easier.

Backing up and verifying your irreplaceable media is something we all have to do. However, just backing it up and copying it can lead to confusion if you are copying lots of different media and files. When you are in a hurry it’s often easy backup files and then, later on, find out that the file names don’t make any real-world sense to you or anyone else for that matter.

Deciding where your media goes and what it is going to be called is just as important as the actual copy and verification process. Backing up media is about more than merely copying data as fast as possible. To help alleviate this headache, HEDGE 19.3 now features Filtering and Renaming.

Most camera media these days features sidecar, metadata, and thumbnail files, as well as the actual clips. Some workflows require this extra data, some don’t.

For example, if I don’t want to copy across the .ale or.bin files I don’t have to.

Maybe you don’t want to backup all of these additional extra files and you only want to copy over the material you need, well now with filtering, HEDGE lets you decide which file types will be ignored.

I personally like to copy everything across, because in my opinion, these extra files take up very little space, but it’s nice that HEDGE is giving you the option to choose.

When you are backing up files you want to make sure sure you don’t lose track of them. Filenames are usually just a series of letters and numbers and that can make for a lot of confusion when you go searching for a specific clip. By adding some useful info to your clips it makes for a much easier way to manage and recall media that you need.

The case for renaming camera originals is most apparent when working with DSLRs: a typical filename contains an identifier and a file counter. There’s no project name, date, reel, or other contextual information available. Adding at least a Source Counter saves you from the trouble of having files named identically.

Likewise, frame-based media results in vast amounts of files all named something along the lines of A001_C003_00000001. Renaming these files makes sense if you want to add a project name or timestamp, but do not replace the original filename altogether — you want to keep the counter.

Sony cameras generate a folder structure and multiple sidecar files. Depending on your workflow, you either Auto Source the CLIPS folder and copy only MXFs, or you need all sidecar files and thus copy the complete camera card. If you need the whole card, don’t rename — it will break the links to the sidecars containing metadata. If you work with just the MXFs, renaming is fine.

Filter & Rename are part of a new organize settings in the panel. Folders have now moved there. In the future, HEDGE will be adding Presets, Source Review, and Clip Review.