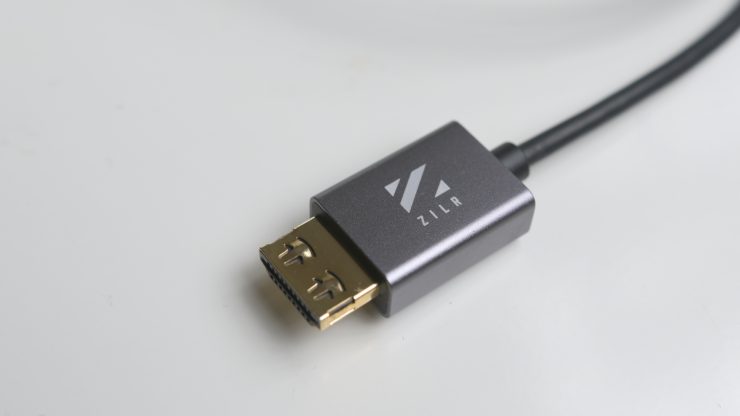 Australian company ZILR has a new range of HDMI cables. These new cables support DCI 4Kp60 and they feature a hyper-thin cable with a low profile and support for a locking Type-A connector to ensure that accidental removal doesn’t happen.

As someone who is always looking for better HDMI cables, I thought I would have a look at these latest offerings to see if they could possibly offer a better solution than other products that are already out there on the market.

The cables come in a nice box (although you are just going to throw it out anyway!), and inside the box you get a pouch, the cable, and a little cable tie.

It may may a small thing, but I like that they include a little velcro tie that you can use to adjust the length of the cable to keep it nice and tidy whether it is on your camera rig or packed away.

A cable is just a cable right?

Surely there can’t be that many differences between HDMI cables? Well, yes, and no. There are various HDMI standards that have to be met for a cable to meet certain classifications. Not all HDMI cables are created equally.

Along with meeting technical specifications, where HDMI cables also differ quite dramatically is build quality, connection strength, and size and weight. I can never quite understand why someone would buy the cheapest possible HDMI cable available to go between their camera and an external recorder. It’s like buying a sports car and putting on the cheapest set of tires you can find. A product is only as good as its weakest link, and in the case of external HDMI recorders, that is always going to be the cable.

Anybody who works with HDMI cables has a love-hate relationship with them. While HDMI cables are relatively inexpensive and easy to source, they are primarily designed for consumers and not professional filmmakers.

The last thing you want is an HDMI cable coming out when you are in the middle of a shoot. If you are recording externally to a camera that doesn’t support internal recording at the same time, you can end up with a situation where a valuable shot is missed, or worse yet, the whole file gets compromised and you lose irreplaceable footage.

Anecdotally we’ve heard some pretty surprising numbers for external recorders being sent back for repair due to them being dropped. If you use a strong cable at the other end then potentially you have a bit of a backup to stop your external recorder/display from hitting the ground if your mount fails you.

ZILR claims that their HDMI cables have an ultra-secure connection (that) ensures that the signal will always maintain without loss. For professionals, this means that you can trust this connection throughout the production.

In fact, the company claims that its cables will hold up to 8Kg (17.6lb). I decided to test that claim to see if it was true, so I plugged in an Atomos Ninja V and held it upside down via the HDMI cable (PLEASE DONT DO THIS AT HOME!).

The ZILR cable easily handled this weight test and the connection didn’t move or loosen at all. In most cases, it is probably more likely that the HDMI input on the device gets damaged as opposed to the cable in a scenario like this.

I also found that the cables give you a very solid locking connection. There is almost no wobble (the wobble actually comes from the HDMI port on a device, not the connector on the cable) and the cable won’t come out unless you really want it to.

I compared the ZILR cables against the Atomos coiled HDMI cable, as well as a collection of other HDMI cables I have from various manufacturers. such as Apple, Kumo, and Elecom.

The ZILR cables had by far the best locking connection of any of the other brands I tested. Cheap HDMI cables tend to be like cheap lens adapters, they wobble around and don’t lock correctly.

I personally hate, large, thick, and bulky HDMI cables. They just end up getting in the way when you are trying to shoot.

The cable is nice and thin and unlike a lot of other HDMI cables, the cable itself is quite flexible which makes it easy to tuck out of the way on a camera rig.

According to ZILR the thickness of 3.5mm is the smallest diameter an HDMI 2.0 cable can physically be that can support 4K DCI 60p. This is interesting, given that the Sanho HyperThin HDMI Cable is only 2mm thick, and the company claims that it is the world’s thinnest and most flexible HDMI cable. However, nowhere is it listed that this cable meets the Premium High Speed HDMI Cable and Premium High-Speed HDMI Cable with Ethernet special certification designation.

All that Sanho’s website says is that the cable supports 4K Ultra High Definition HDMI. I sent a message to Sanho and this is what I got back:

“The HyperThin HDMI cable is v2.0, which supports 4K 60Hz, HDR. It does meet the premium high speed HDMI standard.”

I imagine that although they technically meet the specifications, they don’t have official certification as this is an expensive process to obtain.

ZILR also told me that they could have made HDMI 2.1 cables, however the cable thickness is too large at the moment, but that’s something that is currently being worked on.

Why not make the cable flat?

I asked ZILR why they don’t make their cables flat and they told me:

“All the non-braided cables that are flat tend to be quite wide, we looked into that but decided on a thinner round cable. We personally hate thick cables when we shoot, but it turns out that resonates with a lot of shooters. And also flat cables wind strangely around a camera rig. We find flat cables are better for TVs and Computers etc. when the cable is meant to just sit there.”

The ZILR cables are so thin that I don’t personally don’t see any problem with them not being flat. There is pros and cons for using a flat cable, and you could argue either way that a flat cable or a round cable is better.

Here is what the various cables weigh:

Why not make a coiled cable?

According to ZILR, coiled cables after awhile don’t go back into shape, so you end up with this weird coil that gets tangled up because it doesn’t flex back into position.

I have to agree with ZILR. I’m not the biggest fan of coiled cables. In theory they sound great, but they are considerably thicker and heavier than regular round or flat cables.

All three HDMI cables are 45 cm / 17.7 inches in length. I was curious as to why the cables were only available in lengths of 45 cm so I asked ZILR. They told me “we chose 45cm because it’s a sweet spot for camera rigs, it’s a pain having to tie up longer cables if your rig doesn’t require an extension”.

I don’t think there is any one length of HDMI cable that is going to meet everyones needs. Everyone’s rigs are different, and often it is a case of the cable either being too long or too short.

I personally think that 45 cm is probably the sweet spot for an HDMI cable that is going to be used between a camera and a recorder, monitor, EVF, or wireless video transmitter. I found that the length enabled me to attach an external recorder to a mirrorless camera and I could position that external recorder anywhere on the rig comfortably.

My only concern with a 45cm cable length is if you were using a EVF on a digital cinema camera. It is highly unlikely given the placement of some HDMI inputs on cameras that a 45cm long cable would reach from the back to where you would want to position an EVF.

I also wanted to know if they have plans on making other lengths of HDMI cables, and I was told “we have done a 1m, Full to Full Type A. We could do longer cables for the others if there’s enough interest, but the mini and micro have a more limited audience”.

The cables performed as advertised. They are able to handle a DCI 4K 60P signal and they are easy to use. They lock in tightly (although this will depend on the quality of the HDMI input on your device) and they are strong enough that in the invent of an accident, your external monitor or recorder is unlikely to go crashing to the floor.

I like that the cable is nice and thin as you can easily pass it through gaps in your camera cage. The cable itself it also nice and flexible and easy to manipulate.

There are a ton of HDMI cables available from a wide array of manufacturers. Here are just a few of them that are a similar length:

All three cables are now available to purchase. Here is what they cost:

The cables are available to purchase through Amazon and Adorama, and we’ve been told they will be available on B&H soon. ZILR HDMI cables come with a three-year limited warranty. The warranty covers defects in the material and craftsmanship only.

Cables are not often something that we spend a lot of time researching or testing and I was quite surprised at the differences there is with HDMI cables.

A cable certainly isn’t a cable. If you are relying on a cable as a key component of your system, especially an HDMI cable, it makes a lot of sense to get a decent one. The ZILR cables are well made, they lock in tightly, and most importantly they just let you get on with shooting.