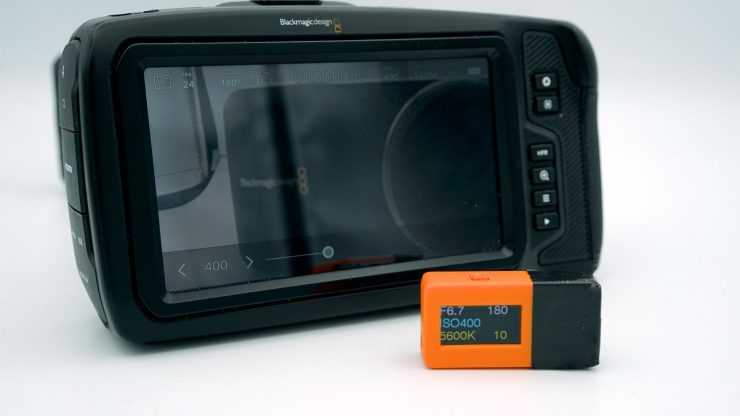 CDA-Tek has shown a prototype of an upcoming product that will launch on Kickstarter in August. The product is called the PBC (Pocket Bluetooth Controller) and will work with both the BMPCC 4K & other Bluetooth LE cameras from Blackmagic Design, such as the Ursa Mini Pro.

Please note that the current unit shown is a prototype, it will look different once the Kickstarter campaign launches, but the compact form will be maintained. The final form will also house a 1/4-20″ hole for easier mounting.

What is the PBC

The PBC is a tiny, and not only provides a simple way to record start/stop the camera remotely but also provides real-time status of the camera’s current aperture, shutter angle, ISO & white balance settings.

Once switched on, the PBC connects over Bluetooth LE to the camera and retrieves the settings within 5 seconds and any changes made on the camera are updated on the PBC screen within 100ms.

The PBC is powered by an internal battery which is recharged via the Type-C USB port and it can also be operated whilst being recharged if required. A full charge will give you 4 hours of run time with the screen set at full brightness.

To toggle the camera record, you simply have to press the single button on the PBC. On the prototype unit shown, it is the black area.

The PBC also houses a bright LED light to provide confirmation whether the camera is recording or not.

What else can it do?

As well as the button for Record Start/Stop, the PBC also has an additional user programmable button on the top of the unit which can be assigned to one shot functions such as Auto Exposure, Auto White Balance or single Auto Focus.

Since the PBC works on Bluetooth LE, you can’t expect long-range distance but you shouldn’t have an issue in most use cases. Bluetooth LE (Low Energy) is rated at 60m LOS.

There is also an expansion port for connecting future peripherals to expand the PBC’s capabilities as a controller including additional programmable switches and a rotary encoder for focus control of electronic lenses. More information about these will be released in the near future. The expansion port uses a serial interface that is specific to CDA-Tek peripherals. It connects with a clip-in 4 pin Molex type connector.

The PBC will be available on Kickstarter in August 2019 at an introductory price of €60.

Since all of the software development work has already been completed, CDA-Tek anticipates the PBC to ship a few weeks after the campaign has ended.