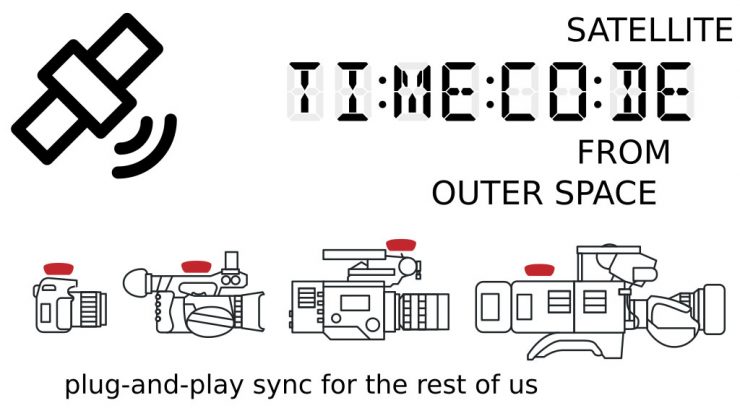 Last month, we recently shared an article about a piece of hardware called Dish Timecode that was in development by Ari Krupnik which used satellites to embed timestamps into files. The project has now been launched on Kickstarter.

The Dish Timecode units receive time signals from satellites and embeds timestamps into files, which allows the files to easily sync on an editing timeline.

Dish has been designed to be plug and play. By using satellite time signals the Dish devices always use UTC so they will never drift. This also allows every single Dish device to provide the same timecode to any camera or device regardless of where it is located. As there is no need to use one device as a master time code source it certainly simplifies the whole process.

The unit itself is quite simple, it simply needs to be turned on and it will sync up to the satellite, identified by a green light. A 1/4-20″ thread can be used to attach it to a cold shoe mount if using on a camera.

Why not just use jam sync?

Jam-sync gets most of the way there. It requires higher-end cameras and a responsible adult to jam them to a master clock, several times per day. In contrast, Dish works with any camera, requires no manual intervention and never drifts.

The Dish records timecode in the LTC format onto an audio track. It was developed by SMPTE and a number of NLEs support it natively, including DaVinci Resolve & AVID Media Composer.

For those using NLEs that don’t support LTC, Ari and the team have developed a free, open-source application called LTCsync which can run on Windows, Mac & Linux to read the LTC format and generate a synced timeline.

The Dish.TC units are expected to start shipping in September 2019. The prices are as follows:

You can learn more about the Dish.TC on the Kickstarter page.