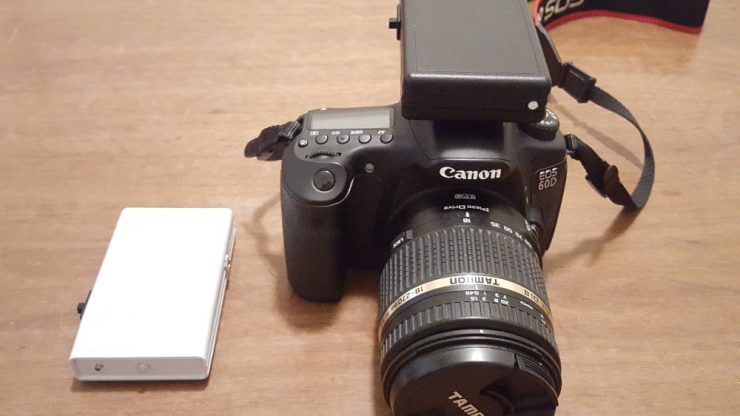 Dish Timecode receives time signals from satellites and embeds timestamps into files, which allows the files to easily sync on an editing timeline.

Dish has been designed to be plug and play. By using satellite time signals the Dish devices always use UTC so they will never drift. This also allows every single Dish device to provide the same timecode to any camera or device regardless of where it is located. As there is no need to use one device as a master time code source it certainly simplifies the whole process.

A Dish master transmitter is in orbit 20,000 km above the Earth–and the government is looking after its health.

Currently, the Dish prototype looks like a small box, but the plan is to make it round, hence the name Dish.

Ari Krupnik is spearheading Dish Timecode. I caught up with Ari to ask him a few questions about the product.

What is your background?

My background is in Cognitive Science. I basically look at how people understand the world, and how to make objects less confusing to people. I spent 15 years in Silicon Valley, working for a string of technology startups including Tesla. A couple of years ago I started working in film and became fascinated with the complexity of the process. I asked myself can I use some of my tech experience to reduce manual labor in film?

Why did you come up with Dish?

I looked at a number of areas and decided that sound sync is a good place to try. There are some excellent products on the market like Tentacle and BETSO, but many people still use the clapper to synchronize dual-system sound. But usually the price is too high, or some people find it to complex to use. So I decided to design a timecode system that is simpler to use than the clapper.

I want to eliminate as many switches and settings as possible, to make a system that you just plug in, turn on and focus on the shoot instead of babysitting the timecode. I decided to base the device on satellite time signals. Satellite time is very accurate, and it’s universal. You never have to jam-sync Dishes. They never drift. They always run on UTC. They work with expensive cameras, and they work with DSLRs by recording timecode on audio tracks.

Will Dish work with my camera?

What do I need to configure before I can use a Dish device?

Nothing. Dish is entirely plug-and-play. You turn it on, plug it in, get satellite lock and you are ready to go.

Does the Timecode get recorded on an audio track?

Yes. This is the most straightforward, lowest-common-denominator way to get timestamps into your files. Camera vendors go out of their way to make sure that picture and onboard sound are synchronized, and the modulation we use was specifically designed to pass through audio channels.

How can I automate sync?

Manual syncing is tedious and error-prone. If you use the same clock to timestamp all the files you record, you can sync them automatically in post-production.

As Dish records SMPTE legal Linear Time Code (LTC) programs such as Davinci Resolve and Avid allow you to select the audio channel as the timecode source. For other NLEs, we are developing a free, open-source, cross-platform desktop utility, LTCsync. You can download the most recent pre-release here. I should add that the compatibility is bidirectional. LTCsync can read and interpret LTC that comes from Tentacle devices or any other timecode vendor.

A number of paid third-party utilities are also compatible, including Tentacle Studio and LTC Convert from Videotoolshed.

Why not just use jam sync?

Jam-sync gets most of the way there. It requires higher-end cameras and a responsible adult to jam them to a master clock, several times per day. In contrast, Dish works with any camera, requires no manual intervention and never drifts.

How do you make sure all of your Dishes are jammed to the same clock?

All Dishes everywhere in the world report the same time-of-day timecode, in UTC (more specifically, in International Atomic Time).

So a Dish will never drift?

It doesn’t. As long as you have access to satellite signal, even intermittently, the Dish doesn’t drift. The satellite signal is accurate to about 60 nanoseconds. By comparison, a 30fps frame is 33 milliseconds long. Satellite timing error is one half-millionths of a frame.

What happens if you lose satellite signal?

How do I connect a Dish to a camera?

Dish comes with an 1/8″ TRS socket. The simplest way to connect it to a camera is plug into an 1/8″ or XLR audio input. If your camera has a dedicated TC input, you can plug Dish into that.

Do I lose scratch audio when I use Dish with my DSLR?

No. Many DSLRs disconnect onboard microphones if you plug in an external input. For just this use case, Dish included a microphone in the Dish. If you plug a Dish into your DSLR, you get timecode on the left audio channel and scratch audio on the right.

What signal does Dish output?

LTC. Linear Time Code is an international standard. Most recent version is available from the International Telecommunication Union.

Do I need to buy into a whole new ecosystem to use Dish?

No. LTC is an international standard and widely deployed technology. Most timecode hardware on the market utilizes LTC, including systems that cost many times as much as Dish. Many NLEs support LTC natively (e.g., Avid, DaVinci). A number of stand-alone software utilities exist that extract timestamps from LTC files. We are working on our own, free and open-source desktop LTC app.

How do you power a Dish?

We’ve considered that and may incorporate it into an upcoming version of Dish if customers want it. One big advantage of AA is that you can always replace them. If your PA forgot to charge the built-in lithium, you’re out for half a day.

Does Dish have any limitations?

Dish gets accurate time anywhere it can get a satellite signal. Anywhere your phone can determine its location, Dish can receive accurate time.

Is there anywhere Dish doesn’t work?

Satellite signals cannot penetrate underground or underwater. Additionally, US export regulations restrict satellite receivers over certain altitudes and over certain speeds. So if you’re shooting on a nuclear submarine, or in a missile silo, or on a missile in flight, Dish can’t get accurate time.

What if I need to shoot underground?

Make sure you turn your Dishes are on and get a signal before you go underground. Your Dishes continue to run on internal TCXO clocks. Your Dish will tell you if it drifts enough to need a re-sync with the satellite.

Doesn’t Dish essentially do the same thing as other systems that are already available?

Essentially yes. If you are happy with your current workflow, we support you in continuing to use it. You probably built your toolset over a long period of time, and we respect your comfort with it.

How much will Dish Cost?

We’re still working out the pricing, but our goal is to make the low-end version affordable to the DSLR crowd. We are actively working on the Kickstarter campaign. I’ll be happy to let your readers know when we have a go-live date. 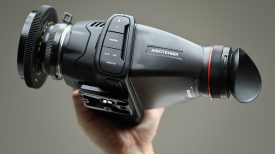