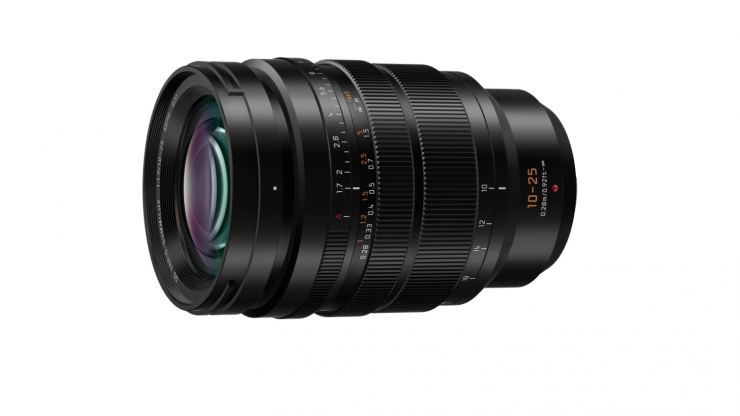 This lens was first teased back in September last year when Panasonic announced that they were developing the first interchangeable lens to be introduced to the market featuring a full-range F1.7 high-speed aperture.

“This new lens demonstrates Panasonic’s commitment to further innovation for the G Series. Videographers will appreciate the versatility the 10-25mm range provides, allowing them to move from an ultra-wide to medium focal length quickly without changing lenses. Such a wide range delivers the equivalent of 4 prime lenses in their kit.”

The lens is aimed as a perfect compliment for photo/video shooters. Much like Sigma’s 24-35mm F/2, the Leica DG Vario-Summilux 10-25mm F/1.7 is more like a variable prime than a zoom lens. With a 10-25mm ((35mm camera equivalent: 20-50mm) focal range and constant f1.7 aperture, it is sure to find its way onto a lot of M4/3 cameras. While Panasonic has probably made it with the GH5 and GHs in mind, it will be right at home on the BMPCC 4K, although the lens doesn’t feature IS.

Panasonic claims that the lens has exceptionally high optical performance and that it is suitable not only for photography but also for video use.

Panasonic says that the use of aspherical lenses and the optimum design of the lens system results in a compact size and lightweight lens that offers outstanding optical performance. They also claim that the optical design achieves exceptional barycentric stability to minimize image shifts during zooming.

The lens is claimed to offer high-speed, high-precision autofocusing. For video shooters, the lens not only features silent operation that is achieved by the inner focus drive system, but it also has a “de-clicked” aperture ring.

By using a focus clutch mechanism use can quickly change between AF or MF. The lens also uses a mechanism that is claimed to suppresses focus breathing, which is good news for video shooters.

The lens features a 77mm front filter diameter so you will have no problem using a variable ND on the front.

Despite Panasonic now pushing full-frame mirrorless cameras and lenses, they still seem determined to keep the M 4/3 system alive, at least for now. Panasonic has clearly stated that the G series will coexist alongside the S series. There are certainly advantages and disadvantages with both full frame and M4/3 sized sensors, but at least Panasonic is giving you a choice.

The lens is expected to retail for $1799 USD, which certainly makes it an expensive proposition for M4/3 shooters. The lens is scheduled to start shipping on the 15th of July.