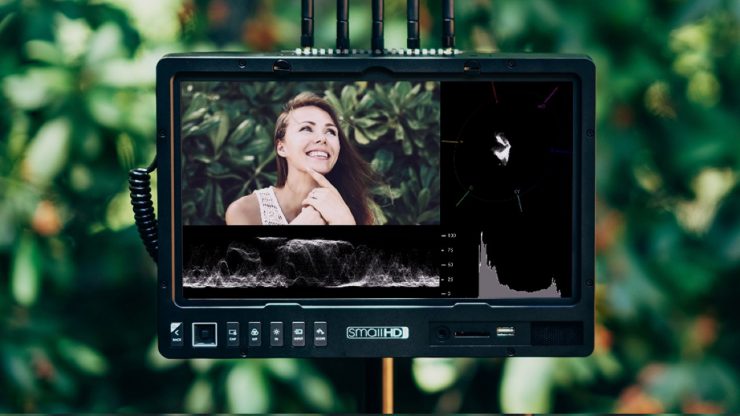 This is a continuation of the recent introductions from SmallHD monitors with integrated Teradek wireless receivers & transmitters.

Interestingly, SmallHD claims that the 1303RX is 10bit, most likely 8+2 FRC but with the 1703RX, they state that it is “True 10-bit”. We’ll be sure to confirm these details at Cine Gear this weekend.

Both models use five antennas on the top and a while they are touch screens, using SmallHD’s intuitive and simple OS3 software, they do feature hardware buttons on the front for quick access to scopes, waveforms and other tools & presets.

Both units have 2x 3G-SDI in addition to the ability to receive a wireless video signal. As well as the inputs, both monitors also have 2x 3G-SDI loop thru, HDMI output & a stereo headphone jack.

The monitors can be powered via a single XLR 4-pin 12-34V DC, 12V Lemo-2pin or Gold-mount/V-mount batteries using optional plates.

A front USB port can be used to connect a USB 2.0 to 5-pin cable for Teradek RT overlays.

Is having an integrated receiver in a production monitor a good idea?

This is a question a lot of people are bound to ask, so I’ll address it from my perspective. No, I don’t think it is a disadvantage having it built-in, and here is why. The Bolt Sidekick wireless receiver doesn’t make the 1303HDR Bolt Sidekick or the 1703P3X Bolt Sidekick much bigger than any other 13″ 0r 17″ monitor, and even if you don’t want to use the wireless capabilities it’s not going to get in the way. The majority of production monitor this size are going to have wireless video RX units attached anyway, so in a lot of ways, it makes perfect sense to just integrate them into a monitor.

Could Teradek and SmallHD just have made a detachable or slot in a wireless receiver? Probably. Would it have been a better solution? Maybe.