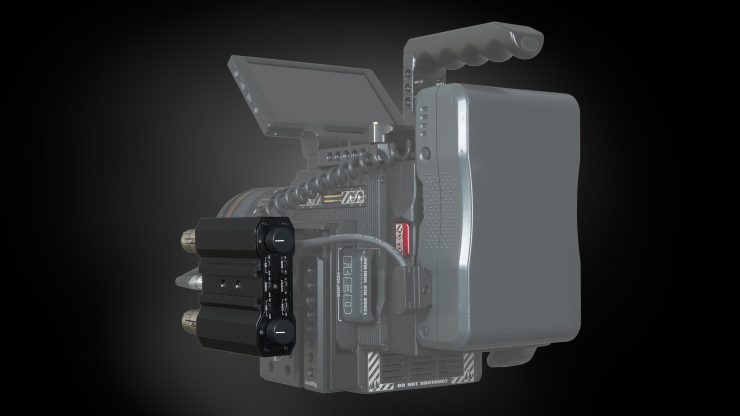 Beachtek has been creating audio products for quite some time and has just released the new DXA-RED low noise preamplifier, specifically made for RED cameras.

Getting XLR audio into RED cameras is not the easiest thing to do as it either requires additional DSMC2 modules the V-Lock I/O Expander ($1,900 USD) or Base Expander ($1,750 USD) which both add a stereo 3.5mm mic input or the newly announced Production module ($4,750 USD) that adds two XLR audio inputs with phantom power. Most people already have at least the V-Lock or Base I/O expander which lets them get audio into their RED camera packages but they don’t have very good audio preamps. This is where the DXA-RED fits in.

The DXA-RED is a compact dual XLR adaptor with a built-in preamplifier with two 3.5mm minijack outputs. Since it uses a standard 3.5mm mic jack output, the DXA-RED could also be used with other devices & cameras, not only RED cameras.

The auxiliary output, sends the same main out signal but is attenuated.

On one side of the DXA-RED, you can find the two XLR mic inputs, along with the two 3.5mm outputs (main & aux). Also found on this side of the unit is the 2-pin LEMO & micro USB port for powering the device.

On the controller side of the DXA-RED, you will find two trim knobs for each channel, 48V phantom control, lo/hi gain switches, mono/stereo output switch and a master power switch. Above each trim knob is an LED light which provides a level indicator for each channel.

The DXA-RED comes with a standard cold shoe mount as well as a quick release mount.

The DXA-RED is shipping now, and retails for USD $499.

If you don’t require powering microphones and just need to get an XLR audio feed in, Wooden Camera sells the A-Box which takes two XLR inputs and converts to a single 3.5mm minijack.

At $499 USD, it does seem on the pricier side when other options like the Sound Devices MixPre-3 which is not only a preamp but also a standalone audio recorder, has three XLR inputs, timecode in & can be used as a USB audio interface retails for $649 USD & the Zoom F4 (6-channels, Timecode in/out, 8-track recorder) can be had for $549 USD. Being a preamplifier only the DXA-RED is a lot smaller than these two units though.