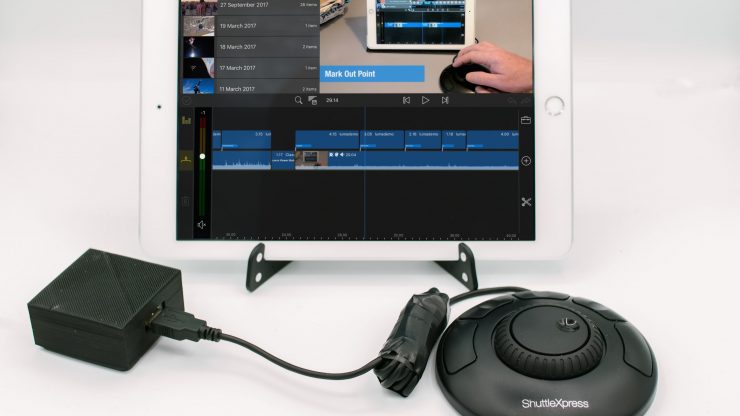 CDA-Tek has shown off a working prototype of the JSC-1 controller which provides an interface between an iOS device running the LumaFusion NLE app and the Contour ShuttleXpress controller.

The prototype is currently housed in a 3D printed case and is not the final form of the finished product.

If you’re not familiar with LumaFusion, it is a popular video editor for iOS devices for editing in the field, particularly with mobile filmmakers & journalists. Some people even use it as their sole video editor using a Bluetooth keyboard.

Currently, there is no support for the Contour ShuttleXpress & similar USB devices with iOS devices. The JSC-1 controller acts as a bridge and connects via Bluetooth LE. The ShuttleXpress controller is attached via USB.

As well as the jog/shuttle wheel to control the transport functions of LumaFusion, the ShuttleXpress also has five keys which are mapped directly to the following functions :

More direction functions can also be used by using Key 1 as a shift key and then pressing one of the other keys. The shifted commands are intended for use in the source viewer and provide the following additional functions :

Users will be able to re-assign the buttons manually.

Since the JSC-1 connects wirelessly to the iOS device, it also needs to be powered. It has a built-in battery as well as an additional USB port for charging/powering the device.

Currently, the prototype works with the smaller ShuttleXpress but CDA-Tek is also planning to support the larger Shuttle Pro at or soon after launch.

For users of our 3C Cinema Camera Control app for the Blackmagic Pocket 4K camera, the JSC-1 will also enable them to use the ShuttleXpress as a wireless focus controller for the camera with coarse/fine focus adjustment, A/B focus memory writing and recall, aperture adjustment and Record/Stop control. CDA-Tek will be releasing a mount that enables the JSC-1 and ShuttleXPress to be rail mounted in a vertical orientation similar to a traditional follow focus controller.

When will it be available?

The JSC-1 will be available for pre-order from the CDA Tek website in July and start shipping in August. We’ll continue to follow the development of the product to update our readers when it goes live.

Pricing is expected to be under €99 for the JSC-1.

The Contour ShuttleXpress retails for $59.95 USD and the Shuttle Pro for $99 USD. They are compatible with Windows & Mac OSX and compatible with most NLEs like FCP X, Premiere Pro & DaVinci Resolve.