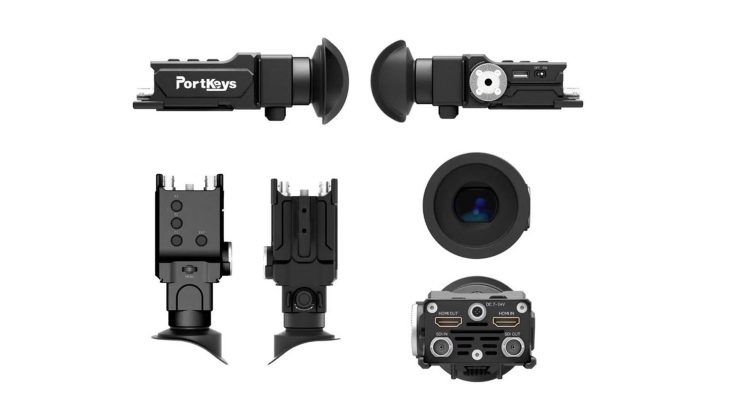 Today has announced Its new entry to the EVF marketplace with the OEYE-3G EVF.

Something that is a bit surprising to me is how few options we have when it comes to aftermarket EVF’s. Zacuto recently announced the addition of the Kameleon that looks to be similar to the Eye. There are also options from companies such as Cineroid and Kinotehnik.

Both the Cineroid and the Kinotehnik have been around for many years. Matt was using the Kinotehnik LCDVFe with his Sony F3 and Sony FS700 back in the day.

The new PortKeys OEYE-3G EVF is short on info at the moment but it will be shown at NAB 2019. Here is what we know so far. The tiny OLED panel is 0.7” and full HD 1080p with 4K HDMI in/out and 3G SDI in/out. For controls, it will have brightness level, waveform, 3DLUT, and a diopter. Portkeys OEYE-3G EVF will be launched at NAB booth #C12030.

From the looks of the design, the EVF needs external power as no battery plate is available. A 7-24V Lemo connector is available on the back alongside the inputs. For mounting it uses a single ARRI Rosette on the side.

I think the main reason we haven’t seen more this party EVFs being produced is that they often become a tangled mess of cables. Not only do you need to power them off a D-tap or a battery plate, but you also have to run an HDMI or SDI cable all the way from the back of your camera to the front. There is also the pain of finding a good mounting solution that works on your camera. If you happen to be using an external recorder with your camera, you also need to run a loop through from the recorder or the EVF. This causes additional problems as you want camera overlays going to the EVF, but not to the recorder.

Pricing for the OEYE-3G EVF will be $1199 USD, and the shipping date is set for May 1st. We will check it out and bring you all the developments on the EVF from NAB.