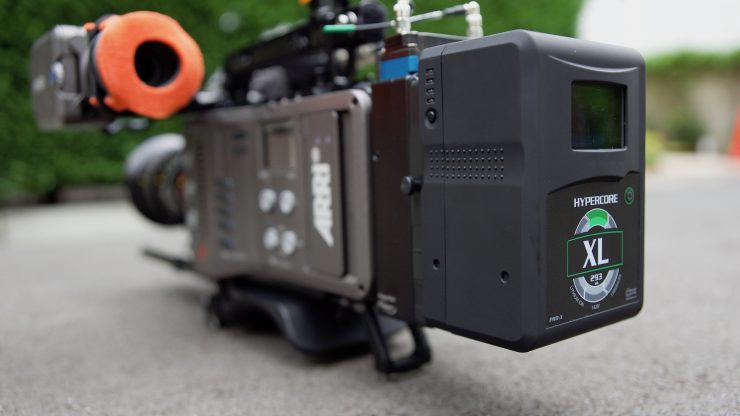 Powering high draw digital cinema cameras and high output LED lights for extended periods of time can be tricky. Recently we have started to see more high capacity, high draw lithium-ion batteries start to come out. One of these is the Core SWX 293Wh Hypercore XL that is available in Anton Bauer gold-mount or v-mount.

The Lithium Ion battery was created by Sony back in 1991 and it has been a constant battle for battery manufacturers ever since to keep up with the ever-increasing power demands of new products. As consumers we are are always looking for cheaper, higher capacity, smaller size lithium-ion batteries.

Safety still remains a primary concern when it comes to lithium-ion batteries. Airline regulations have gotten tougher and tougher over the years due to the increasing amounts of incidents from transporting batteries. The majority of airlines will not allow you to travel with lithium-ion batteries that have a capacity that is greater than 160Wh. 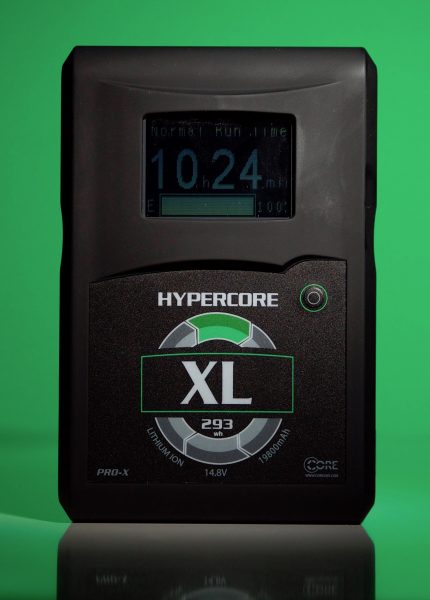 The Core SWX  293Wh Hypercore XL is certainly not designed for airline travel, but instead, was constructed with the specific purpose of handling and sustaining high power draws. The cells in Hypercore XL can withstand up to a 15A draw (20A peak) for extended periods of time while not diminishing service life. According to Core SWX, the HyperCore series delivers the most value and ROI for those who require battery packs to stand the test of time and deliver unrivalled performance.

Some high-end digital cinema cameras such as the ALEXA LF draw 120W and 160W while recording (with an EVF-1 and wireless video transmitter on, but no further accessories attached).

160W has been measured while recording ARRIRAW at 90 fps in LF Open Gate sensor mode onto SXR Capture Drives. 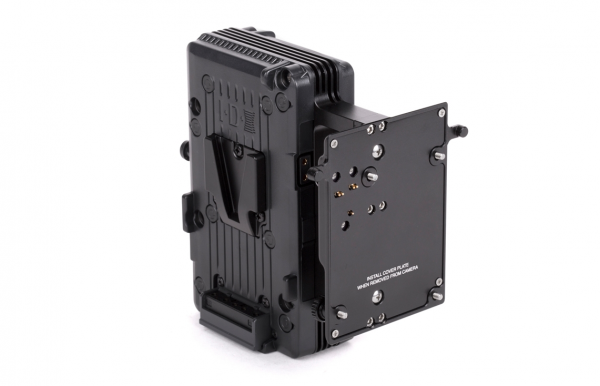 The Core SWX 293 Wh Hypercore XL, just like other 14.8V V-lock or Anton Batteries will only power the ALEXA LF when they are attached to the Wooden Camera ARRI LF Shark Fin dual adaptor. The high current delivery of the SWX 293Wh will certainly be useful when used on the Wooden Camera option.

It will not work with the Bebob BAB-HV adaptor plate (ARRIs preferred option) or Hawk Woods Reel Power 26V plate. The SWX 293Wh will not work on the Hawk Woods 26V Reel Power LF adaptor plate because they are 14.8V and have different pin orientation. They don’t work on the BAB-HV adaptor plates, which only work with the double pin sets of Bebob V-CINE batteries. The V-CINE batteries ability to supply 20A is due to multiple pins sets sharing the load supply: there is a recessed pair of pins above the V-lock at the top of the V-CINE battery and the traditional V-lock pins at the base. 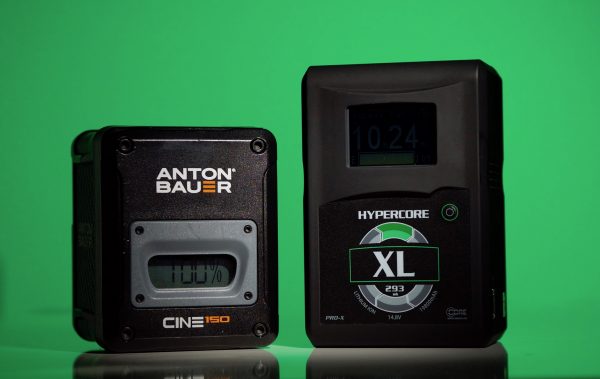 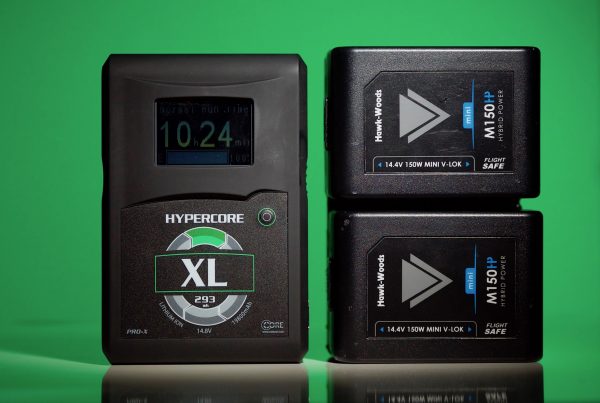 As another comparison, you could use two Hawk-Woods 150Wh mini V-lok batteries with a VL-MCF1 dual battery plate to create a similar Wh capacity, but that combination weighs in at 3.7lb (1.68kg), which is more than a single Hypercore XL. 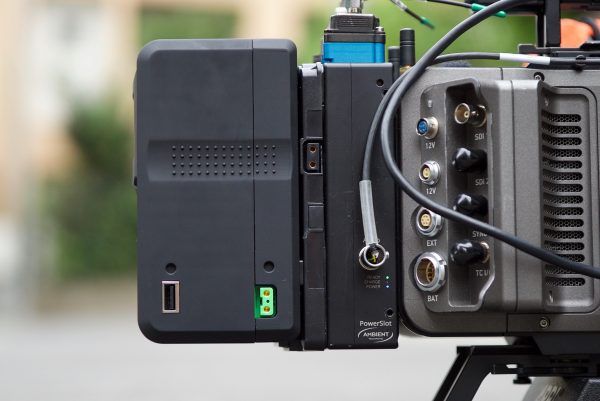 I found the profile of the battery worked really well on the ARRI Amira, as it was a similar height to the camera. 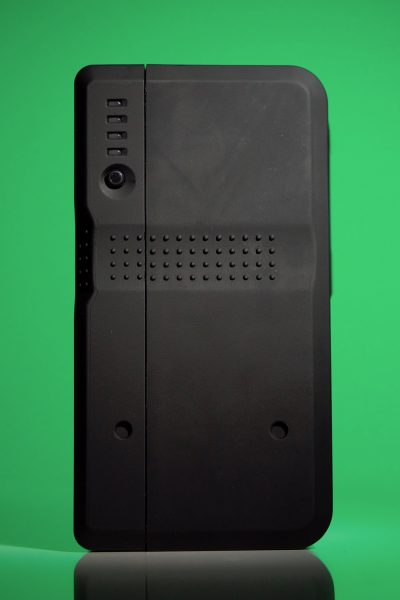 The battery cells are encased in an over-molded, rubberized housing, which has been the same way Core SWX’s batteries have been designed for the last 8 years. This case provides additional protection against accidental impacts, and the rubber texture reduces the chance of the battery slipping out of your hands. I like that Core SWX has placed little rubber bumps on either side of the battery. It makes gripping it, especially when you are wearing gloves, a lot easier. This attention to detail shows that someone has actually thought about how the end user will actually use the battery in the field. 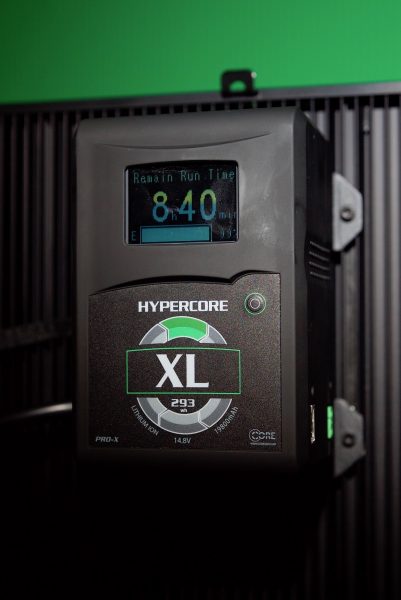 The battery pack also has a multipurpose Runtime LCD on the front to give you quick and concise information about your battery. This LCD informs you how much time you have left when in use (in hours and minutes), as well as providing an estimation based on a dummy load of 30w, when in standby (disconnected from any devices). When charging the battery the LCD serves a third purpose as a charge indicator, by computing remaining charge time. I like the LCD screen, it is easy to see and provides you with key information you need.

Additionally, there is also a 4-stage LED display on the side of the battery, which can be used to glance at leftover battery capacity. 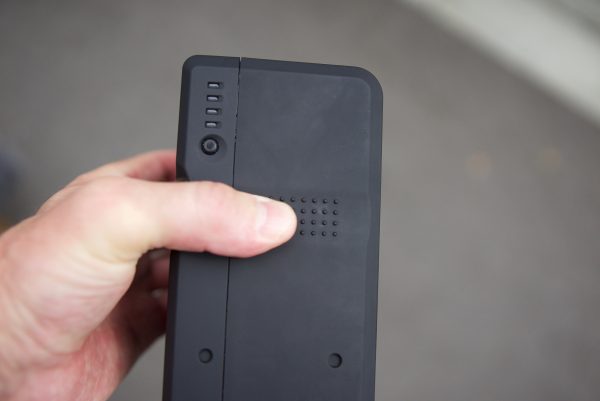 Each battery is outfitted with an accelerometer to detect motion, a similar component that is in mobile devices. The accelerometer is tied to a clocking algorithm to gauge how long the battery is not in use. One of the issues with all battery packs is self-discharge when not in use. Hypercore battery packs go to sleep or hibernate when there is no battery usage or movement after a 48hr period. The LCD shuts down as well to preserve the state of charge. Once you pick up the battery, or the battery detects the slightest movement, the battery pack awakens, coming back to life at its maximum capacity. 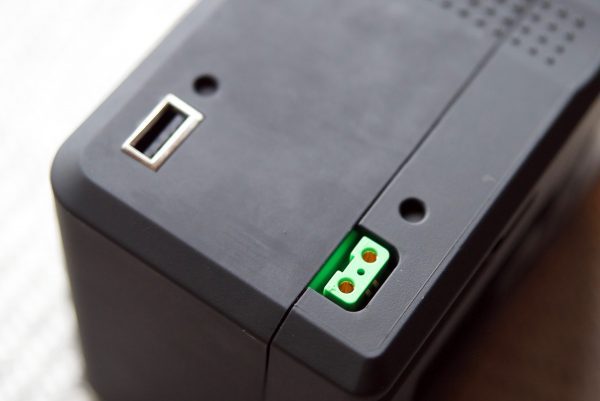 Like all Hypercore batteries, there is an integrated, unregulated P-tap connection on the side of the battery allowing you to power any device accepting 12-16.8 VDC. In addition, there is also a USB 5V power output. Having a built-in USB port is very handy in this day and age when we are carrying around mobile devices that are essential for filmmaking and need to be charged. I personally prefer to have the D-tap ports on my batteries on the top as you don’t have to run a cable all the way down the length of the battery. On a battery with this much capacity, I would have preferred to have seen an additional D-tap connection.

When I asked Core SWX about why they put the D-tap where they did they told me, Regarding the D-tap being on the bottom, there is no specific reason, it’s just the way we have been designing our packs from the beginning. We do have a D-tap on the top of our two other batteries, the HC9 Mini and the Hypercore Prime.

The D-tap on the battery is green because it’s a new D-tap that Core SWX has started to put on all of their batteries so SMBUS data can be used. Core SWX is working with other third-party companies to be able to have the remaining runtime info show on their monitors or viewfinders.

When I asked Core SWX why a battery with this capacity only has a single D-tap port I was told, We didn’t feel it was necessary to put an additional d-tap on the battery because we feel they are going to mainly be used for high draw light panels or cameras such as ARRI which have other power outputs available. 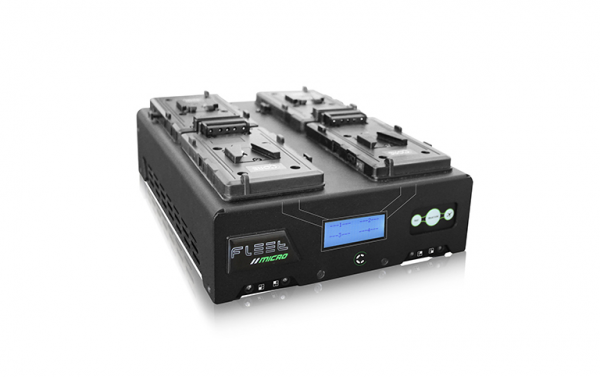 Any charger within Core SWX’ charger lineup will charge Hypercore, but according to the company, the battery series is also the most cross-platform, charger-compatible in the industry today. The V-mount offerings (Hypercore S) will also charge on IDX and Sony chargers, allowing you to maximize service life out of your current charger. I tried charging the Core SWX 293Wh on both Anton Bauer and IDX chargers and they both worked. 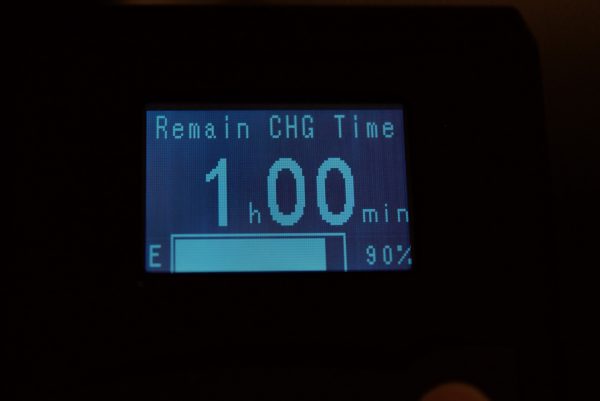 What I like about the batteries is that you can press a button and up on the LCD display it will tell you how long the battery has remaining until it is fully charged. This is a nice feature and it takes the guesswork out of knowing how much longer you have left before the battery is fully charged and ready to go. 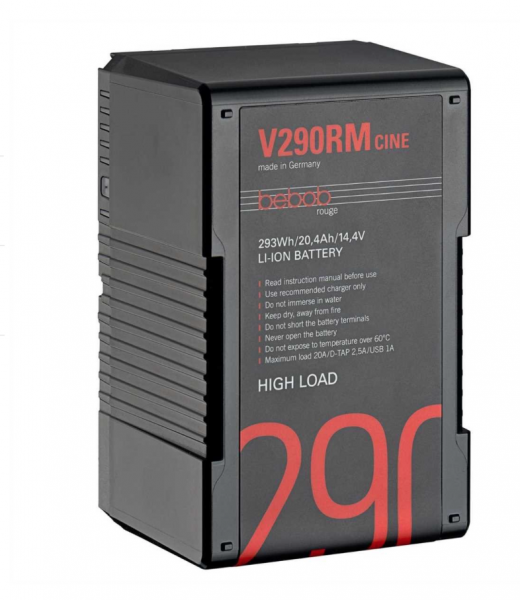 There are a few other similar capacity batteries that I know of, such as the Bebob Factory GmbH V290RM-CINE 14.8V 293Wh High Load V-Mount Li-Ion Battery ($925.00 USD). It has a higher maximum load of 20.0A. When using the battery with video or lighting equipment, the power consumption of the equipment must be 20.0A or below. For the protection of the battery, a load of 20.0A or over may activate the internal protection circuit and stop the supply of power. In this case, the Fuse will self-rest after a couple of minutes.  The Core SWX 293Wh Hypercore X can only take a maximum load of 20A for 2 seconds. 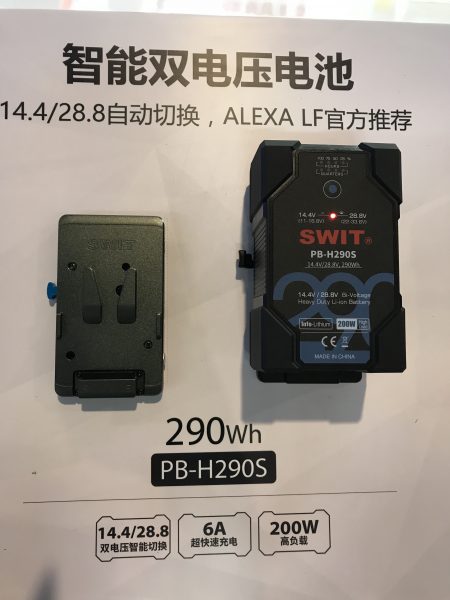 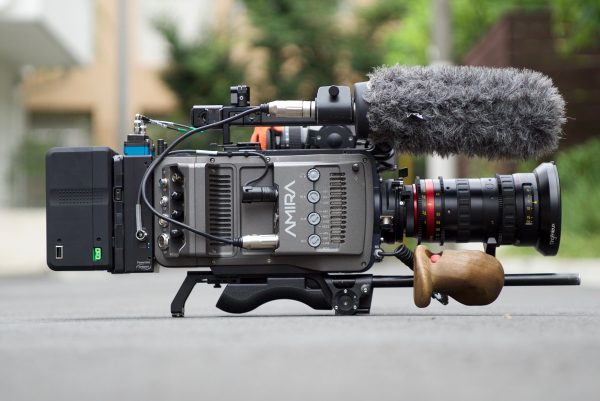 The Core SWX 293Wh Hypercore XL certainly packs a punch and I found it a great option for powering my ARRI Amira for long periods of time. If you are shooting long interviews or need to move away from where you have spare batteries, it gives you the peace of mind that you can keep powering and running your camera for hours on end without having to worry about carrying an extra battery. The Amira, for example, draws around 50W. Even when running an EVF and dual radio mics I was able to get close to four hours of use out of a Core SWX 293Wh Hypercore XL battery. 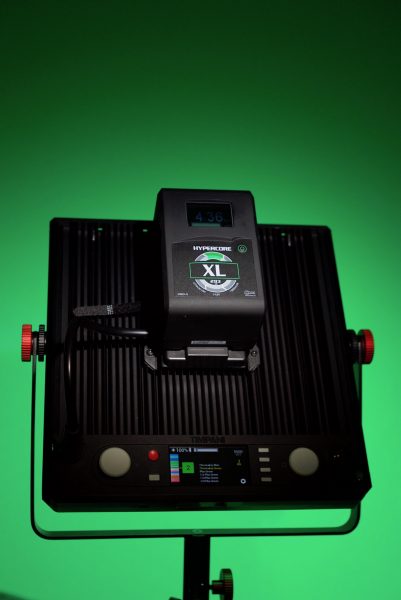 The other great use I found for the battery was when I needed to power high draw LED lights for long periods of time. A growing number of RGBW lights require a lot of power, and having a battery with a 293WH capacity means I could leave a light running for a few hours without needing to change over the battery. This was very important when shooting long documentary interviews in the field where you don’t want to have to tell everyone you need to stop to change over a battery. 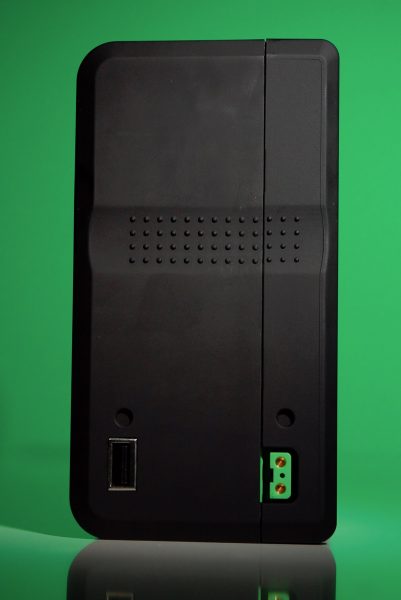 Batteries are often one of those products we take for granted. Buying batteries is a lot like getting new tires for your car, people often just look for the cheapest option available. In most cases, if you buy a generic cheap battery you are going to get what you pay for. A good battery is well made, reliable, keeps its charge for a longer period of time, and ultimately it is money well spent if you factor in how many years you can use it for. 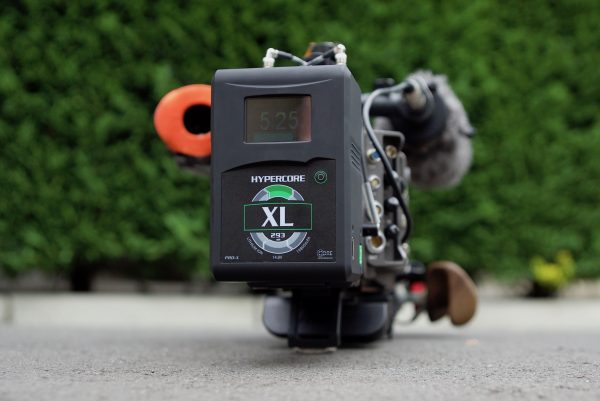 The Core SWX 293Wh Hypercore XL certainly isn’t a battery for everyone. You can’t travel on aircraft with it, and it is large and heavy. In saying that, it does provide an enormous amount of runtime for cameras and devices that are power hungry. It also allows you to run very high draw LED lights where you don’t have access to mains power. If you are using a high draw digital cinema camera such as an ARRI, it allows you to shoot for hours on end without having to worry about swapping over batteries.

The Hypercore XL is well made, well thought out, and most importantly it delivers on powering high draw devices with a minimum of fuss.