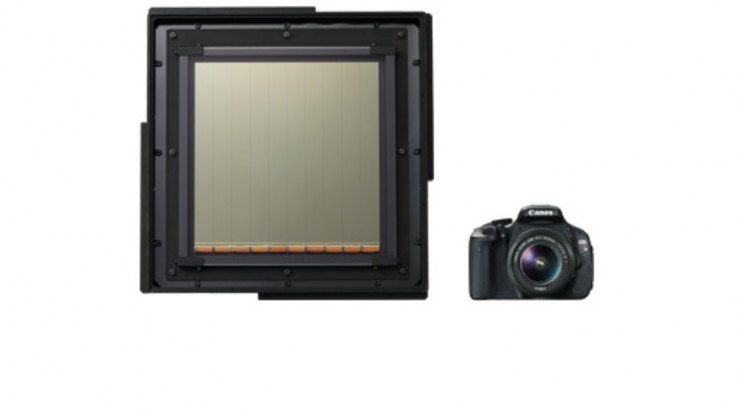 Canon has been researching and developing large CMOS image sensors for quite some time,  but their latest sensor takes things to a whole new level. Canon has not only developed but also successfully used a massive CMOS image sensor measuring approximately 20 cm square. At present, the standard diameter of the silicon wafers on which CMOS sensors are fabricated is 12 inches (approx. 30 cm). As such, a 20-cm-square sensor is the largest size that can be manufactured based on these dimensions and is equivalent to nearly 40 times the size of a 35 mm full-frame CMOS sensor. Yes, you read that right, 40 times the size of a 35mm full-frame sensor!

If you thought previous Canon CMOS image sensors such as the 250MP APS-H-size (approx. 29.2 x 20.2 mm) CMOS sensor (19,580 x 12,600 pixels) was large, it pales in comparison to this monster. According to Canon, that 250MP sensor when installed in a camera, was able to distinguish the lettering on the side of an airplane flying at a distance of approximately 18 km from the shooting location. The size of a 250MP RAW stills image would be somewhere in the region of 300MB. With 30x the resolution of 4K, it is scary to think how big the video files from any camera that had this sensor would be. It boggles the mind to think about not only the file sizes but also the type of magnification a 20-cm-square sensor is capable of.

This latest sensor really is a feat of engineering. Creating large CMOS sensors is not without its problems. You need to overcome problems such as distortion and transmission delays when the electrical signals are converted from light. To resolve these issues, Canon has used a parallel processing circuit and as a result, the sensor is capable of shooting video at 60 frames per second with only 0.3 lux of illumination (approximately the same level of brightness as that generated by a full moon). To put that figure of 0.3 lux into perspective, the Sony a7S II is capable of capturing images at 0.67 lux, 1/16 fc.

Being able to work in conditions with just 0.3 lux of illumination makes it perfect for shooting celestial objects in the night sky, nocturnal animal behaviour, auroras, and any other applications where low light shooting is required. Canon installed one of these sensors in the 105 cm Schmidt telescope at the Kiso Observatory in Nagano Japan. By using this ultrahigh-sensitivity sensor it was possible to capture the world’s first video recording of meteors with an equivalent apparent magnitude of 10, a level so dark that image capture up until now had been impossible.

Canon’s latest sensor is probably not going to find its way into a professional still or video cameras anytime soon, but it does give us a very good indication of what is currently possible.