DJI no doubt makes the most popular drones with 3-axis stabilizers on the market today and they are not stopping there. At CES 2018 in Las Vegas, DJI introduced the Ronin-S handheld gimbal for hybrid cameras. The Ronin-S is DJI’s first single-handed stabilizer for DSLR and Mirrorless Cameras. 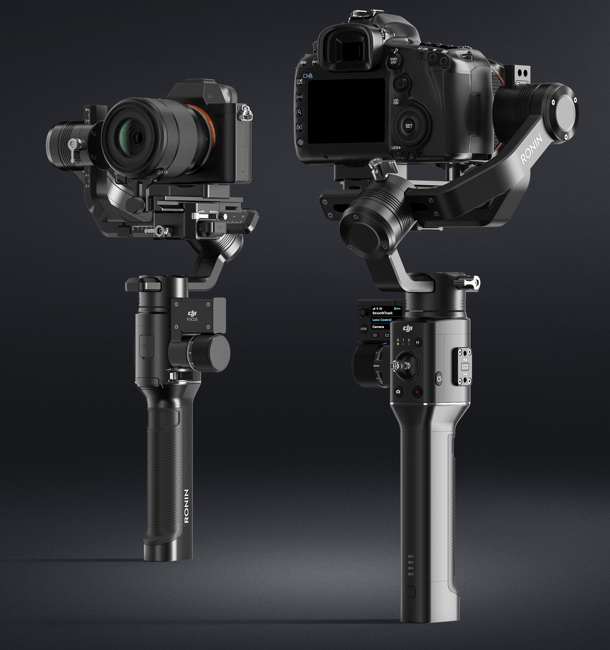 The Ronin-S has powerful high-torque motors that support a payload of 8 pounds to accommodate the popular camera and lens combinations including the Canon 1D and 5D, Panasonic GH and Sony Alpha series.

An interesting and useful feature is its stabilization system that compensates for zoom lenses with external zooming barrels and higher magnification ratios, while its advanced stabilization algorithms work with both in-camera and in-lens optical stabilization technology. When mounted to a vehicle, the maximum operation speed has been tested at 47mph with a Panasonic GH5 and 50mm lens utilizing an optional top hot-shoe bracket. 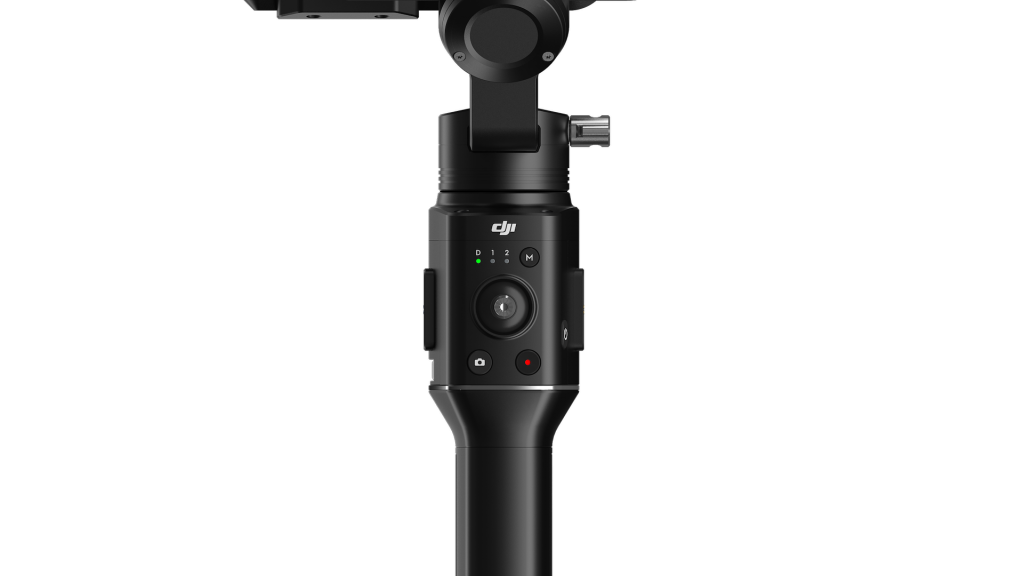 Ronin-S was designed for easy setup. A new Push Mode lets you adjust the pan, tilt and roll axis by hand while the Ronin-S is powered on and an Auto-Tune function automatically adjusts the strength of the motors to speed up gear prep. The Ronin-S has a comfortable, ergonomic design that helps capture smooth cinematic movements from upright to flashlight mode to underslung positions without obstructing the camera’s display. 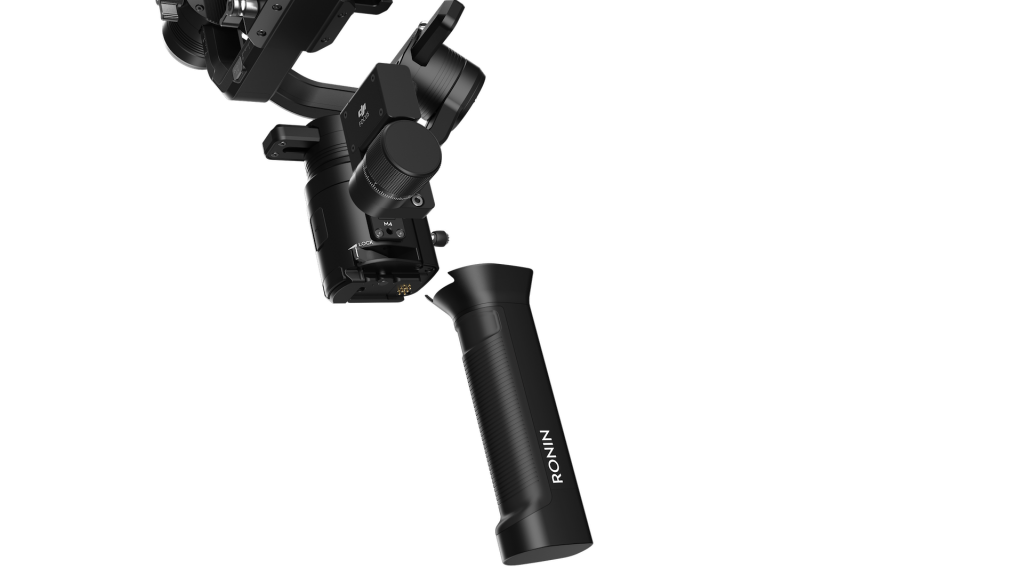 Ronin-S also features DJI’s intelligent battery system that is built into the handle and has an operating time of 12 hours. 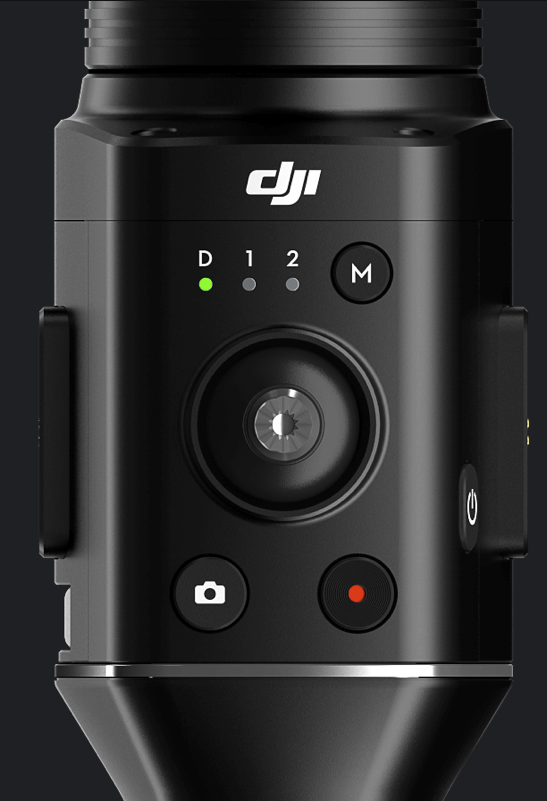 The high-precision joystick changes the camera position to help frame your shot easily while a host of dedicated buttons allows operators to control various settings such as toggling between SmoothTrack profiles or to begin and stop recording. An included Focus Wheel can be mounted to either side of the handle via the 8-pin ports on each side and a new Sport mode allows seamless transitions to fast movements with tight and quick subject following speed.

Shooting modes and advanced customization on the Ronin-S is available through the DJI Ronin mobile app. Complex camera movements can be created automatically including Panorama, Motionlapse, Timelapse and Track, that lets you designate specific camera positions in a scene and rotate between them on demand. Operators can also change SmoothTrack settings including the Speed, Acceleration and Deadband for each axis, save them in three profiles and toggle between them with the dedicated M button on the Ronin-S. Vital camera settings can be directly adjusted via the Ronin app and the optional Focus Command Center accessory allows for quick changes when needed.

The gimbal uses an industry standard Manfrotto quick release system and is compatible with a variety of DJI Pro Accessories to capture any scene and expand your creative freedom on set or on location. Supported optional accessories include a Focus Command Center consisting of a menu screen allowing for the advanced gimbal, camera, and focus control without a mobile device; DJI Force Pro; DJI Master Wheels; the Ronin 2 remote controller; and an external focus motor for manual lenses that pairs with the included Focus Wheel.

A very nice feature that the GH5 has over the others is the ability to pull focus with the Ronin-S. 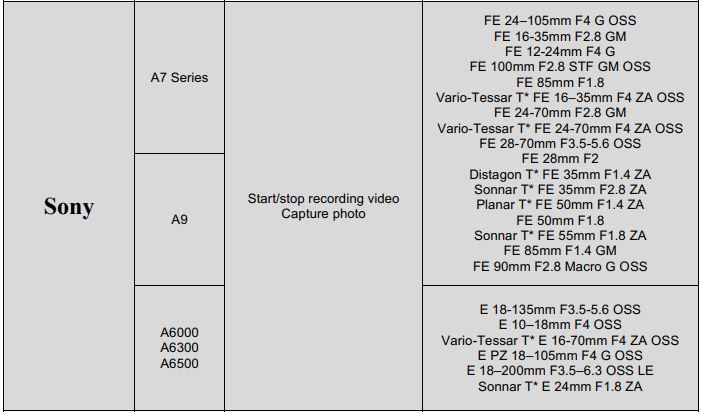 Sony users will only have record start/stop and photo capture.

DJI states the gimbal can also be used with the “DJI vehicle mount”. I have not seen this product before other than the OSMO car mount that I believe wouldn’t be adequate for the Ronin-S. It can also be used on a jib mount and with the “dual-handle system” for when an added level of comfort and stability is required. Again I’m assuming the dual-handled system is another product we will see soon. I personally like the dual-handle configurations and would like to see how DJI will implement it with gimbal controls.

The Ronin-S weights Approx. 3.3 lb(gimbal only), Approx. 4.1 lb (gimbal and grip included) It’s definitely on the heavier side.

The Ronin-S comes with a lot of options and kit to support multiple configurations making the Ronin-S a very an interesting first entry into the mirrorless and DSLR camera handheld gimbal market. Now the real question is how well do all these pieces of kit actually work together.

The Ronin-S will retail for $699 USD with pre-orders beginning May 29 at www.dji.com, DJI flagship stores and authorized dealers worldwide, with shipments starting in late June.