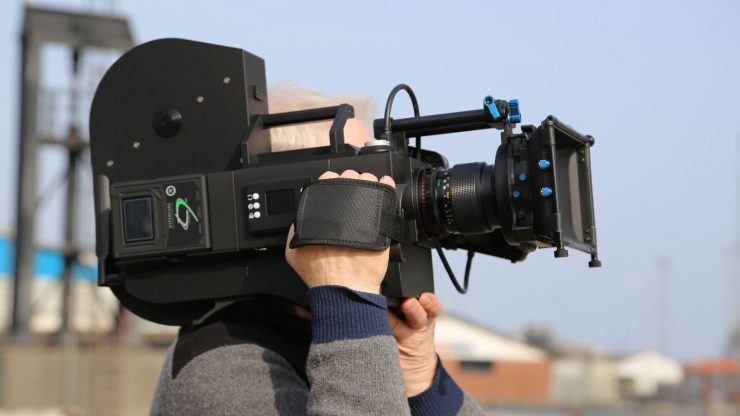 The Magellan 65mm from Danish company Logmar Camera Solutions, is a brand-new, fully electronic, hand-held and ultra-light all-purpose film camera that perfectly marries the best of digital technology with the characteristic look and feel of 65mm film.

65mm film cameras have traditionally been large, heavy beasts that keep chiropractors in business. The 70mm camera package used on Christopher Nolan’s “Dunkirk” weighed over 40kg ( almost three times the weight of most ARRI Alexa rigs), but the Magellan weighs less than 12kg (26lbs) in a ready to shoot configuration including lens, film (500ft magazine) and battery. 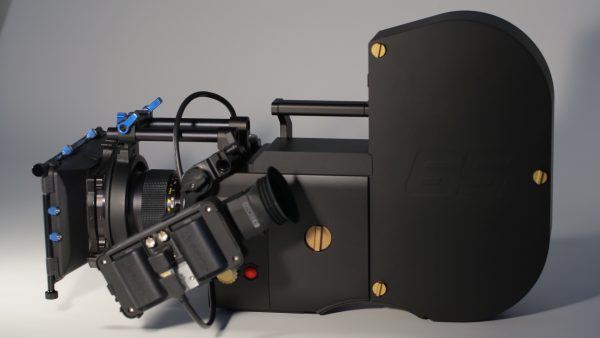 The Magellan camera looks like an engineering masterpiece and it takes a lot of its design cues from the past. In some ways, it looks like a cross between an ARRICAM ST and a modern-day ALEXA MINI. I personally love the look of the camera as it has a real edgy industrial feel to it. 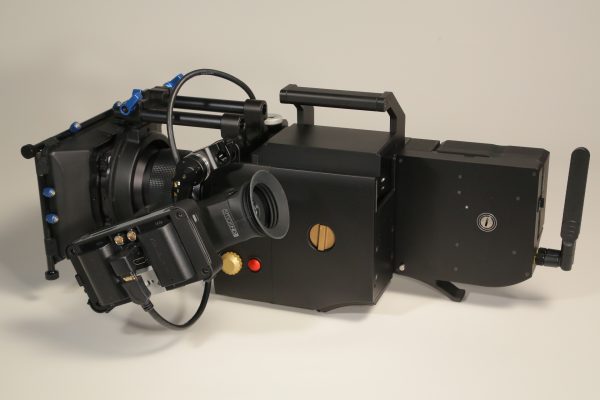 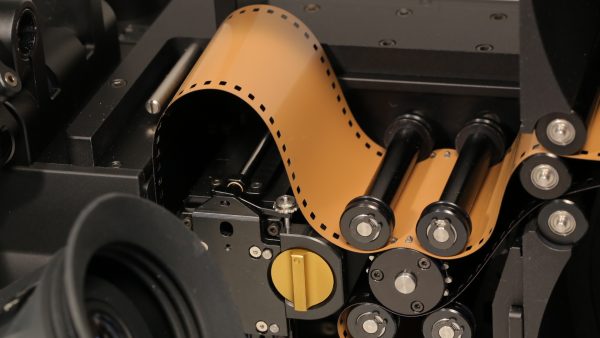 Anyone who has used film camera before should be fairly comfortable in changing out the film and making adjustments. With the film door open and the top-hat removed, users have quick access to the film path as well as a set-screw for pitch adjustment. The loading button which opens the rollers pushes back the pressure-plate and retracts the registration pins. 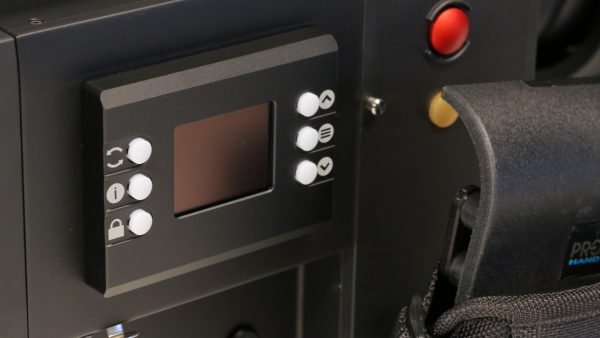 The camera has a side LCD screen and six function buttons for making camera changes and checking the film capacity. Running statistics are also displayed in addition to being shown in the viewfinder. Speaking of viewfinders, the Magellan has been designed to allow the use of third-party electronic view-finders through a HDMI output. 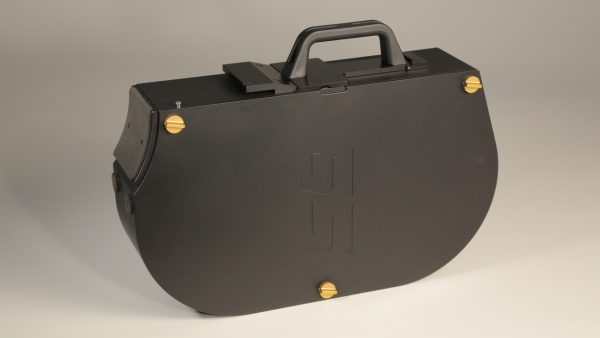 The Magellan can shoot anywhere between 2 – 54fps and records to a 400/500ft top mounted magazine which gets you just 4 minutes of runtime. There will also be a 1000 ft (305 meters) magazine which gives you 8 minutes of runtime that will become available with the Magellan Mark II. Shooting on film is an entirely different beast to digital. With such short record times you really need to be very mindful of what you are doing and it certainly requires a lot of discipline. 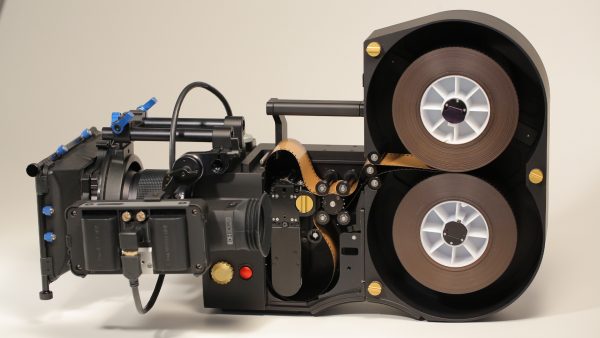 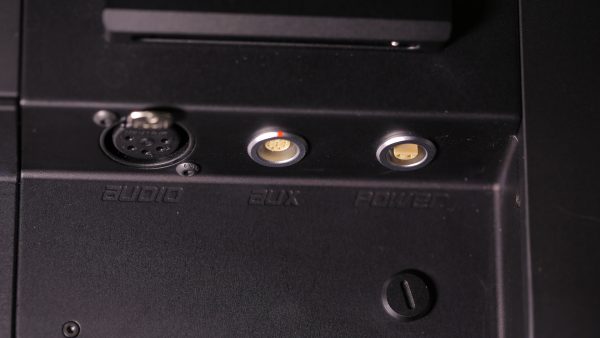 For recording audio, the Magellan uses a 5-pin stereo XLR port on the side of the camera and recordings can be stored either internally in the camera or on external USB 3.0 storage media such as a flash drive or similar. This is all done in an Asahi-Kasai Velvet sound 32bit stereo codec that achieves 121dB of dynamic range. Monitoring audio is done via Bluetooth Classic so that you can sync up your favourite headset to the camera and keep yourself untangled.
This is not the first time Logmar Camera Solutions has made a film camera. Back in 2014, they released the Logmar S-8 (Chatham) camera which was not only the first new Super8 camera in 30 years but was acclaimed as the highest image fidelity camera ever manufactured for the format due to its unique pressure plate and pin registration system. In 2015, Logmar sold some of their 8mm intellectual property to a film manufacturer intending to build their own camera and then used the proceeds from this transaction to create the Magellan 65mm platform. 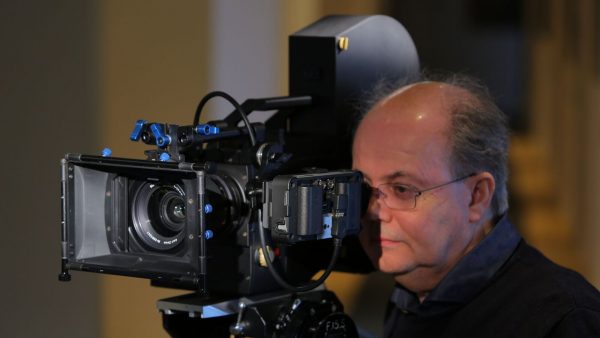 I spoke to Logmar Camera Solutions Chief Executive Officer Tommy Madsen and asked him some questions about the Magellan 65mm:

Q. Why did your company decide to build a 65mm film camera?
Our company has always worked the niches where innovation typically have been stale for a long time and where we as a small company can make a big impact on the market (because it’s niche)

After launching the Chatham 8mm camera in 2015 and selling our IP for this format entirely, we had two choices – either we close shop or move up in the formats.

35mm is well served today with greatly affordable cameras readily available, so for us, we had to make the choice between 16mm or 65mm.

The (now defunct) Swedish company Ikonoskop released a 16mm camera some ten years ago and at that time we were actually working on a 16mm camera (before we even started 8mm) but they beat us to it so we didn’t feel that there would be enough news value in this format at the time.

We also saw that only Panavision and Arriflex had viable cameras in the market today but due to the few available cameras world wide we saw an opportunity to more than double the available market. 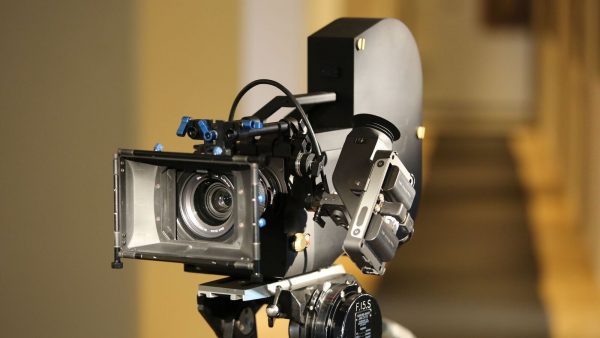 Q. How long has the “Magellan” 65mm camera been in development?
We spent 7 months developing the Magellan camera blueprints and another 14 months to get it manufactured. Out of the 14 month manufacturing time, we lost approx. 6 months due to vendor allocation on electronics and mechanics.

We are now in the “fine-tuning” stage where we are wrapping up the firmware and doing product testing and will most likely remain in this mode for another 4-5 months before the product becomes available. 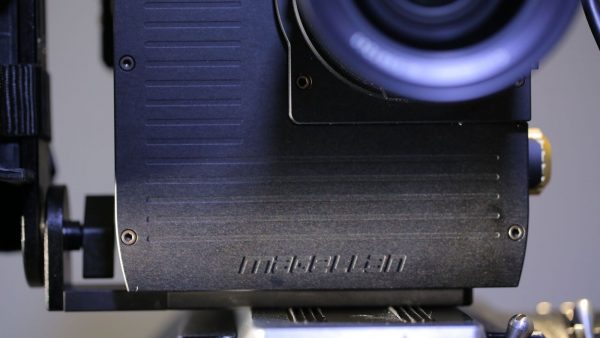 Q. Does the name “Magellan” have any special meaning?
Yes, that’s a sentimental story actually which we have never told – well before now.

My granddaughter is disabled and her favourite thing in life is visiting the Aalborg Zoo and watching the penguins. At the zoo, they have all the different species on display and she’s always enjoyed pointing at and naming them – that has always been “her thing”.

When we started on the S-8 project my son and I were visiting the zoo together with my granddaughter and as we were walking around talking about the project and trying to come up with a working name for it and our company, it was right there in front of us “Chatham”.

The Chatham name was never revealed in public as we used the S-8 name and when we completed the Humboldt 8mm project and transitioned into 65mm we decided to (finally) use our internal names as they were significant for us and hence the Magellan was the first product carrying the project name and the S-8 got its project name added likewise.

The 16mm camera we initially started with (even prior to 8mm) carries the project name of Macaroni and our roadmap for 2019/2020 carries a camera by the name of Emporer and I’ll leave the audience guessing what that could be.

Q. What makes the “Magellan” 65mm camera so special and unique?
The Magellan camera is built to be lightweight and a true “Digicanical” camera meaning we’ve married the best from the film realm with the latest digital features. 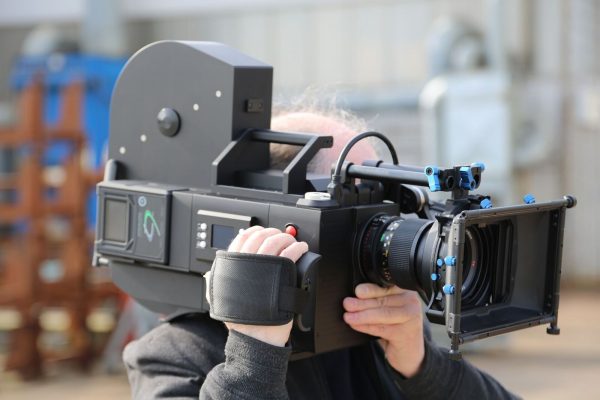 Q. What is so special about shooting on a 65mm or 70mm camera?
I’m my opinion there shouldn’t be any difference between shooting 8, 16, 35 or 65mm as they are all shooting the same film material and will all give you the “film look” – obviously 65mm being the largest and most “majestic” format you get qualities of image that the smaller formats cannot rival when blown up.

When we launched the 8mm Chatham, we were told that it didn’t look like Super8 at all and that we “ruined” the format look as it looked like 16mm. That’s just nonsense as we just made Super8 look the way it was supposed to be.

Q. Most 65mm film cameras are large, heavy and not easy to put on your shoulder. Was this taken into account when designing the “Magellan”?
Yes, that was our primary design goal of the Magellan – to make it shoulder worn. 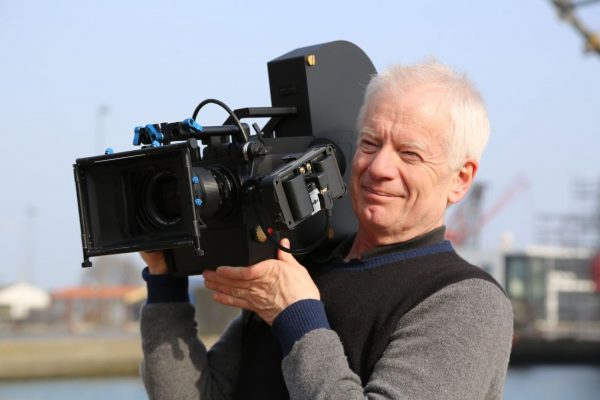 Q. Do you think the “Magellan” is a good combination of the old and the new?
When we released Chatham, many of our customers and spectators complained that the resolution of the viewfinder camera was inadequate and that the feature set was limited. So when we designed Magellan we teamed up with companies like NVIDIA and SONY to utilize their latest and greatest System on chips and image sensor products meaning that we today can offer up to 4K UltraHD resolution and have a top-notch platform running a quad ARM A57 architecture.

Q. In your opinion what makes film so special when compared to digital formats?
It has a depth. The film media is entirely unique, there’s no better way to tell a story than on analogue film. It’s visual strength and dynamic spaciousness hits our emotions like no other media. All film formats have a unique distinct look and feel, but nothing trumps 65mm with its great panoramas and intimate close-ups. 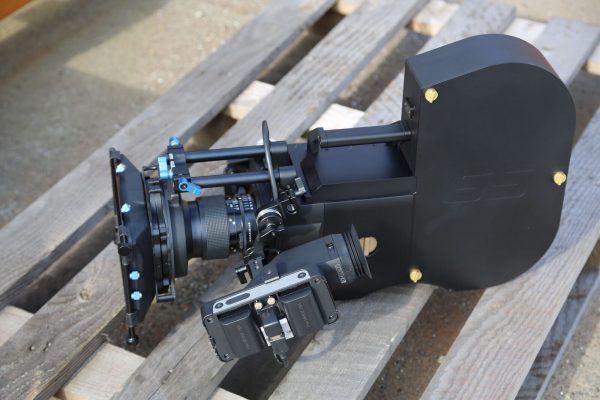 Q. In this modern digital age, do you still think there is a place for film cameras?
Absolutely, in my opinion, the cinema audience is getting used to the “digital look” which they get “showered” with daily and (in my opinion) want something “different” which stands out and film provides this – especially when projected in 70mm.

Q. Who is the “Magellan” aimed at?
The professional DP’s and directors – unlike our previous products this is by no means a consumer device.

Q. Will people be able to purchase this camera or will it be a rental only item?
We haven’t decided on our business model for the Magellan yet. 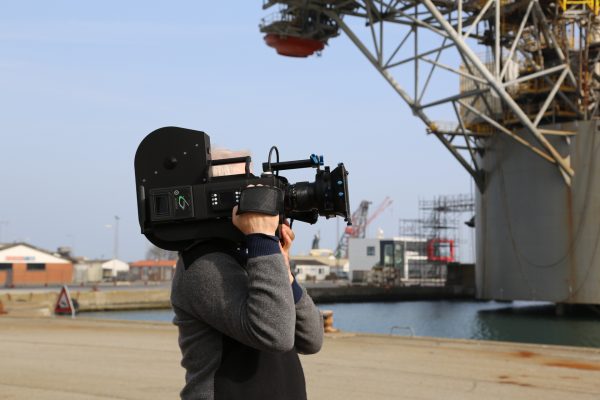 Shooting on film is certainly not for everyone and the processing costs alone are likely to scare away most productions that don’t have very deep pockets. It’s great to see old technology being combined with new technology in an attempt to keep a dying art form alive. While we are unlikely to ever see a boom in shooting on film again, companies like Logmar Camera Solutions should be applauded for not following everyone else down the digital path.

Cinematographers such as Bob Richardson, Christopher Nolan and Hoyte van Hoytema have all used 65mm/70mm film cameras to create some truly impressive results, but with the ALEXA 65 and the arrival of other full frame and Vista Vision cameras, you have to wonder how much longer studios will be willing to foot the bill.

What do you think of the Magellan 65mm? Are the days of shooting on film numbered? Let us know in the comments section below?