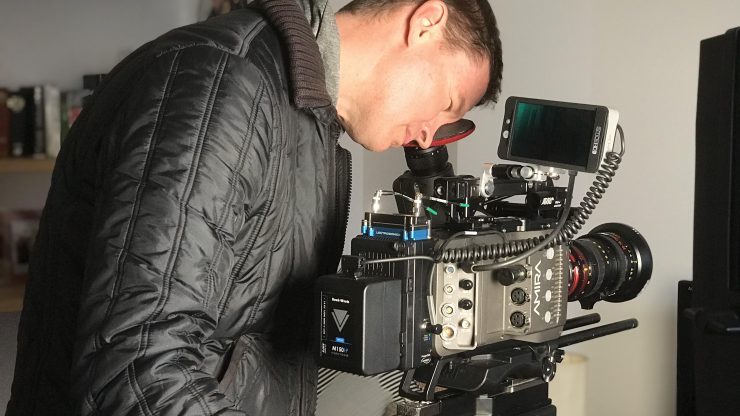 Are the Hawk-Woods Mini V-Lok batteries the ultimate battery solution for the travelling cameraman? Well, let’s find out. The batteries were first shown at IBC last year, and the company claims that they are the smallest V-Lock batteries in the world.

No matter what camera, lights, monitor or just about any other accessory you use, they all require power. Some require less than others, but if you spend a lot of time travelling then you will be well aware of just how stringent the airline regulations are when it comes to lithium-ion batteries. A lot of airlines allow you to carry a substantial amount of batteries as long as they are under 100Wh. If you have batteries that are between 100-160Wh, then you are usually allowed to only carry two spares batteries per person.

If you have a camera or use accessories that run off V-Lock batteries then you may well find yourself having to hand carry a lot of them onboard a plane. This, of course, means extra weight and can limit how much else you can pack in your carry on bag. If you have a lot of batteries, that weight can quickly add up.

When I’m travelling on planes I always have a bag of batteries that are not only heavy but also large in size. This physical size also means that I’m often getting stopped by security so they can check the batteries. Even though the batteries I take are under the 160Wh limit, their large size inevitably leads to questions and security staff wanting to double check that they actually are safe to carry on a plane. Just last week I found myself arguing with security staff for more than 45 minutes and almost missed my flight for this very reason. 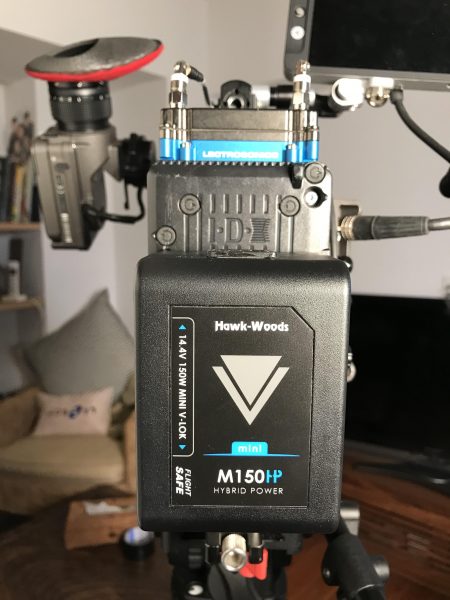 I love using high capacity batteries, but their physical size and weight when travelling is a real drawback. For travelling, I want a more compact and easy to transport solution, without sacrificing the power capacity. The saying bigger is always better certainly isn’t the case when it comes to travelling with batteries. 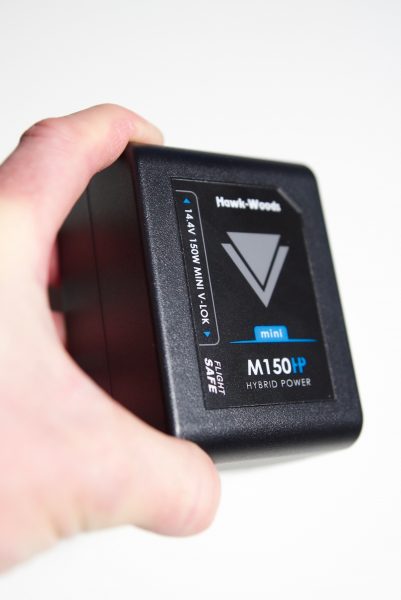 When I saw the Hawk-Woods Mini V-Lock batteries at IBC 2017, they immediately garnered my interest. I had to look twice to check that my eyes weren’t deceiving me. The first battery I saw said 150Wh, but it was half the size and 25-40% lighter than most comparable V-lock batteries. Surely there must be some sort of catch. Is the voltage capacity lower? No. Does it take longer to charge? No. Is the max. power draw low? No. 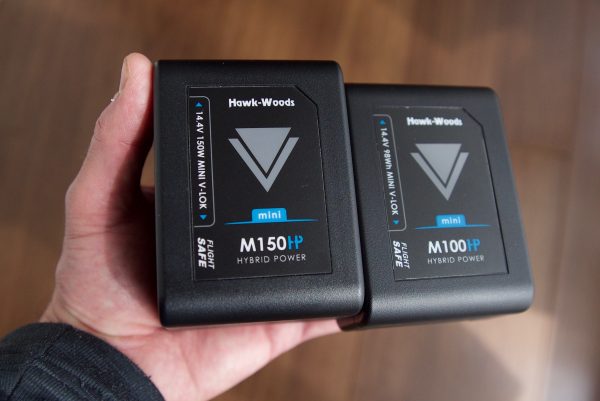 The Hawk-Woods Mini V-Lock batteries now come in three capacities with the new 50Wh VL-M50 becoming available this week joining the 98Wh VL-M98, and the 150Wh VL-M150. While they don’t come in Gold Mount, Hawk-Woods does sell a Gold Mount to Dual Mini V-Lok plate (AB-MCF1). 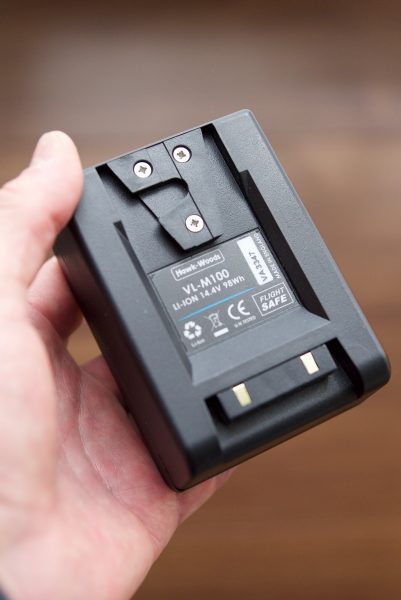 The VL-M98 has a 10A (Max) power draw and can output 14.4V. The VL-M98 also has a LED voltage indicator, but no D-Tap power output (See note below regarding D-Tap outlets). It weighs 490g (0.9lb), with physical dimensions of 10cm x 7cm x 4.5cm. To put that size and weight into perspective here is what some other similar capacity batteries weigh and their physical dimensions:

The only real downside the Hawk-Woods VL-M98 has when comparing it against some of the competition is the fact that it doesn’t have a D-Tap power outlet. Since receiving the batteries, Hawk-Woods has made progress and is currently modifying the VL-M98 to have a single D-Tap outlet. The outlet will on the bottom but it’s better than having none.

The nearest in size is the new Granite Mini batteries from Blueshape which offer two D-Tap outlets but is almost double the weight at 870g.

The VL-M150 has a 10A (Max) power draw and can output 14.4V. The battery has an LED voltage indicator as well as a D-Tap power outlet. For a 150Wh capacity battery, it weighs a ridiculously low 607g (1.33lb) and has physical dimensions of just 10cm x 7cm x 6.3cm. To put that size and weight into perspective here is what some other 150Wh capacity batteries weigh and their physical dimensions: 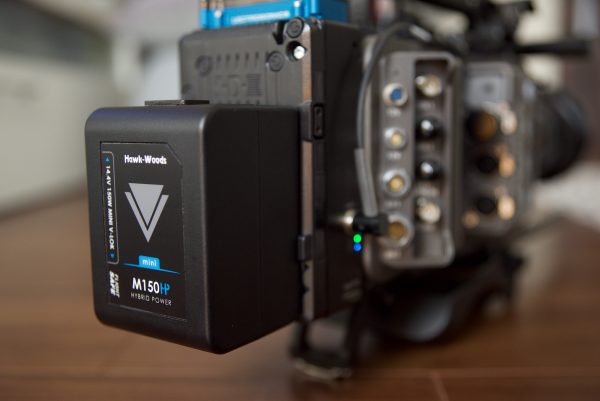 The Hawk-Woods VL-M150 is smaller and lighter than any other competing product offering a 150Wh capacity battery. I tested out the VL-M150 on my ARRI Amira and found that I could get continuous run times of around 1 hour and 50 minutes If I wasn’t powering any accessories. 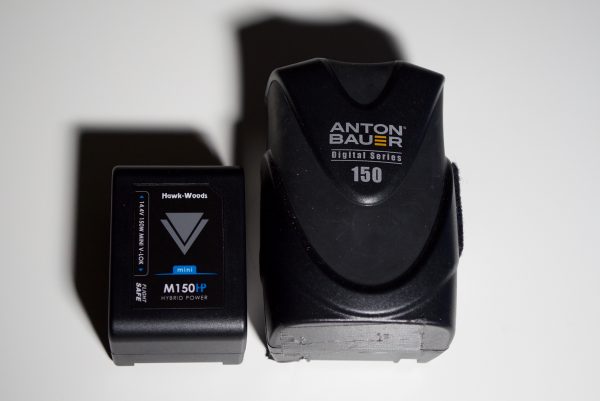 Both the VL-M150 and VL-M98 will operate in temperatures ranging from -20c to 50c. Hawk-Woods recommends that the batteries be charged using their VL-2X2C or VL-ATM4 chargers, but I did find that they charged up perfectly fine on battery chargers from Sony, IDX, and Anton Bauer. Since writing this review, Hawk-Woods has released the smaller VL-MX1 single channel 3A fast charger designed for the mini batteries. 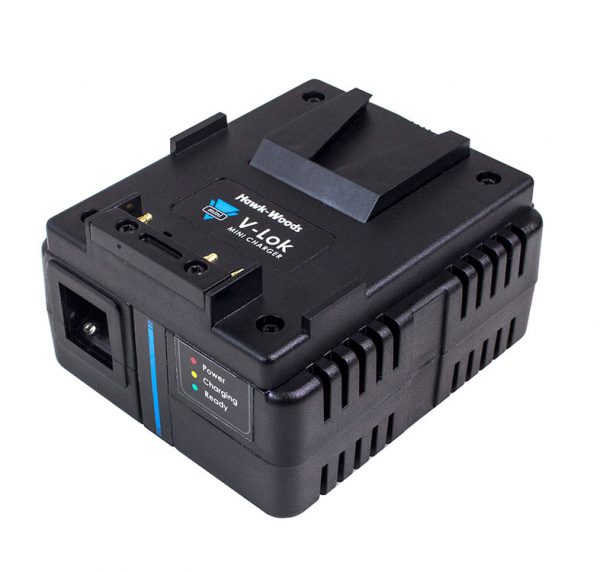 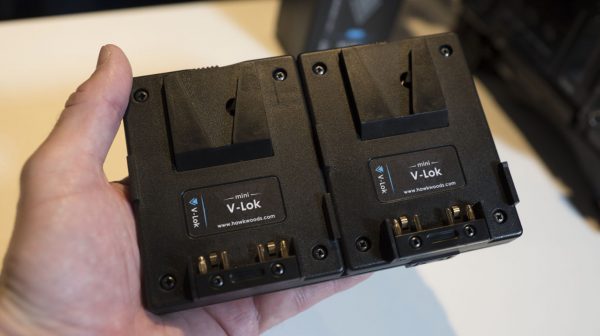 Hawk-Woods makes a dual V-Lok camera plate for the mini V-Lok batteries called the VL-MCF1 ($344 USD). This plate allows you to mount two Hawk-Woods Mini V-Lok batteries in whichever combination you like (e.g. two VL-M150 or one VL-M150 & 1 VL-M98). This setup for the mini batteries is similar to the stack-able battery systems currently available on the market for continuous power to your equipment, however, differs in the advantage that you do not need to carry around dead weight, your batteries are technically always working.

What I love about this plate is that you can attach two VL-M150 batteries for a 300Wh total all in a setup that weighs not that much more than a lot of conventional 150Wh batteries. This is great if you are running high power draw cameras such as ARRI cameras and don’t want to have to change batteries every hour.

This adapter has been fitted with an intelligent LED system to determine battery status against the total amount of current being drawn, so you know exactly when your battery needs to be changed. The LED will come on and flash at 12.7v and under meaning that your battery will soon need to be changed. The plate also comes equipped and fitted with 2x Power-con (D-Tap) outputs.

One of the great things about the dual V-Lok plate is that you can put two batteries on it and then attach it directly to any V-Lock charger and charge both those batteries at the same time. This is great for travelling cameraman because if for example, you had two of the dual plates you could turn a two-channel charger into a four-channel charger.

If you happen to use or own a RED, then Hawk-Woods has the VL-MCF2 dual battery plate available.

Plates for your Atomos Shogun and Convergent Design Odyssey

Hawk-Woods also makes a couple of nice power plates that have been designed to work with their Mini V-Lok batteries for use on the Atomos Shogun and Convergent Design Odyssey monitor/recorders. 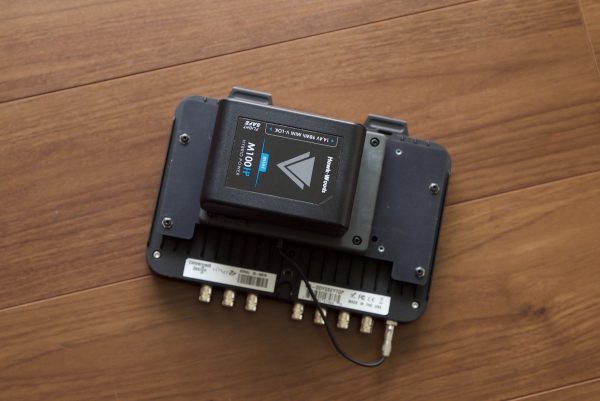 The VLM-7Q fitting plate mounts directly to the rear of an Odyssey monitor, this can be used with the 7Q or 7Q+. Fitting screws are provided with the product. The plate features 2x power-con outputs for powering further accessories, the power-con outputs are all nominal battery voltage, which can be 16.8v when fully charged. There is a fixed flying lead to the monitor’s DC input. 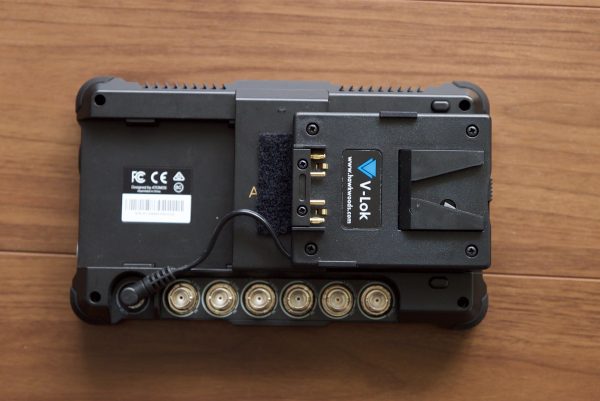 The VLM-AS1 adapter is designed to work with the Shogun/Ninja – Inferno/Flame range of monitors, this adapter mounts to the rear of the monitor allowing the use of V-Lok batteries. A fixed flying lead will provide power to the monitor DC input.

Using the Mini V-Lok battery system will keep weight to a minimum, but still provide plenty of power to the monitor allowing you to run for a longer time with fewer battery changes. This is a massive improvement from running off the Sony NPF batteries. The 50Wh ML-V50 is ideal for powering monitors as it only weighs under 300g. 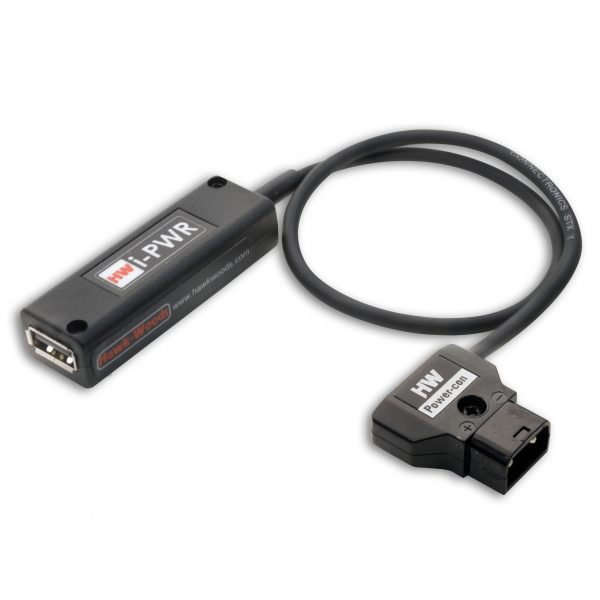 In addition to the plates, Hawk-Woods also make a nice 5V regulated Power-Con to USB iPhone/iPad Charge Adaptor called the i-PW1 ($92 USD) that you can attach to your camera batteries and keep your smartphones and tablets charged up. 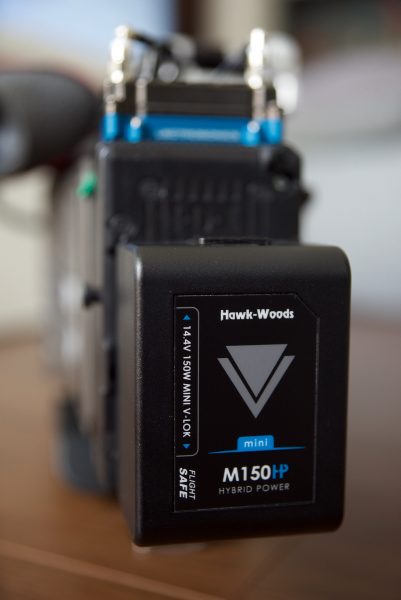 These prices are reasonable compared to the competition:

Both the VL-M150 and VL-M98 are perfect for powering cameras and accessories, especially if you are a shooter who travels a lot. Their small size and weight make not only a huge difference when you are travelling, but it also comes in very handy for powering LED lights, monitors, external recorders or just about any other accessory.

If you are using a smaller camera such as a C300 Mark II or a Panasonic EVA-1, the VL-M98 with an adapter plate makes a lot of sense if you need an extremely long, uninterrupted power supply. 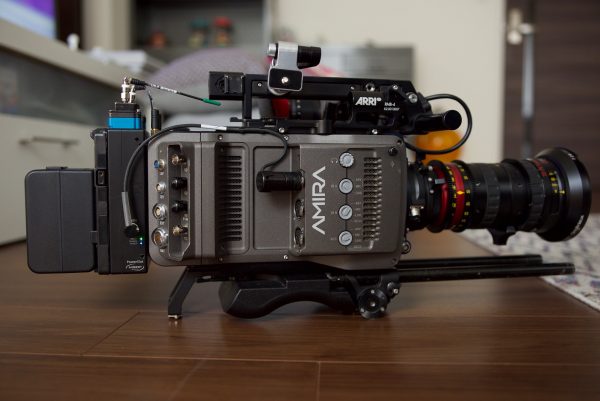 For a travelling cameraman or camerawoman who needs to use V-Lok batteries, there simply isn’t a lighter and smaller solution available. Once you have used the Mini V-Lok batteries it’s hard to go back to anything else. The batteries aren’t for everyone, and certain shooters will want to use a larger battery for better counterbalancing of their camera, or for powering a lot of accessories, but in saying that, you could always use the dual plate and run two of the Mini-V-Lok batteries to achieve the same result. 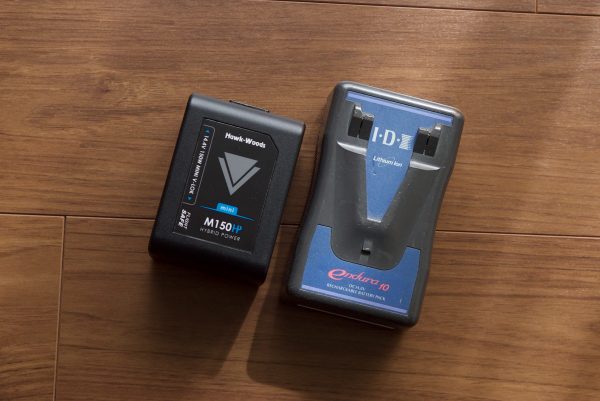 Batteries from all the leading manufacturers such as IDX, Anton Bauer, CORE SWX, and PAG all offer great performance, but none of them are as small or as lightweight as the Hawk-Woods. Whether the Mini V-Lok batteries offer as good as performance or longevity as some of these other brands is hard to know without having the benefit of using them over a large span of time.

The Hawk-Woods Mini V-Lok batteries come highly recommended. While we normally like to brag that bigger is better, in the case of batteries, the opposite is true.