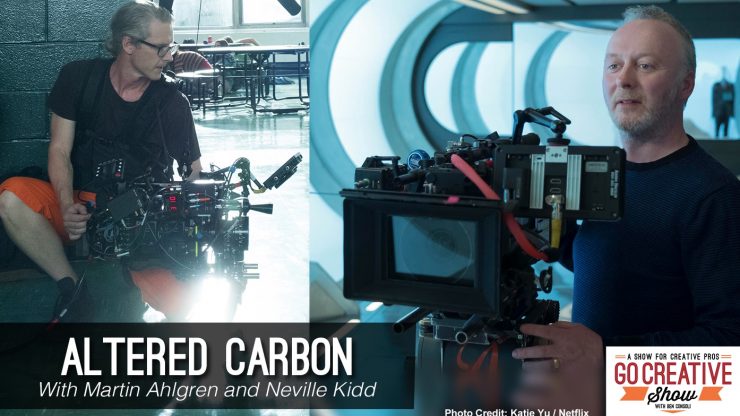 On this weeks Go Creative Show podcast, host Ben Concoli talks to Martin Ahlgren and Neville Kidd, who were both Directors of Photography on the Netflix hit show Altered Carbon.

Altered Carbon, is a dystopian, cyberpunk action/sci-fi tale, set centuries into a bleak future, and takes place partly in other solar systems. It is a ten-episode television series based on the Richard Morgan novel.

The show was shot on the ARRI ALEXA 65 camera in 5K mode, making it one of the first television series to follow this path. 5K was a middle ground when it came to the amount of data, but it also offered compatibility with a wider array of lenses compared to 6.5K, which is slightly bigger than a VistaVision frame and requires large-format glass that will cover the greater area.

You can listen to the full podcast above

Topics covered include:
The cinematography of Altered Carbon
The collaborative workflow between Martin and Neville
What was the visual inspiration for Altered Carbon’s iconic look
Planning for the future of lighting
Shooting on 360 degree sets
Why the futuristic look of Altered Carbon nods to the past
Mixing Canon and Cooke lenses
Data management
Shooting stunt and fight sequences