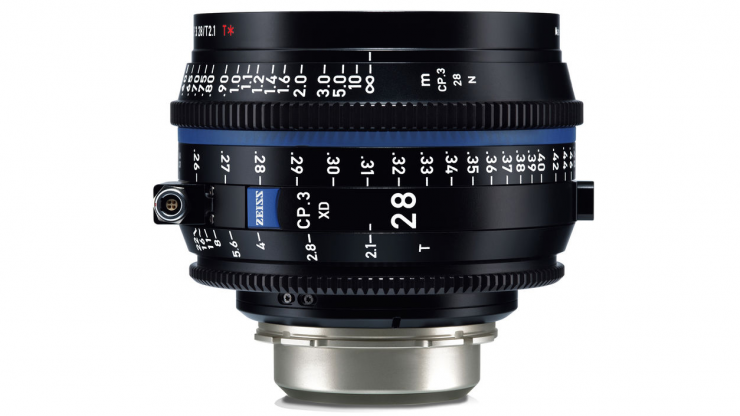 Zeiss launched their new CP.3 range of lenses at NAB earlier this year as a replacement for their very popular CP.2 line. Unusually, the replacements come in two variants: regular CP.3s and the CP.3 XD range. You can check out our report on the CP.3’s launch from NAB 2017 here. 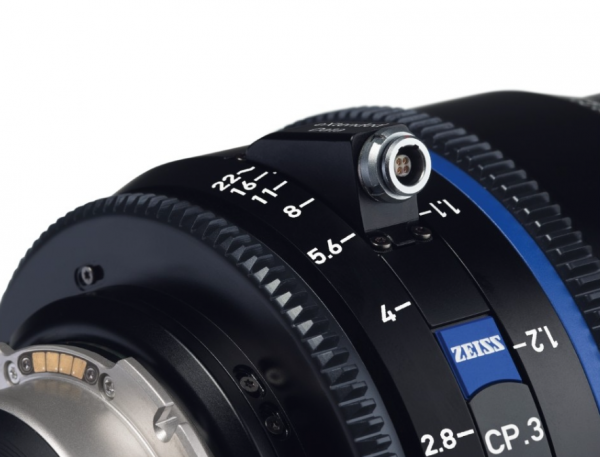 Optically they’re the same but the XD lenses feature an additional port with electronic contacts to transfer lens metadata – ‘eXtended Data’ in Zeiss-speak – this will allow you to correct for lens shading and distortion in post production without having to shoot charts and tests beforehand.

CP.2s have proved popular since their introduction in 2009, and Zeiss have sold over 30,000 of them. Eight years on and the CP.3s are touted as offering better control of flare by using new lens coatings, painted lens rims and special light traps within the barrel to enable higher contrast, richer blacks and more saturated colors. This they say allows for shooting in High Dynamic Range (HDR) with the ability to maintain deep shadows and bright highlights in the same scene. Across the range aberrations have been improved, housings made smaller, and weight reduced. More consistent T-stops have also been adopted. 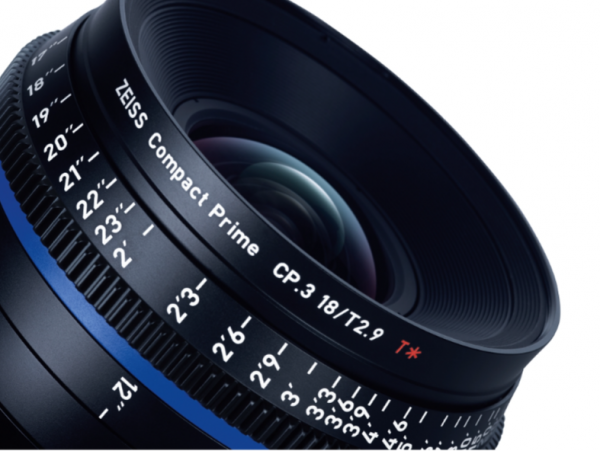 This is intended to make them closer in performance to the Zeiss Ultra series of lenses but at a much more affordable price. New lens coatings are intended to help colour matching across the whole range of Zeiss lenses, and not just with other CP.3s. Zeiss have also continued with the interchangeable mount system and the CP3’s are available in EF, PL, E, MFT and F mount. 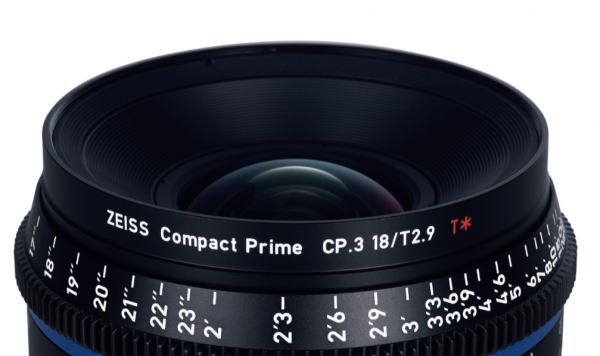 Focus rings have been taken from the Master Prime range, with a rotation of around 300° and a smoother action than the CP2.s which could sometimes become a little sticky, not least when ambient temperatures warmed up or cooled down. This new smoother action also means that if you are using lens motors for focus you will be able to use a smaller, lighter unit.

So how does the XD system work? Newshooter were invited along to a workshop at Pinewood Studios, in the UK to find out.

The CP.3 XD models feature an expanded implementation of Cooke’s / i /technology to map lens data for every frame you shoot. On top of the Cooke system, Zeiss have added frame-accurate data about the lens’ distortion and shading profile, made possible because in each CP.3 XD lens there is a chip, which is calibrated with the specific characteristics of the lens in the factory. This data is frame accurate and precise to 1mm of focus and 1/10 T stop

The extended data comes in two sets of information:

This gives you very comprehensive information about each frame recorded. 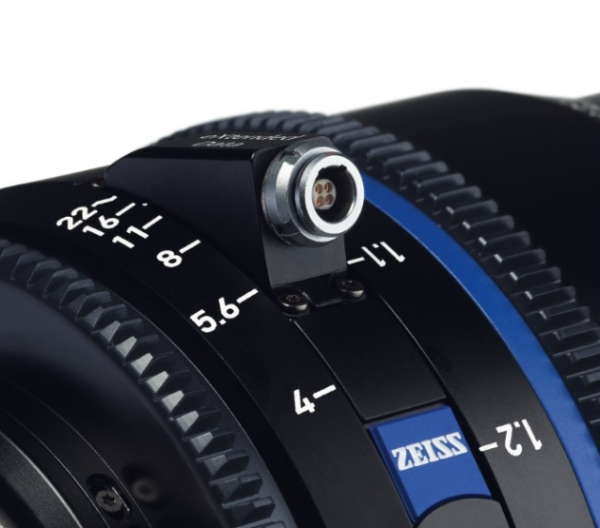 The lens data is outputed via a Lemo socket on the lens body and can be recorded via an SD card to an external Ambient Master Lockit box attached to the camera. 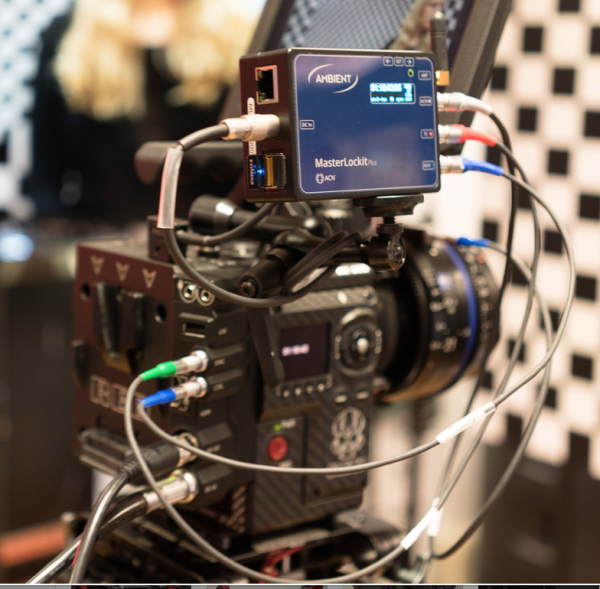 The Master Lockit also needs to be connected to a power and timecode source from the camera. The lens data from each video frame is recorded and synced to the recorded image using timecode. 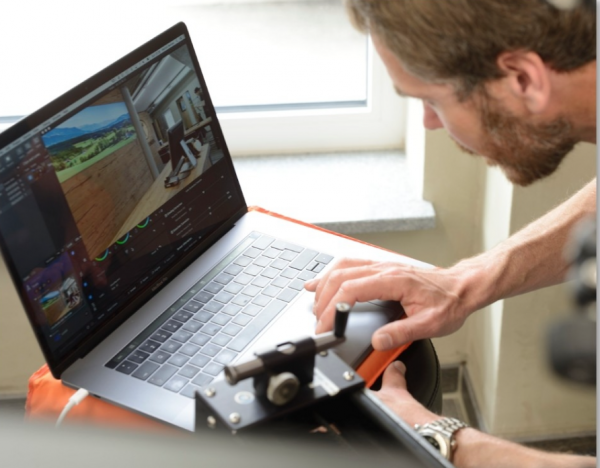 However, offloading the data from the lockit is far from ideal at the moment as the SD card has to be downloaded separately from the footage and the files need to be kept together for post.

Zeiss are currently working with camera manufacturers to allow the XD metadata to be recorded internally to the camera media via the PL-mount four pin interface – the same pathway as the Cook / i is currently recorded. 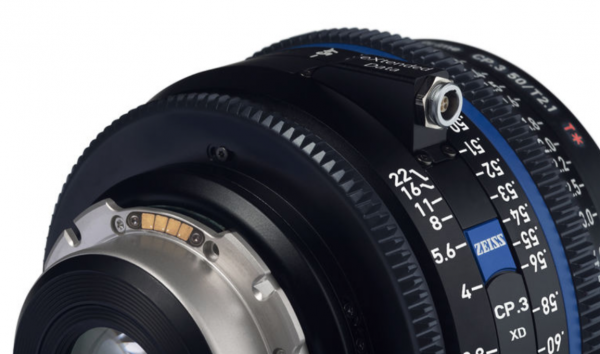 What is also interesting is that because the XD lens is already calibrated in the factory, if you’re using a follow focus such as a Preston, Cmotion or Arri WCU4 there is no need to calibrate on set, as the lens data is automatically detected – this will make lens changes much quicker.

So what does this data allow us to do? 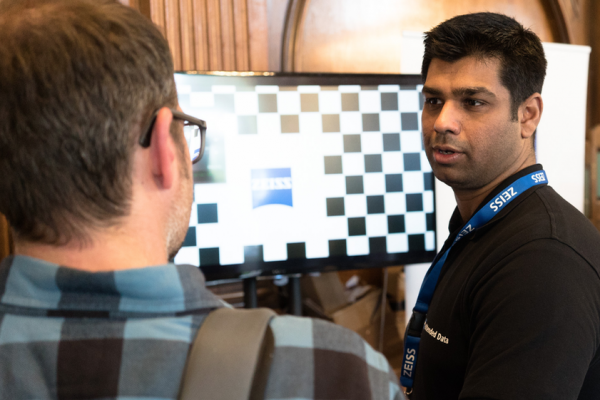 If you’ve used Lightroom for stills you’ll know there’s a useful option with a lot of lenses that have been profiled by Adobe: click a button and you can correct for distortion and lens shading. That’s made possible by the metadata embedded in stills files and the lens profiles built into the software.

The XD system acts in a similar way for video, allowing you to correct for distortion and shading on a per frame basis in post. You can also use the system in a more creative way, adding more distortion to achieve a particular effect or dialling in shading to match a desired look.

The system is currently accessible via a plugin for Blackmagic Design’s DaVinci Resolve and it’s as simple as adding a node to your clip and selecting the relevant metadata sidecar file. Providing it’s made it to post alongside your footage, the demo we saw seemed fairly fool proof. Compatibility with other grading and editing platforms will follow.

You can also use this data onset with Silverstack or with Pomfort Live Grade pro where you can adjust the lens characteristics live on set via Wi-Fi. 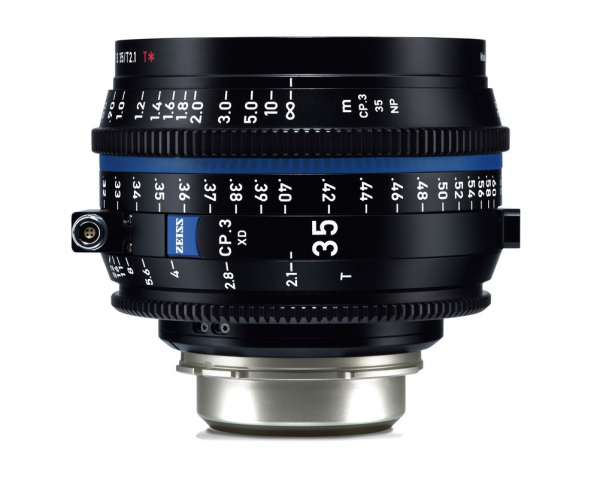 The lens data is particularly useful in the VFX world where control over distortion and shading is critical for being able to composite in additional elements. Until now you’ve had to spend time shooting charts with all the lenses used by a production or even going frame by frame and judging things manually. For lower budget productions, Zeiss hope that the XD system will allow the automation of a lot of groundwork, opening up the possibility of more ambitious VFX work for tighter budgets or quicker turnarounds.

Zeiss suggest that the data will be useful for other departments on set too:

Data Wrangler / Digital Imaging Technician
Classification and search functions for specific shots (e.g. correct lens settings for a re-shoot)
Automatic options for quality check procedure (e.g. pre-selection of critical shots for visual check in real-time)
Statistical analysis of lenses used in the production and the lens’ settings. Lens settings can be viewed at a glance on a monitor for continuity log sheets or transferred wirelessly to supported device apps

Director of Photography
Lens settings at a glance on monitor or viewfinder. Defining the final look by previsualizing color grading, shading and distortion and transferring it to post-production.

Dailies
Quick supply of dailies due to automated image pre-correction and faster sorting options. Lens settings can be viewed at a glance on a monitor for continuity log sheets or transferred wirelessly to supported device apps       .

Visual Effects
Removing or adding distortion for stitching and CGI integration
Removing or adding shading while matching shots. Key lens data for Match Moving, calculation of defocus and bokeh with CGI integration, stitching, manipulation of motion blur. Lens settings can be viewed at a glance on a monitor for continuity log sheets or transferred wirelessly to supported device apps        .

Virtual Reality Productions
Stitching and matching of multiple images. Lens settings can be viewed at a glance on a monitor for continuity log sheets or transferred wirelessly to supported device apps       .

Augmented Reality Productions
Corrections for CGI integration. Lens settings can be viewed at a glance on a monitor for continuity log sheets or transferred wirelessly to supported device apps        .

All this is great, but as an owner/operator do you need a CP.3 XD version? 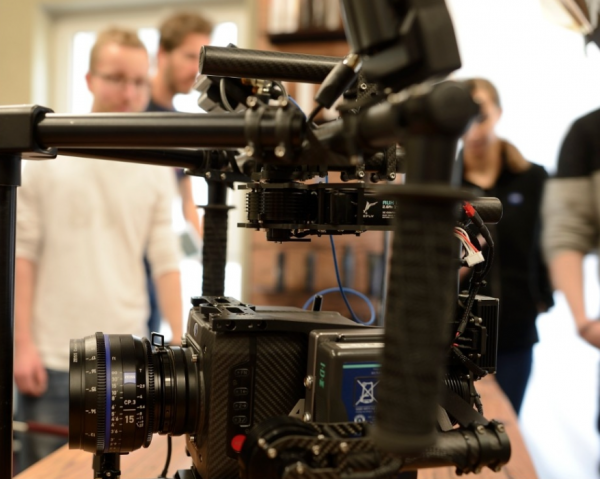 But for the owner / operators who bought CP.2s, who work primarily in the factual arena rather than VFX, and want to upgrade to the CP3s, is it worth spending the extra money for the CP.3 XD version rather than the standard CP3? There is a difference in price of around £1,300 ($1725US) per lens between the two versions.

Well over the past few years factual shooters have adopted many techniques and equipment that was until recently only found in high-end cinema production. This has included large sensor cameras, shooting in Log, and LUTs. Lens data feels like the next step.

This is new tech in its infancy and now that i /Technology is being licensed by Cooke to third parties it’s probably here to stay. As more post platforms and camera manufacturers come on board it could become the norm. I feel it’s likely other lens manufactures will roll out their own versions of tech like XD in the near future. 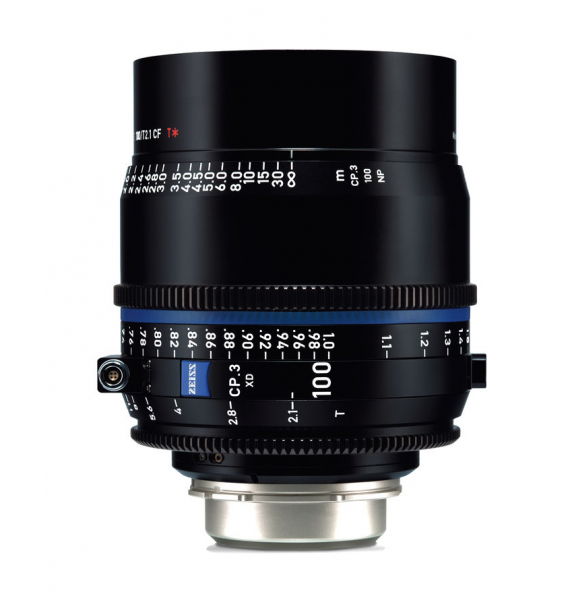 This data will be useful if shooting buildings or specifically architecture, trying to capture exteriors and interiors of large buildings on wide lenses can be challenging. Using this data may help to correct the cursed bowing wall! It will also handy when working in tight locations where objects and talent are closer to camera than you would really like. Or when shooting bright skies or in snowy conditions where shading on the edges of the frame are more noticeable. Or you could add more shading to the edges of the lens to draw the viewer’s eye towards the centre of the image.

Most aberrations and shading become more apparent as the lens is opened up so of course there is also the option of stopping down to help correct this. But if you do tend shoot more towards wide open, then the XD data will be very useful.

If you want to own one set of lenses, you work on a wide range of productions, you use a range of cameras from Full Frame to S35, need interchangeable mounts, work with limited budgets but want high-quality images, use gimbals or drones, and like the look of the CP.3 images, and want to future-proof your investment and can afford it, then the CP3 XDs might be the lenses for you.

And this is only the start of what Zeiss hope to do with the XD system. They are talking about enabling more features via firmware updates and when the metadata is transferred over the lens pins there won’t be the need for an extra box to record it.

There was some speculation at the workshop as to whether it might be possible to load different ‘look’ profiles for the XD lenses in post to recreate the characteristics of other glass while still using the CP.3s. That’s not a reality right now, but it seems likely that in the future XD technology or something like it will allow you a lot more flexibility in post. Just make sure to keep the firmware on your lenses up to date.

Simon has worked extensively in TV for the past 20 years, shooting a wide range of award-winning network programmes. Credits include Grand Designs, Bang Goes the Theory, Crimewatch, Hairy Bikers, The Culture Show and Countryfile.