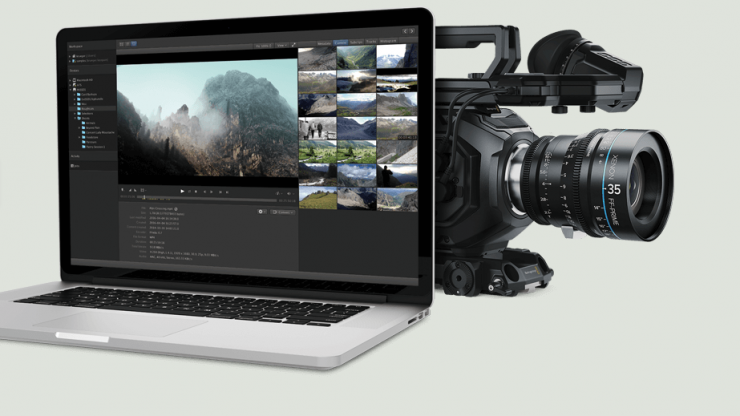 Kyno, one of the most popular all-in-one media management apps has just been improved with the release of version 1.3. The new update contains a wide range of improvements, which have been based directly from customer feedback and requests.

I’m a big fan of Kyno and have been using it ever since it was first shown to me at NAB 2016. Kyno is not only a very useful media management tool but it also allows reporters/producers and anyone who may not have a non linear editing program on their computer to easily view and log content.

Don’t fix it if it ain’t broken 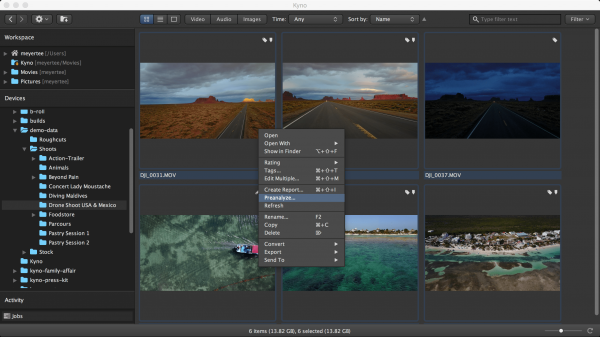 Rather than making drastic changes to an already good product, version 1.3 focusses on tweaking productivity and adds a ton of new keyboard shortcuts, among them the ability to send directly to FCPX or Adobe Premiere Pro. There are also one click options for exporting to Excel, toggling drilldown, converting clips with the most recently used preset, the ability to switch keyboard focus between different detail view areas, set ratings, and zooming in/out. 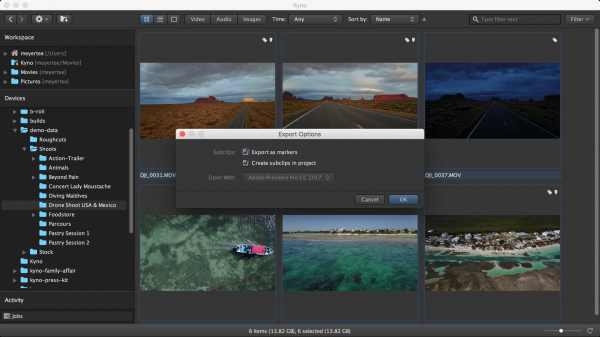 Integration with Premiere Pro has become much more flexible as it now gives you the option to use subclips you create in Kyno as markers in Premiere, in addition to the option of using them as Premiere subclips. There is also improved round tripping when re-importing XML. 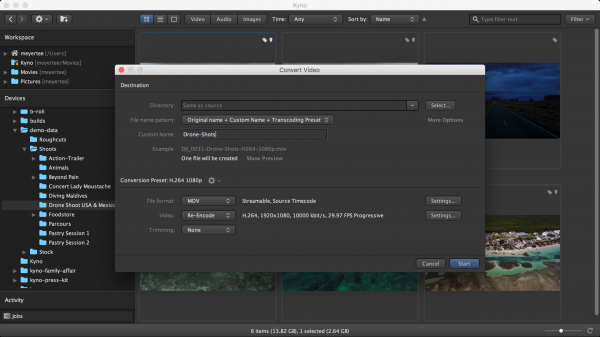 Selecting the most recently used conversion presets is now much faster, and Kyno’s naming engine has lots of new metadata variables for experts to use as well as an improved UI. Batch tagging has also become more efficient and the Excel export more flexible (you can now select to only export subclips, so building shot lists can be done in parallel to marking frames for still export). 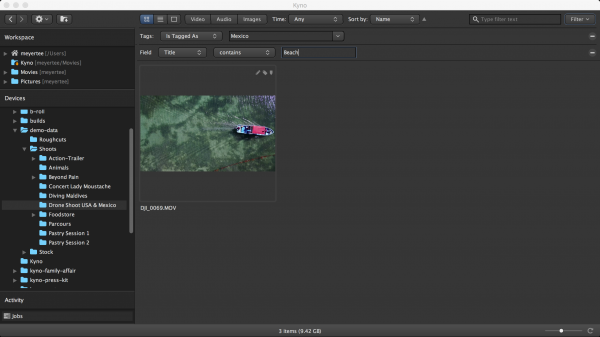 New filters have been added so you can now filter your material based on scene, shot, take and more descriptive metadata fields. The subclip export has been improved further, so the exported subclips inherit all the descriptive metadata they had within their original clip, which makes popular team workflows, that are based on pre-edit material preselection, even more efficient.

Apart from this there have been numerous little usability and productivity improvements as well as a number of improvements in the areas of speed and stability and some bug fixes. 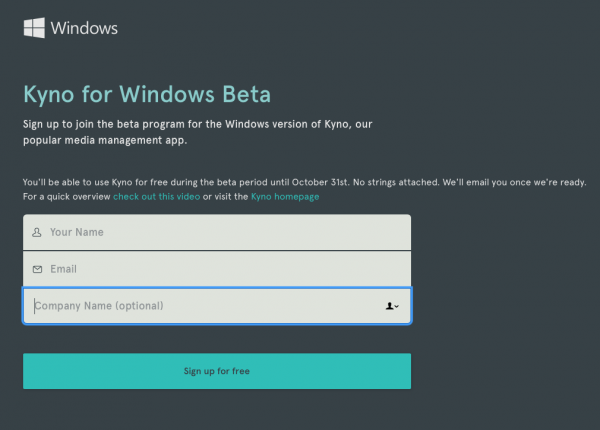 The Windows version is coming along nicely and Kyno is announcing a beta registration program that you can find at kyno.software/kyno-for-windows-beta if you want to be a tester.

Kyno usually retails for $159US, but they are having a summer promotion for the next two weeks where you can save 25%.

General improvements:
Added filter options for all descriptive metadata fields like Title, Description, Scene etc. See: Filter – Descriptive – Other fields
The tag filter has become more powerful as it now allows you to filter items that don’t have a certain tag and we’ve added autocomplete support for the tag selector
The dialogs for renaming and transcoding of single files are now the same as for batch operations, giving you the full power of naming presets and variables for single files
For extra fine control over file naming, we’ve added separate placeholders for day, month, year, time, hour, minute, second for all date variables (modified, created, current)
We’ve improved the metadata in clips resulting from a subclip export: the subclip title is now set as main title, and in/out are set if handles were added
The player now sports a 1.5x playback speed option
We’ve added the option to produce subclip-only Excel exports

Usability improvements:
Faster access to transcoding presets: we’ve moved the recently used transcoding presets to the top level of the transcoding menus
The most recently used transcoding preset can be used on the current selection by pressing Cmd-E
The keyboard focus is now kept on the last used metadata input field when switching through clips
Rejoice, there’s now a keyboard shortcut available for Drilldown mode: Cmd-Shift-D
When naming files (rename & transcode) the UI now remembers values, like “Custom Name” or “Number of Digits”, that were already specified across multiple operations
In the tagging UI you can now apply tags that are already set on some items to all items
Keyboard powerusers can now set focus on the metadata input fields by pressing Cmd-Alt-M, then move on to the next clip by pressing Cmd-Alt-Right (thanks Simeon!). There are more options in View – Select View and the keyboard shortcut list below
As it was slightly confusing not so see some naming presets in the transcoding dialog that are visible in the “Manage Presets” dialog, we’ve made most of them available independent of the context (i.e. whether transcoding, renaming, exporting subclips)
The reject icon in detail mode is now red when active

Performance improvements:
We significantly improved performance when slow drives or network drives are connected
Have you already discovered the preanalyze function to speed up screening and logging? It now includes the option to generate content tab thumbnails in advance, too
Cached data (thumbnails, technical metadata) now remains intact when moving files around within Kyno
Setting tags or rating in list/thumbnail view doesn’t trigger regeneration of thumbnails anymore

Fixes:
We hunted down a bug that caused performance issues when quickly switching through clips in the detail view
Images were sometimes rendered too small with line-artefacts which should now be fixed
Fixed a problem that caused drilldown not to be activated automatically when connecting an SD card from a camera
Eliminated a bug that caused the jobs-list to be broken after hitting “Remove Finished”
Fixed playback problems of TS files with a rare layout of audio streams (0 channels in audio stream)
File timestamps were sometimes not set correctly when copying or transcoding, now they should always be set as intended
Fixed a rare problem that wouldn’t let the transcoding start by clicking the “Start” button
Full screen controls were buggy sometimes, especially when navigating to the next clip
Fixed an issue that made transcoding of M4V/MOV files fail when they contained two video streams, common for some clips created with FCPX
Fixed a rare application crash that occured during transcoding
Subclips with identical names no longer overwrite each other when exported to Premiere Pro
The Delete key wasn’t doing what it’s meant to, now it does indeed delete the selected item(s)
Up/Down Arrow key sets cursor correctly to the beginning and end of the text field