New Aladdin flexible LED light strips and a ton of new accessories were being shown at NAB 2017. Aladdin who are best know for their flexible LED lights were showing a clever low power strip lights that are perfect for positioning in places where you need to replicate a small practice source.

The strips have velcro on the back of them which makes it easy to fasten them to just about any surface. There is currently no indication on pricing or availability.

As well as the hard backing plate they were also showing a solid metal frame for the Bi-Flex 1×1. The solid frame has magnetic corners so the light sits on very easily and it also can take a solid front diffusion panel to help protect the light. The frame can break down into pieces so it is easy to travel with.

Aladdin have also redesigned their dimmer/power supply boxes for their Bi-Flex 2×1 and 4×1 lights to be a bit more streamlines and to incorporate a small digital display and built in wireless DMX receiver. 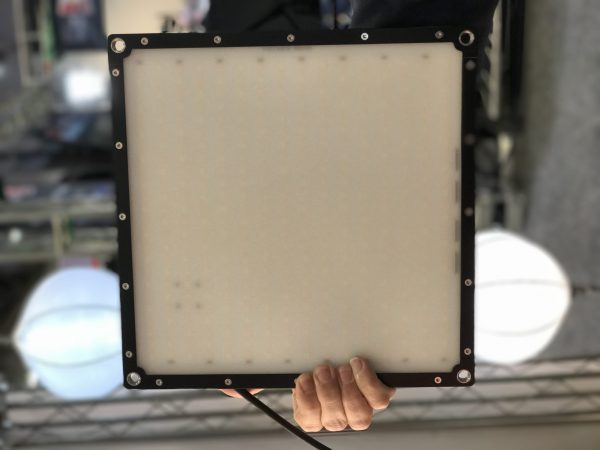 The company also had a single version of their hard cased 1×1 Flex light that we have previously seen in double and quad configurations. According to Aladdin the hard backed flex 1×1 panels are now available to purchase but i haven’t been able to find out from where or how much they are.

Finally Aladdin were showing a new DMX control box that had the ability to be able to be run off a DC power source which is very handy if you want to create a large lighting source out on location in the field.