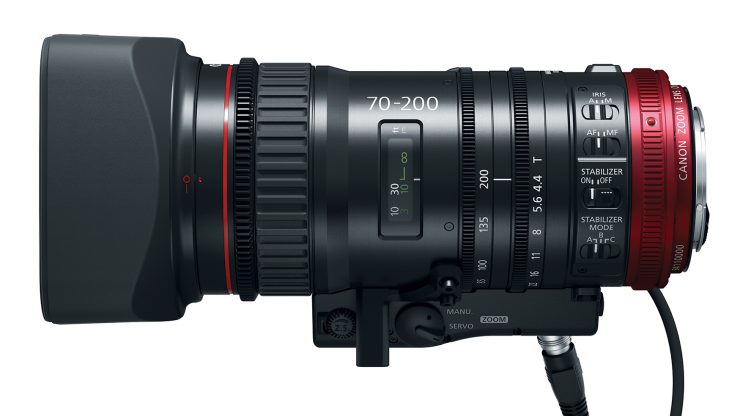 In a direct response to the ever-increasing demand for more affordable servo zoom lenses Canon has announced the CN-E 70-200mm T4.4 L IS KAS S. The new 70-200mm lens is compact and lightweight and shares a lot of similarities with its sister lens the CN-E Canon CN-E 18-80mm T4.4.

Not only does the CN-E 70-200mm share the exact same constant T4.4 aperture as the CN-E 18-80mm, but it is also the same weight (2.65 lb/1.2kg)) and physical size. This is a good move from Canon to offer shooters two lenses that cover a pretty comprehensive focal range (apart from super wide) while keeping both lenses the same physical size and weight. Some shooters may be disappointed that this lens doesn’t feature a faster constant T3.1  (f2.8) aperture, but if it did, the physical size and weight of the lens would probably have doubled.

Just like the 18-80mm T4.4, the 70-200mm T4.4 has been designed by Canon to bridge the gap between traditional Canon EF lenses and their high end CN-E cinema lenses. For documentary and run and gun shooters owning both these lenses makes a lot of sense. In a lot of ways these focal lengths are a lot more usable than those of the Fujinon MK 18-55mm T2.9 and 50-135mm T2.9, but at the expense of having a slower aperture. 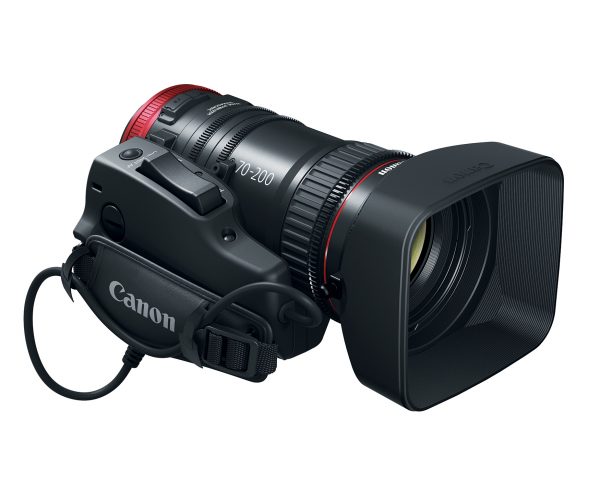 The compact servo 70-200mm Telephoto Zoom Lens includes a servo drive unit as a standard, and just like the 18-80mm it also incorporates image stabilization, autofocus, and auto iris functionality.

The 70-200mm is compatible with EF-mount Super 35mm large-format cameras, and Canon claims that the lens maintains brightness across the entire focal range at T4.4. Documentary shooters will also be happy to know that the new lens is also compatible with both the Canon EF 1.4x III (expanded focal range of 98-280mm) and EF 2x III (expanded focal range of 140mm-400mm) external extenders. The ability to use 1.4x and 2x extenders really increases this lens’s versatility. 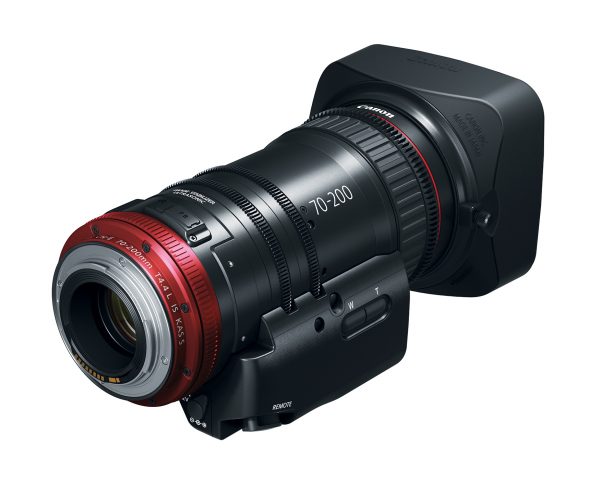 Shooters can control many of the features of the lens in a variety of ways through the EF-mount communication, including Dual Pixel CMOS AF, push auto iris, and record start and stop plus remote lens control via the camera with an optional remote. The lens also communicates with compatible Canon cameras to compensate for chromatic aberration and peripheral illumination. The lens can also generate its own metadata, and show users (again depending on the camera) your T-stop in the viewfinder or LCD.

The CN-E 70-200mm features a nine-blade iris which is one more than the Canon EF 70-200mm f/2.8L IS II USM has. The lens is claimed to produce nice “bokeh”, but without having seen the lens in person I can’t confirm that.

The minimum focusing distance is 1.2m (3.93ft) which is exactly the same as the Canon EF 70-200mm f/2.8L IS II USM. It will be interesting to see just how much focus breathing this new lens has. Most zooms with longer focal lengths tend to breathe quite a lot.

The lens comes equipped with a Servo Drive Unit, which allows users to switch between servo and manual modes, to give you motorized control of focus, zoom, and iris settings. The Servo Drive Unit is compatible with broadcast style industry-standard lens controllers including Canon’s ZSD-300D zoom demand and FPD-400D focus demand. 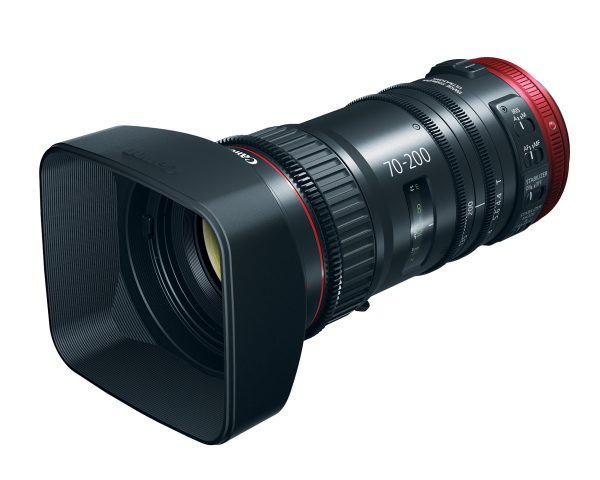 Just like the Canon compact servo 18-80mm Zoom Lens, the ZSG-C10 accessory grip will be compatible with the new CN-E 70-200mm. The grip connects to the lens through a 20-pin cable, allowing a variety of lens functions to be controlled from the grip, including zooming via a rocker switch, one-shot AF and starting and stopping recording. When the lens and grip are being used with the EOS C100 Mark II, EOS C300 Mark II and EOS C700 Cinema Cameras, users will also have the ability to control the zoom and iris from the camera’s grip unit.

It’s about time someone made a relatively affordable cine zoom with a 70-200mm range. Just about every shooter I know who uses Canon EF stills glass for video has a 70-200mm in their kit. With the addition of the CN-E 70-200mm T4.4 L IS KAS S Canon have clearly done their homework and come up with two lenses that can cover a large proportion of the focal lengths that most factual shooters use. 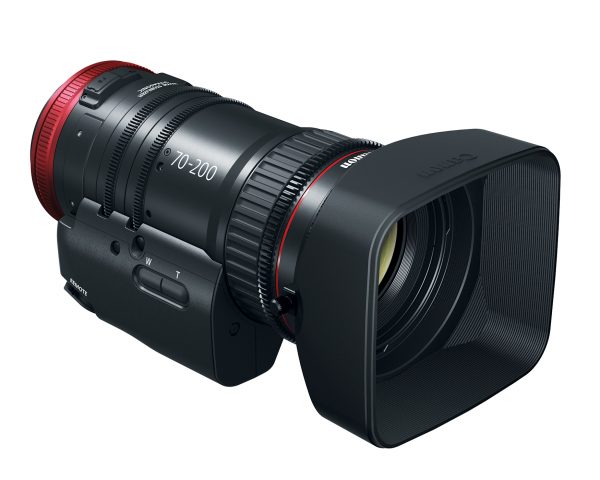 The Canon COMPACT-SERVO 70-200mm Zoom Lens is scheduled to be available in August 2017 and according to people I have talked to at Canon it should be around the exact same price of the 18-80mm T4.4 ($5,225 US). In addition, the ZSG-C10 accessory grip is currently available for an estimated retail price of $499 US.