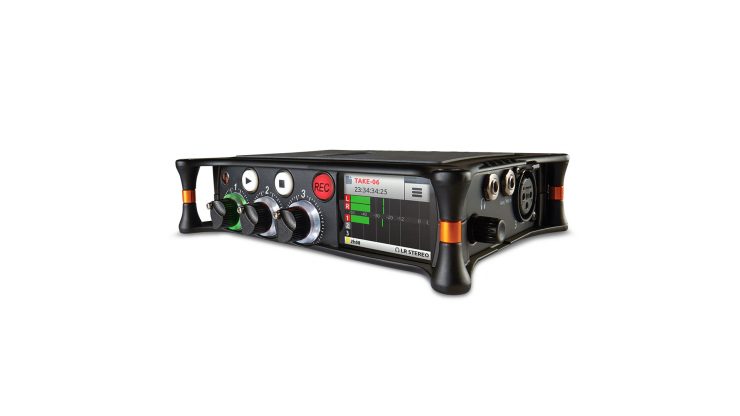 The new Sound Devices MixPre-3 and MixPre-6 are hybrid mixers and audio interfaces, aimed by the company at “musicians, sound designers, podcasters and videographers.” Sound Devices mixers are a common sight in the bag of many a sound recordist, and these new units are hoping to bring the quality and reliability of the company’s existing product line to a wider market.

Both the Sound Devices Mix Pre 3 and Mix Pre 6 are actually two devices in one. They are capable of accepting three or four inputs respectively and operating as a simple mixer on location. The boxes are designed to be able to sit under a DSLR-sized camera using a retractable ¼”-20 mounting point and can record to an internal SD card.

You can also stream the inputs over a USB connection, so you could quite easily use it to get a feed into a computer for use in a podcast or live web transmission. In a nice touch, you get USB A and USB C connections, so you’re probably future proofed for a good few weeks yet. The unit can be powered over the USB connection, as well as by a Sound Devices rechargeable battery sled or AA batteries.

The bodies are made from diecast aluminium, there are physical pots for gain control and there’s an IPS touchscreen for looking at levels. There are also new preamps that Sound Devices are calling ‘Kashmir’ – we’ve not heard them yet but if they’re a patch on the company’s existing hardware they’ll be among the best out there for noise control and quality of sound.

I’m going to leave it to Sound Devices to explain the differences between the two models:

So if your bread and butter is one- or two-person interviews, a Sound Devices MixPre-3 would fit the bill. For anything more ambitious, a MixPre-6 might be in order.

Are you Basic or Advanced?

There’s also a Basic mode for users who are maybe new to recording sound via a mixer, intended for “stereo recording applications, such as interviews, video blogs, music or podcasts.” Unlocking the Advanced mode allows access to features like “multi-channel recording and advanced settings, such as metering, routing, timecode, preamp gain, stereo channel linking, headphone presets and more.” So a ‘camera operator’ mode and a ‘soundie’ mode. I like it.

There’s an app for that

Sound Devices have also created a companion app called Wingman that connects to the MixPre units over Bluetooth.You can use to start/stop recording, enter/edit metadata, as well as arm, disarm and rename tracks on the MixPre recorder from a mobile device – so long as it’s running iOS. Having just been on a shoot where I watched our sound recordist having to painstakingly input filenames using the onboard interface, being able to type on a virtual keyboard for data entry seems like it could potentially be a huge timesaver.

No word on when they’ll be available to buy yet but the Sound Devices MixPre-3 will sell for $649 US and the MixPre-6 will sell for $899 US. We’ll be sure to check them out in the metal at NAB next week for some hands-on (ears-on?) time.