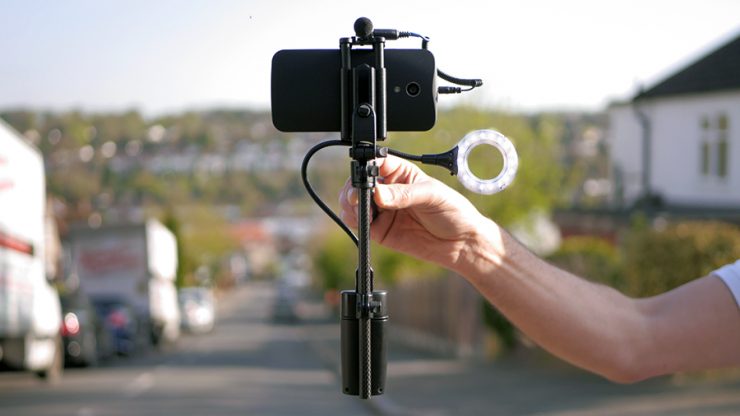 After a successful Kickstarter campaign for their pocket stabiliser, Smoovie are back with a new crowdfunding launch: the Smoovie miniRIG.

The miniRIG stabilises your smartphone or action camera using a magnetic gimbal, and features a simple balancing mechanism that doesn’t need counterweights. The handle is adjustable and your camera can be mounted horizontally, vertically, or underslung for low angle shots.

The gimbal itself features a pair of neodymium magnets for stabilisation. These are tuneable between ‘cinematic’ (loose) and ‘action’ (tight) modes, depending on the sort of day you’re having. Looking at the test footage from the company it’s not a magic bullet, but it will be very interesting to see how it interacts with the optical image stabilisation that’s now being built into smartphones like the iPhone 7.

The miniRIG will ship with an LED ringlight on a flexible mount and a small plug-in microphone. Both of these attach to the rig via integrated connectors. These are also compatible with accessories from other brands, like Rode, and Audio-Technica.

The miniRIG has a universal mount that holds ‘all popular smartphones,’ with rubber pads to keep your phone safe while it’s attached. An interchangeable adapter gives users the option to use the miniRIG with GoPro cameras.

The Kickstarter’s goal is to raise £10,000 to take the Smoovie miniRIG into production. Backers can support at various reward levels: a limited number can get their miniRIG at an early bird price of £38. The standard Kickstarter price is £50 and the eventual estimated RRP is £70.

As ever, you should think carefully before backing any crowdfunding campaign, as there’s always the chance you’ll pledge money for a product that will never see the light of day. Having said that, Smoovie’s original project came good – they raised over £140,000 from over 6,000 backers – and this looks like an interesting development.

We’ve asked to see a review unit when they’re available, so check back in the summer. Until then if the mood takes you, you can back the miniRIG on Kickstarter here.