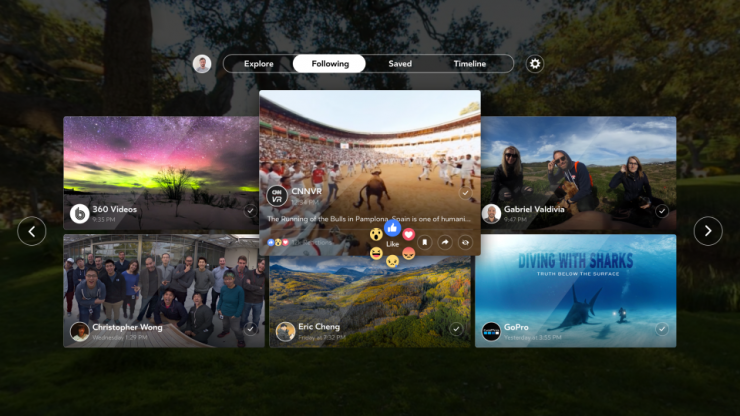 Most peoples’ first experiences with 360 content don’t happen in a headset. They usually happen on a phone or desktop, on Facebook, by accident.

But Facebook’s latest announcement hopes to change that by making the social site’s 360 content a destination for VR headset users, rather than a happy accident as users scroll through their newsfeeds on flat screens.

The app aims to make it easier to explore the 25 million 360 photos and 1 million 360 videos users have posted since Facebook began supporting spherical content in 2015—in a much more immersive way–in a VR headset.

It also allows viewers to react to, share and save content for later, all from within their headsets. Facebook said it expects to release “more social features” soon.

With more than 5 million Gear VR headsets on the market, Facebook’s choice to create an app for the Gear—rather than its own Oculus—means more users will be able to use the new Facebook 360 app. And, considering Oculus powers the Gear VR (and helped develop the latest version), it seems like a smart first step.

To download, open the Oculus app on a Gear-compatible Samsung device and search for Facebook 360, or visit the Oculus site.