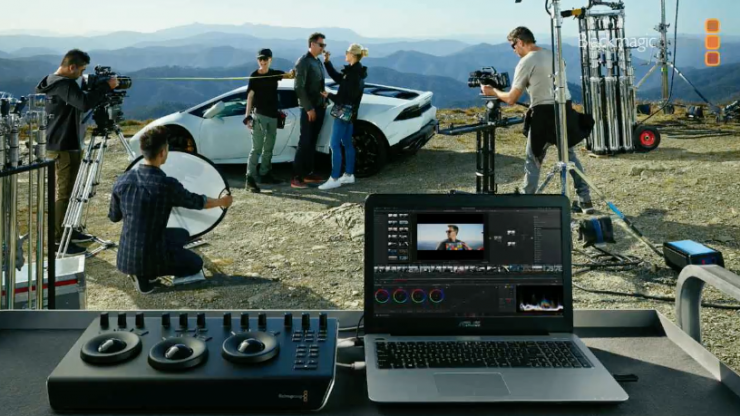 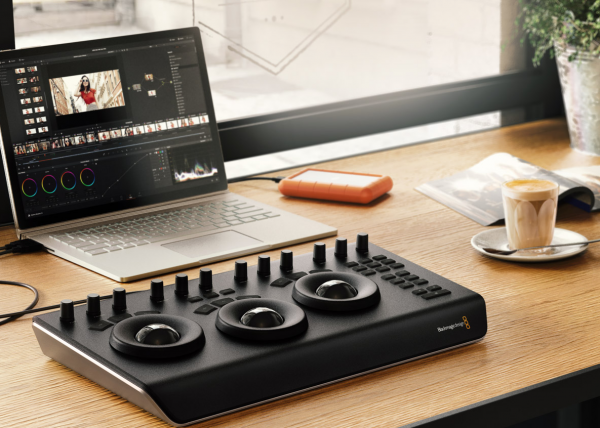 Blackmagic found that a lot of people are now using DaVinci Resolve as both an edit and colour correction program, and that people were finding it very difficult to do proper colour correction with a mouse and keyboard. They saw a need for smaller control panels that still kept the same high quality that was found in their advanced panels. 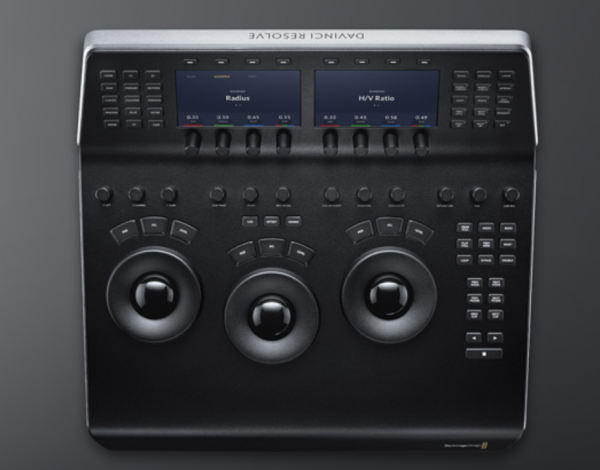 According to Blackmagic “A lot of the cheap panels available on the market aren’t up to scratch”, so they set out to build their own affordable, more portable control panels. These new panels, especially the Micro look like a very good portable option or even as a controller you can keep on your desk at home.

Davinci Resolve Micro Panel
This new panel has been designed to sit next to a laptop, or desktop for those users doing both editing and grading on the same computer. It is powered via USB-C, but Blackmagic give you a USB 3 to USB-C cable. Power over USB means you can use it with a laptop and it will operate from the laptop’s battery, making it ideal for on set grading. The Micro is plug and play and will work with the new release of DaVinci Resolve 12.5.5 which is available from today.

There are three track balls that have the same quality feel as those used on the advanced panels. The only difference is that they are slightly smaller.

The Micro features a portable low profile panel with three high resolution trackballs. The track balls have the same quality feel as those used on the advanced panels. The only difference is that they are slightly smaller. The panel also has 12 precision machined control knobs for accessing all essential primary color correction tools. Above the center trackball are keys for switching between log and offset color correction, as well as a key to display DaVinci Resolve’s full screen viewer, which is great for use with laptops.

Eighteen dedicated keys on the right side also give you access to the most commonly used grading features and playback controls. 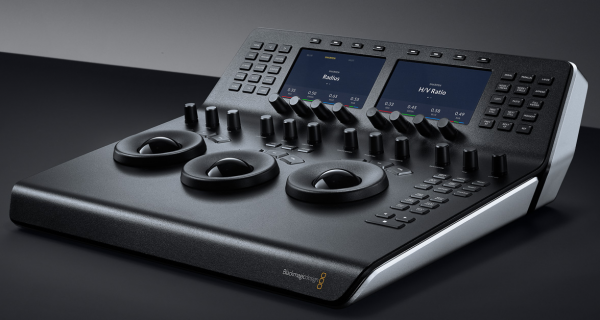 DaVinci Resolve Mini Panel
Designed for editing stations that switch between grading and editing, and for users who want to take a more portable panel on location.

Like the Micro panel, there are three professional trackballs along with a variety of buttons for switching tools, adding color correctors and navigating your node tree. It also features two color LCD screens that display menus, controls and parameter settings for the selected tool, along with direct access buttons that let you go direct to the menus for specific DaVinci features. The DaVinci Resolve Mini Panel is ideal for editors and colorists that need to regularly switch between editing and color grading, or for freelance colorists that need to take their panel with them when moving between facilities.

The DaVinci Resolve Mini Panel includes ethernet so it can operate via your network, making it fantastic for larger facilities. Plus, the ethernet PoE support means it can even power itself via the network connection so you don’t need to plug in the power connection.

The panels offer the following controls: 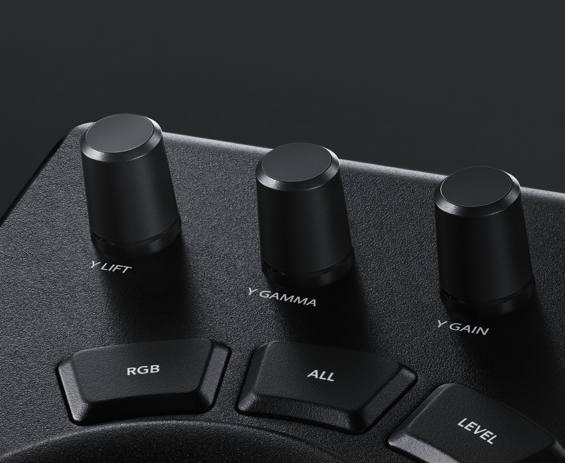 Y Lift
Adjust the contrast of the image in the darker areas, specifically in the Y (luminance) channel only. This adjustment is great for a changing the black point without changing saturation.

Y Gamma
Adjust the contrast of the image in the mid-tone areas, specifically in the Y (luminance) channel only. This control helps add depth to shots, along with extra vibrancy.

Y Gain
Adjust the contrast of the image in the brighter areas, specifically in the Y (luminance) channel only. You can reduce hot shots or pull the whites to make the shot look more angelic. 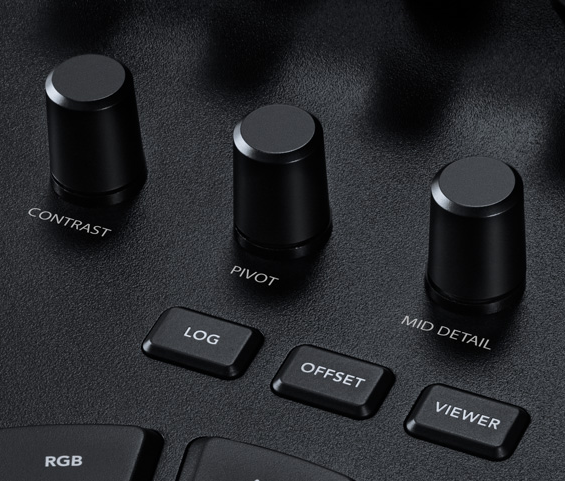 Pivot
Changes the center of tonality about which dark and bright parts of the image are stretched or narrowed during a contrast adjustment. 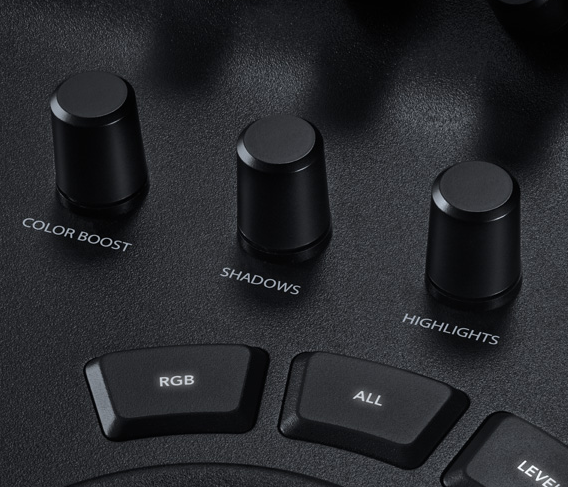 Colour Boost
Naturally raise the saturation in regions of the image with low saturation while leaving properly saturated areas alone. Sometimes referred to as a vibrance operation, this is great for adding color without over saturating the image.

Highlights
Easily retrieve blown out highlight detail in high dynamic range media by lowering this parameter to achieve a smooth blend between the retrieved highlights and the unadjusted mid tones for a natural result. 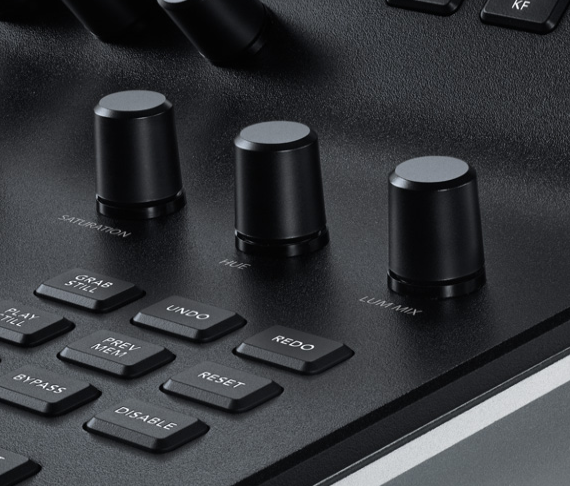 Saturation
Increases or decreases overall image saturation. At higher values, colors appear more intense, while at lower values color intensity diminishes and can be adjusted until all color is gone, leaving a grayscale image.

Hue
Rotates all hues of the image around the full perimeter of the color wheel. The default setting is 50, which retains the original unaffected distribution of hues.

Luminance Mix
Control the balance between the YRGB adjustments and Y only adjustments made using the Y channel lift, gamma and gain controls in the primaries palette or the un-ganged luma curve.

Professional Trackballs
Trackballs provide RGB balance adjustments for lift, gamma and gain, each with a master level control. The Advanced panel also features a dedicated RGB offset and master gain trackball to adjust the tint and brightness of the entire image. The trackballs can be set to work in either log or RGB with the touch of a button. 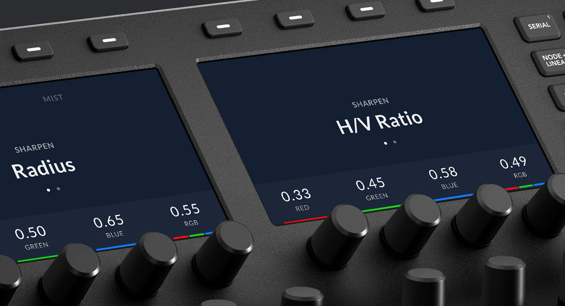 Soft Knobs
With 30 customizable soft knobs on the DaVinci Resolve Advanced Panel and 8 on the Mini panel, you get super high resolution, flexible parameter adjustments that you can reset back to the default with a simple push.

These new panels look to be very well made and should work seamlessly with DaVinci Resolve. It is not known whether they will be compatible with any other colour correction software that is currently on the market.