Kessler have announced Kwik Rail which is a new thread-together speed rail designed for the Shuttle Dolly but it can also be used with a variety of other speed rail dollies.

What makes Kwik Rail unique is that by eliminating the need for connectors or coupling devices to attach two pieces of rail together you eliminate having to use and carry unnecessary parts that can get lost. It also reduces the amount of seams on the dolly rail which allows for smoother dolly travel. By utilising the integrated Kwik Thread™ design, the connection between rail sections becomes very secure and incredibly fast to set up. Kessler claims it is up to four times faster than setting up a traditional speed rail. 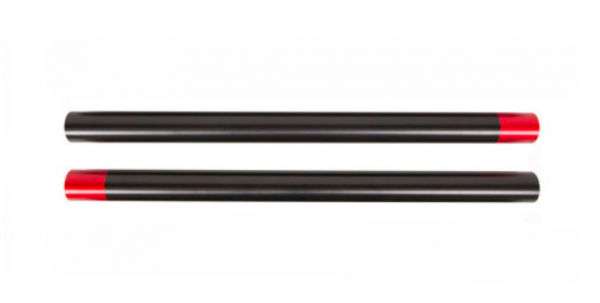 The Kwik Rail comes in two sizes, 4’ (42.375”) and 2’ (23.875”) and includes aluminum thread protectors that ensures your threads are not damaged during travel or in-use. The anodized 6061 T6 aluminum schedule 80 pipe used for the Kwik Rail has thicker walls than many other speed rails available, yet is claimed to be drastically lighter than traditional steel speed rail.

One of the main advantages of using the Kwik Rail system is that you can get very long dolly shots without having to carry long sections of speed rail to a shoot. Often traveling with a 20’ long section of speed rail is a logistical nightmare and requires a certain sized vehicle to transport it. With the Kessler Kwik Rail you can easily take a whole system with you even in the smallest of cars.

I really like the look of the Kwik Rail Leg System as it allows yo to use a dolly on uneven surfaces which is one of the main stumbling blocks of other competing products. The adjustable feet on the legs let you make finite adjustments which is important for getting the system nice and level.

The Kwik Rail site can support a weight capacity of 125 lbs (56.69kg) which makes it suitable for the largest of camera packages. Kessler do, however, recommend that you support the rail at 8′ intervals.

Above you can see a video from NAB 2016 where we first showed you the leg supports that are now part of the Kwik Rail Leg System.

The Kessler Kwik Rail looks to be very well made and is quite affordably priced compared to some of its competition. Kessler also provides a host of compatible accessories that will work with the Kwik Rail system.

KWIK RAIL LEG SYSTEM
The complete Kwik Rail Leg System provides users with everything they need to use Kwik Rail as the supports for the Shuttle Dolly, including four 42’ Kwik Rail segments used as the legs, four Kwik Rail Clamps that feature a safety-lock mechanism for attaching the legs to the dolly track rail and four rubber Kwik Rail Foot Adapters.
MSRP $999.90US

Specifications
Comes in 2 sizes: 42” and 24”
Weight capacity of 125 lbs
Support it every 5’ for best use
Can be used as dolly track and/or leg supports for Shuttle Dolly
Lightweight and durable anodized aluminum
Comes with Thread Protectors to keep rail threads protected
Custom hard case available to keep protected and travel with