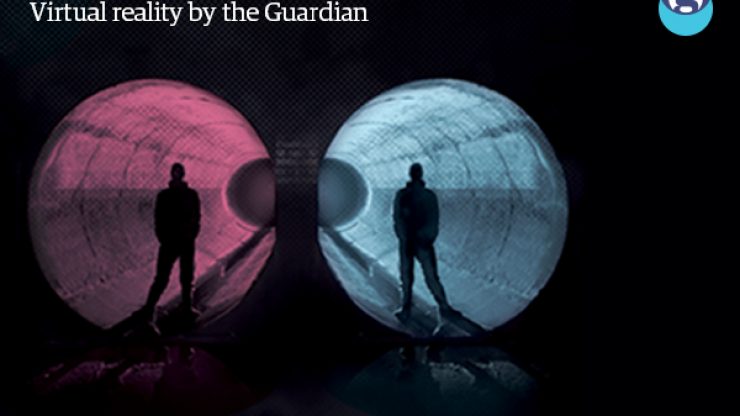 With two original pieces already published (its first VR piece, 6×9, was released to much acclaim in April of 2016 and its second VR experience, Underworld, launched in November), Executive Editor of VR Francesca Panetta expects to pick up the pace dramatically in 2017. With a recently announced dedicated virtual reality team, she expects to put out a dozen original VR pieces over the next 18 months.

We had the chance to sit down with Panetta to discover what she’s learned so far and what to expect in 2017. Read on for the full details…

1. A lot of news organizations’ approach to VR has been focused on 360 video, but both of the Guardian’s pieces have been CGI. What made you decide to use CGI for Underworld, and do you expect to use video in upcoming VR stories?

“In Underworld, viewers can navigate the tunnel system on their own,” Panetta said. “The only way to do that was to recreate the architecture of it. If we had filmed it, you wouldn’t be able to move. I think there’s an element of agency.”

“We’re thinking about how you can feel like part of the story in addition to looking and listening,” she added. In Underworld, viewers can move through the space and the controller acts as your torch, but along the way, the tunnels include real interviews and historical myths narrated by an urban explorer. “All that is real interview materials, and the environment is real in that it’s a true reconstruction inside a game engine.”

“There’s also the question of realism—do you want it to look really real?—if so, you may want to film it,” she said. “You also really have to work out what your storyline is.”

Although both of its existing pieces are CGI, Panetta expects to use both video and CGI in upcoming stories. She even sees an opportunity to combine video and CGI. “We’re working on a story right now where we merge the two together.”

2. In addition to how a story should be approached in VR, there’s also the question of whether or not a story will work in VR. Can you talk about your team’s story selection process?

“Each time we ask why this story should be a VR piece” she said. “A lot of ideas get struck off the list at that stage.”

Although she doesn’t see many rules in VR, she does recognize some general tendencies about what works in VR, including embodiment (why must you be in that space?) and perspective (for example, the viewer as the protagonist of the story).

“We’ve been really interested in first person narratives, which is really interesting for us as a news organization,” she said. “It’s something we haven’t done in the past.”

3. VR is still in such an experimental phase. Based on your previous projects, what have you noticed does (and doesn’t) work artistically in VR?

“You definitely see a quite a lot that should be films rather than 360,” she said, “like when the people you should be looking at are doing certain actions. In that case, it would just be better if you could film them beautifully.”

She also said being in a fixed position all the time is limiting to the medium, but that movement can be tricky. “I’m seeing a lot of shots from car passenger seats.”

However, Panetta adds, she thinks there will be a lot to learn from all forms and approaches to VR—from CGI to quick-turn 360 video. To get inspiration for the Guardian’s pieces, she watches as much as she can.

“It’s trying to look as far afield as you can in the VR sphere at all kinds of different forms,” she said. “You learn from each piece, but we’re also learning from others’ stories as well as our own. We’re all prototyping different techniques and perspectives.”

Although Panetta said she doesn’t see anything as “wrong” when it comes to VR—everyone is just experimenting—she thinks how pieces are made will dictate how they are consumed.

“I don’t think the one-a-day pieces from the New York Times will be consumed in headsets as much, but they’re really fun [to watch] on mobile and laptops,” she said. “But I see them as different forms, 360 video in a headset versus on a computer. It’s such a different experience.”

4. Ethics has been a significant concern when it comes to VR journalism. People are concerned about journalists hiding from the cameras, the balance between empathy and activism, etc. What’s your perspective on the ethics of VR?

“I don’t see VR as problematic in terms of ethics,” Panetta said. “It’s just a different medium, but we are making decisions all the time about how we interpret a story, what quotes to use. Maybe that’s because our organization is very clear about its ethics…I’m not particularly worried about it.”

Journalism, she said, is still at the heart of every story they produce. “When you watch something like Underworld, you don’t necessarily see the huge amount of reporting, you don’t see or hear those interviews. It’s a really solid piece of journalism.”

5. When you were interviewed on the Voices of VR podcast, you mentioned your background is in sound rather than in film production, and that it has actually helped you craft better VR narratives. How have you utilized that experience in the Guardian’s VR stories?

“For all the projects we’ve worked on—and we’re now working on our third—we’re blocking out the story and then building visuals around that,” she said. For the most part, the narrative of the Guardian’s VR experiences has been guided by sound. But there is a limit as to how much sound someone can absorb without it distracting from looking around, she added.

“We stripped Underworld down. If all attention is going toward digesting info, but there’s a dislocation between what you’re being told and the visual environment around you, it doesn’t work,” she said. “We’re still trying to figure out the best way to make the environment and story support each other and not contradict one another.”

Over the next 18 months, Panetta said to expect a dozen or so VR experiences from the Guardian, ranging from sports and cooking to fashion and even investigative reporting.