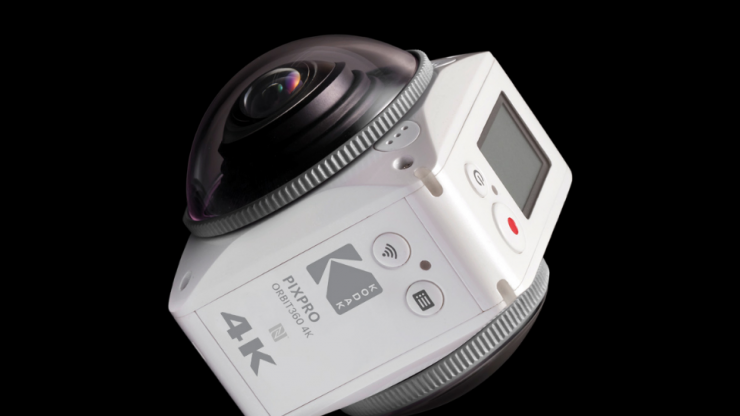 Kodak’s first 360 camera—the SP360—was actually two devices, but the PixPro Orbit360 is one device with two 20-megapixel lenses offering 4K video at 24 fps. The camera also allows users to shoot using either and/or both lenses. Like the Nikon Keymission 360 and Ricoh Theta cameras, the Orbit360 stitches the footage within the camera.

The body is very similar to the Nikon Keymission 360, but the Orbit360 lenses are different sizes. One has a 235-degree field of view and the other, 155 degrees. That means the stitch line isn’t set at 180 degrees, giving users a bit of flexibility to decide the camera’s orientation based on what’s happening in the scene.

The camera can be controlled via an Android and iOS app, but also comes with a wearable remote control to start and stop recording, select which lens(es) will be used and choose photo or video mode. Videos and photos can be shared to YouTube and Facebook from within the app.

As an action cam, you can drop it (up to 2 meters), take it out in below-freezing weather (-10 Celsius), and spray it with water. It’s available for pre-order now at $499 and is set to ship in April.

What’s notable about the Vyu360 camera is its live preview and playback options and the Vyu360 Envision VR Viewfinder you can mount it to (and watch from within) while you shoot. You’ll only look slightly more dorky than you do with a GoPro strapped to your head…

The Vyu360 camera is also waterproof up to 90 feet and can be controlled via Android and iOS apps. The camera is listed as available for $179 on its Kickstarter page.

Another newly-launched camera is the MySight360, which actually shoots 4K video with a 240-degree field of view. The camera is small—a little larger than a roll of quarters—and can clip onto straps, hats, etc.

Although that sort of motion might sound nausea-inducing, one of the most interesting features of the MySight is its horizon calibration feature, which you can see in action here.

The MySight360 is available for pre-order on Kickstarter for $189 will is expected to ship in the second quarter of 2017.