Sometimes, resolution just doesn’t matter that much. Whew. I said it. I survived.

It’s a statement that usually leads to an argument (at worst) or silence (at best) in this industry, because—guess what?—we really really care about resolution. We’re constantly upgrading our kits to improve quality because quality matters to us.

What we may not like to admit is that sometimes quality doesn’t matter quite as much to our audience. After all, just look at the 4K TV market.

That’s also the expectation of the makers of the Sphere lens, which enables DSLR users to shoot 360 video simply, without seams or stitching.

“Most content today is consumed on handheld devices—I think the number is close to 85 percent,” Englert said.

So, right now, mobile 360 video quality is limited both by the resolution of our phones and the quality of the lenses within our Google Cardboards and Samsung Gears.

That means delivering an 8K 360 video is like delivering 4K quality to our TVs. To the vast majority of people (between 80 and 90 percent in both cases), it just doesn’t matter.

Instead, Englert and Sphere cofounder Meyer Giordano hope that the mobile 360 audience will prefer seamless and simple-to-produce (i.e. more frequent) experiences rather than ever-higher resolution.

And that’s exactly where Sphere delivers. The single lens, single camera 360 solution allows users to shoot extremely close (up to 1mm) without seams or parallax issues, requires no stitching, and works with almost any DSLR camera (Nikon F mount, but adaptable to most others).

“The Sphere lens allows users who are currently shooting conventional content to quickly and easily shoot immersive content with a low barrier to entry,” said cofounder Rob Englert. “A shooter can shoot traditional content, then switch to the Sphere lens and quickly capture full spherical content.”

As an accessory, the final image resolution depends entirely on your camera, but Englert said a good rule of thumb is that you’ll achieve roughly 5/8th the total resolution available on the camera when using the attachment. With current 4K sensors the resolutions are therefore quite low, but you can already put the Sphere on a RED 8K camera if you want significantly better quality. As sensors improve in the coming years higher resolutions like 6K and 8K should become more readily available in prosumer gear.

“The Sphere lens only gets better with higher resolution sensors,” Englert said. “This is another reason we focused only on the optics, as sensor technology improves so does our lens.”

Englert and Giordano decided early on that they would focus on an optical solution, rather than building a camera from the ground up. The goal? A simple 360 solution that DSLRs can grow into over time.

“We started by making films with GoPro arrays, on rigs we 3D-printed in our office,” Englert said. “But we knew there had to be a better way to deal with multiple camera files and stitching, and that’s when [we] had an ‘aha’ moment to create what is essentially a revolved fisheye lens.”

It has a fixed aperture of F8 and a fixed focus of 40 inches that can be adjusted with a helicoid adapter. For someone with a whole lot of kit already, the Sphere lens can be a 360 video solution that relies on the gear you already own and doesn’t disrupt your existing workflow.

That said, some cameras do play more nicely with Sphere than others.

The image circle created by the lens is constrained by the vertical pixel height of the sensor, so the best case scenario would be to use the Sphere lens with a camera sensor in which the circle will be bounded by the shortest side of the image sensor.

“Originally we designed the system specifically for the Sony A7s2 because of its low light capability and ability to shoot 4K,” Englert said. “The fact the GH4 allows 4:3 (or 1:1) enabled us to squeeze a touch more resolution out, but unfortunately it does some minor cropping.” That results in a bit of a “knot” at the nadir.

“When the lens is used on cameras with smaller image sensors (Super 35, APS-C, etc) an optical adapter (focal reducer) such as the Metabones Speedbooster is necessary to shrink the image circle,” Englert said. This also has the benefit of increasing the amount of light hitting the sensor, reducing noise in lower light conditions.

Because Sphere is a single lens relying on a single camera, the final footage is seamless and can be managed using existing workflows.

“Currently we have to convert our native projection to the standard equirectangular so that it can be played on existing 360 players,” Englert said. “Our native processing is simple enough to be handled by a typical smartphone in real time.”

Although Englert doesn’t expect all future VR content to be shot on a single camera, he has high hopes for Sphere’s future.

“We think the lens is ideally suited for journalistic and documentary efforts because of its small footprint and its ability to quickly share or stream immersive content,” Englert said. “The convenience of creating and sharing content quickly may win out over resolution in short term.”

Sphere lenses are currently available for rent, with a limited quantity available for purchase online. Sphere also hopes to release a consumer lens for smartphones and GoPros in the near future. 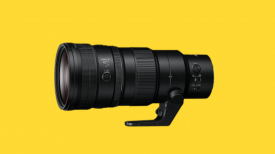