I bought a Nikon KeyMission 360 recently and tried it out on Halloween night in New York City, where thousands of ghouls and goblins marched in the 43rd annual Greenwich Village parade.

I’ve been interested in 360-degree imaging since Quicktime VR first came out ages ago, and did many Flash-based still-photo panoramas back in the day. When 360-degree video became a thing, I got a Ricoh Theta and have been playing with it for a while. 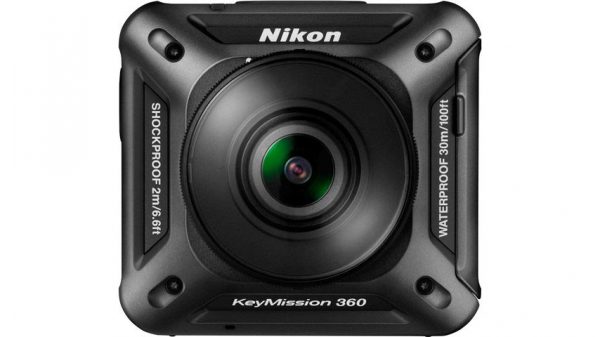 I’m a photojournalist and don’t have time to rig up multiple cameras and then stitch. The all-in-one aspects of the Ricoh Theta and now the Nikon KeyMission are key to producing 360 videos quickly. Unfortunately, the Theta is hampered by low quality. The new KeyMission 360, however, shoots in 4k, producing a single file that doesn’t need stitching but I think it is ‘good enough’ to not be distractingly low resolution on playback.

Above are a few clips from the camera. You can use your mouse to view in different directions, or if you are using a iPad or iPhone then you can simply wave it around. Make sure you set the playback quality to 4k to see the resolution.

With a single file coming out of the camera, it’s easy to drop some clips into an editing program and output a video, which will look bizarre (see below) until you load it into a 360 player. You’ll need to use a third-party program to put 360-degree metadata on your file, then upload to YouTube or Facebook to be able to experience it as VR. Editing in a regular NLE doesn’t give you control over the camera orientation, but for quick and dirty output, the KeyMission and a regular editing program is the way to go.

The Nikon KeyMission 360 is surprisingly good in low light. I used it on a monopod and broke all the VR rules, moving the camera along with the parade marchers while handholding it and being clearly visible in the shots. I was happy with the results.

The Nikon app to control the camera is clumsy, and once you’ve used it to set the camera to 4k, I recommend turning off the wifi and bluetooth and just hitting the buttons on the camera body to start and stop the recording or take a picture.  One thing that took me a bit to figure out is that hitting the record/power button (they’re one and the same) simultaneously turns on the camera and starts recording – but the time to power-on is very fast.  When you hit the button to stop recording, it will turn itself off after a brief time, saving on battery life. It uses a EN-EL12 battery.

The Nikon SnapBridge 360/170 app for your phone is hard to set up (at least in the iOS version I used on my iPhone.)  It finds your camera by bluetooth but then needs wifi to actually do anything. The wifi password for the camera is “NikonKeyMission” but I only was able to find that out from a web search because I didn’t see it in either the camera package or the app (in Nikon’s defense it is in the app if you dive into the help menu.)

You can remotely preview the image on the app, but surprisingly not while you’re actually recording video. You can browse your shots after you’ve recorded them.

Using the app with the camera is painful.  You have to turn the camera on, start the SnapBridge 360 app and connect via bluetooth; then use the app to turn on the camera wifi, then use your phone wifi control to connect to the camera wifi. The remote start/stop from your phone defaults to a 2-second self timer. Better to just hit the little switch on the camera that puts it in airplane mode and forget the app. On the positive side, you can control the image for: underwater; ‘Active D-Lighting,’ which changes the dynamic range; white balance; standard or vivid or monochrome color settings; and up to two stops exposure compensation.

The Nikon KeyMission 360 is a two-lens camera that stitches internally. The stitch is pretty good at a distance, but things close to the camera will have visible defects in the stitch. You need to orient the camera so the lenses face the important parts of your scene.  (Hint: the side of the camera that says “Nikon” is opposite the default orientation of the video clip. Point the unlabeled side toward your main subject.)

As more VR solutions come to market, I’m sure we’ll look back on these early days of 360-degree video and laugh at the quality. But for now, the KeyMission 360, which is under $500 US, is an easy way to produce 360-degree video and takes almost no room in your bag. It’s waterproof without a housing and comes with a base that will fit in GoPro mounts.