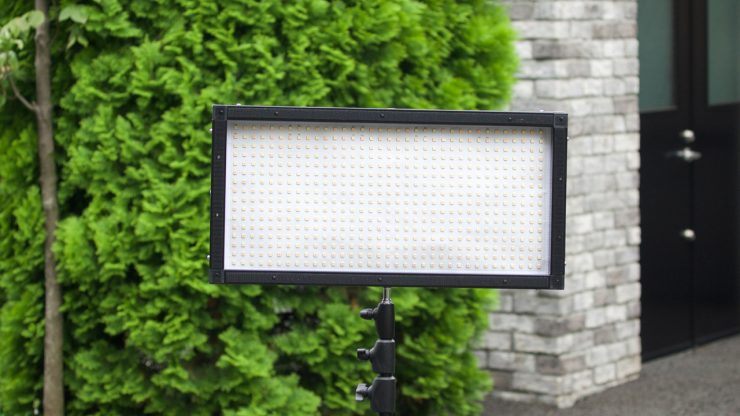 Flexible LED lights are becoming increasingly popular. Their lightweight design, flexibility and colour accuracy has made them a favourite among shooters. They take up such a small amount of space in a bag, and they weigh almost nothing. This gives them a huge advantage over most other lights when your travelling.

One of the most popular brands of flexible LED lights is Westcott. I own two of their original daylight 1×1 Flex panels and they have become a regular part of my lighting kit. I mainly use them these days as backlights for interviews or to place on walls in tandem to illuminate larger areas. For a main key light I prefer something with a bit more punch, and that’s where the larger Flex Bi-Color LED Mat Cine Set (1′ x 2′) comes in. I have recently been putting the light through its paces to see just how well it performs and how colour accurate it is. 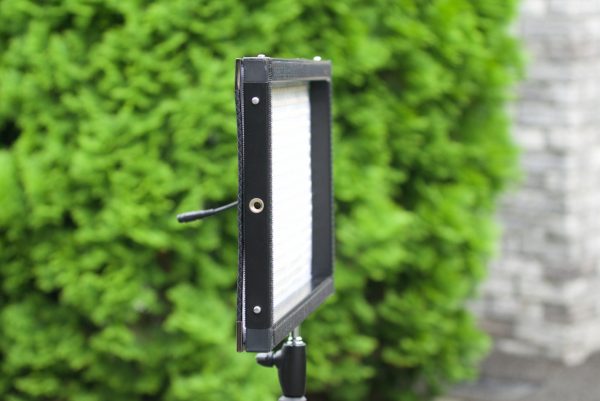 The Westcott Flex LED lights are made in Korea just like their nearest competitor Aladdin. Westcott were recently awarded a patent for their flexible LED technology, what this will now mean for Aladdin is unclear. I recently reviewed the Aladdin Bi-Flex 2×1, so it will be interesting to see how the Westcott compares. 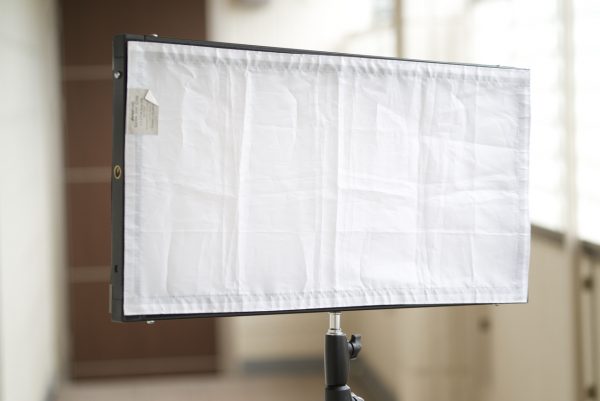 The Westcott Flex Bi-Color 1’x2′ LED comes in a Cine set. This includes a bendable 1′ x 2′ Flex LED mat with Scrim Jim Cine framework to build a 1′ x 2′ frame, a matching Scrim Jim Cine full-stop diffuser fabric, a dimmer control unit with 16′ dimmer extension cable, and a cable wrap, as well as a universal brass stud and dual-socket magic arm for mounting. This kit gives you a fair bit of flexibility as to what you can do with the light depending on your requirements. 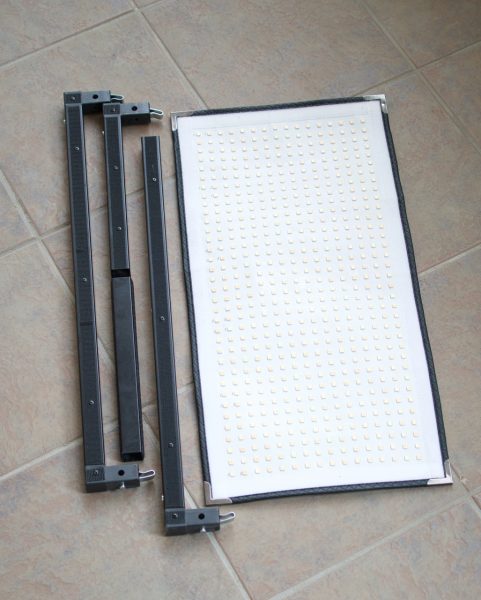 The Scrim Jim Cine framework is very easy to set up and it provides a nice solid base to attach the Flex LED mat to. On the actual frame itself there are 3/8″ mounting points on all four pieces that allow you to mount the frame vertically or horizontally depending on your needs. The only downside in having to use the framework is that you have to carry it around and find somewhere to keep it. 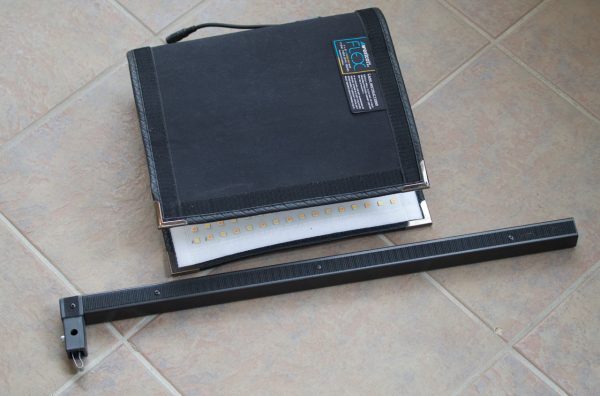 The Flex LED mat is bendable so you can make it fit in a variety of different bags, unfortunately the frame only breaks down into four pieces and the longest one is still 61cm (24″). This means that if you want to keep it with the Flex mat then you need a bag that is big enough to also fit the frame. In fairness you could keep the the Scrim Jim Cine framework separately, but I prefer to keep all of my lighting components in the same place. I would have liked to have seen Westcott make a different mounting solution for this very reason. 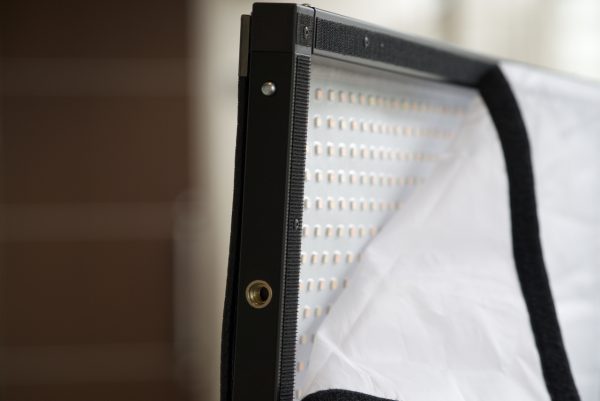 Once the light is on the frame you can attach the full-stop diffuser fabric via velcro to help soften up the light. If you’re using the light for interviews then using the diffuser fabric really is a must. I find that without it the light source looks too harsh on peoples’ faces. Westcott also make a optional portable softbox which mounts directly to the mat or Scrim Jim Cine frames and the included 1/4-stop silk diffusion panel. It attaches using hook-and-loop fasteners. 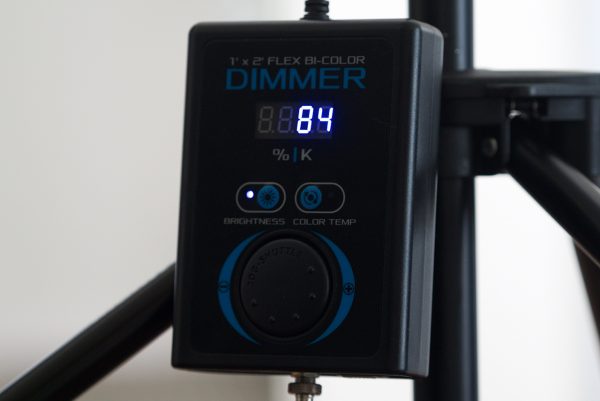 Once your light is fully assembled you can attach it to the dimmer box which in turn attaches to the power supply unit. The dimmer box features an LED display, two buttons to toggle between the brightness and colour temperature and a large circular dial that is used to make your adjustments. The controls are very straightforward and easy to use, making adjustments pain free. The box itself is made out of a hard plastic and the cable going from the light to the dimmer unit is 100cm (39.37″) long, but there is a 16′ dimmer extension cable if you need to make it longer. 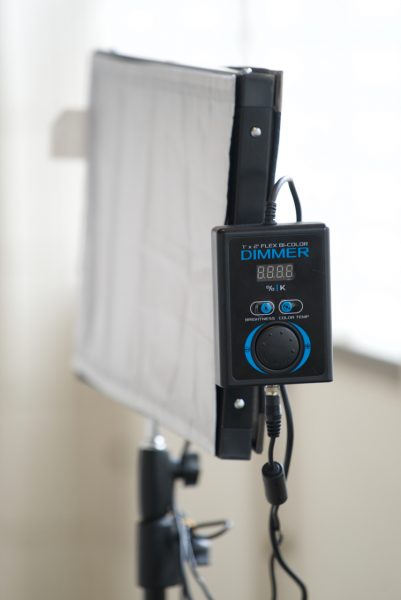 The dimmer has a 1/4 20″ mounting point on the back of it so you can attach it to the frame. I found this a little bit impractical and I would of preferred to see a hook or a strap on the dimmer box so you could attach it onto a light stand instead. Unlike the Aladdin Bi-Flex 2×1, the Westcott dimmer box doesn’t have a built in battery plate, so if you want to power the light via a battery you need to use an additional D-tap cable and then figure out where to place your battery. The light will work with any 21V d-tap/p-tap battery. Westcott don’t currently have their own battery solution for the 1×2, but they will have multiple options available in the future (including D-Tap, Gold mount and V-lock).

While the Westcott doesn’t quite reach the figures we get from the Aladdin, it is very close. The Westcott is right up there with the most colour accurate lights I have tested, and the results are very consistent whether the light is set at 5600k or 3200k. Westcott claim a average CRI (R1-R8) of 95-98, and my testing proved these claims to be accurate. 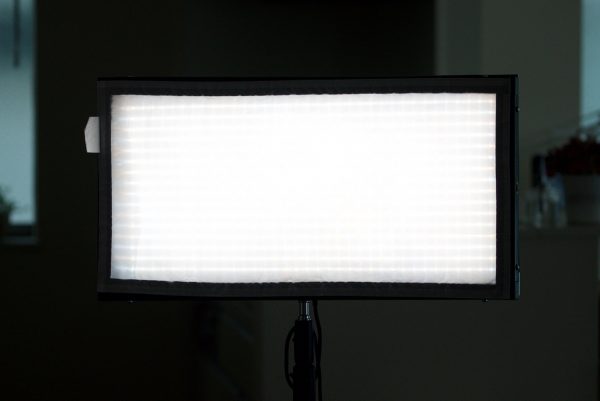 Now that we have gotten all those facts and figures out of the way, just how does the light perform? I’m happy to say that the light that it produces is very pleasing regardless of what colour temperature you are using. Operationally the dimmer unit is easy to use and I like how the light can actually be dimmed all the way down to 1%, the Aladdin Bi-Flex 2×1 in comparison turns completely off once you reach about 10%. As I mentioned earlier I wish the mounting options were better for the dimmer box and I would have liked to have seen a integrated battery plate like Aladdin have done with their version. The Scrim Jim frame is nice to use, but it does severely limit your mounting options. The Aladdin in this respect is far more versatile as it comes with a mounting bracket that’s much easier to transport, and loop hooks on the light itself if you need to attach it to something. Both the Aladdin and Westcott come with a long cable that allows you to place the light up very high while still keeping the dimer box at ground level. 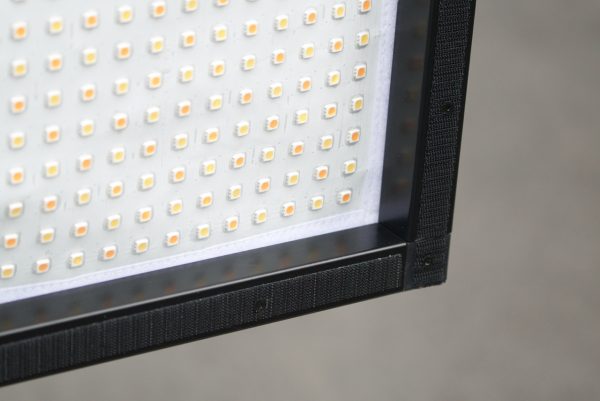 While the Westcott lacks some of the the polish and small features that make the Aladdin so appealing it does come in at more than $500 US cheaper. I think Westcott have done a great job with the 1’x2′ Flex Bi-Color LED Mat Cine Set, and despite some of its small flaws (and they are small) it provides a very colour accurate and easy to use lighting solution. There is certainly room for improvement in the design and usability of the light, but I think the majority of shooters would be very happy having the light as part of their kit.