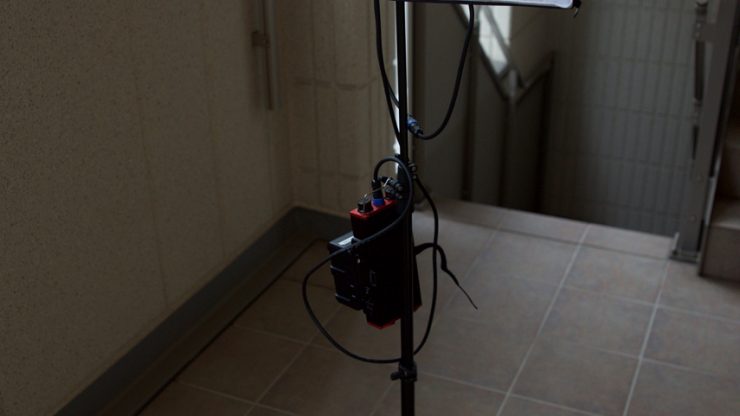 It is no secret that I am a big fan of flexible LED lights. If you work in news, documentary or run and gun environments and are looking for a lightweight, robust, versatile, battery powered and colour accurate solution they are very hard to beat. A light that has quickly become one of my favourite to use is the Aladdin Bi-Flex 2×1 Lite. As its name suggests, it is 2′ by 1′ and has a colour temperature range of 3000 to 6000k. There are quite a few other companies making flexible LED lights, but in my opinion, Aladdin’s products are better made and a lot more thought has gone into their design and what is included as standard accessories. With a lot of other systems, you need to purchase many additional accessories to make the light usable.

I own a couple of smaller daylight 1×1 flexible panel lights, and although I am really happy with them, I have been looking for a bi-colour, and more powerful solution. The Bi-Flex 2×1 Lite weighs in at a ridiculously low 440g (0.97lb). To put that in perspective, the smaller 1×1 Litepanels Astra Bi-Colour Soft weighs in at 3.4kg (7.49lb). This is one of the huge advantages of using a flexible LED light. You can easily transport it, bend it into any shape you want and you can mount it just about anywhere to anything. This is something you just can’t do with traditional 1×1 panels. The other advantage the Flex Lite has over a 1×1 panel is that it uses a waterproof fabric and is IP 67 rated, so you don’t have any problems using it even in the most trying of weather conditions. IP 67 rated means that it is 100% protected against solid objects like dust and sand, and it has been tested to work for at least 30 minutes while under 15cm to 1m of water.

While the weight, versatility and waterproof qualities of the Bi-Flex all sound great, that means very little if the light isn’t colour accurate and doesn’t have a good amount of output. I tested the Aladdin using a Sekonic C-700 and it turned out to be the most colour accurate light I have tested to date. That is no mean feat given that I have tested a lights from companies such as Cineo, Arri, BB&S and Kino Flo. Below you can see the lights photometric scores when tested at 6000k. 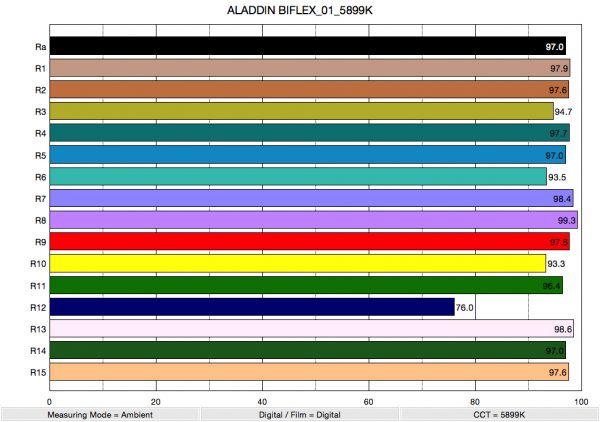 When I tested the light at its lowest Kelvin setting of 3000 it performed even better. Below you can see those results. 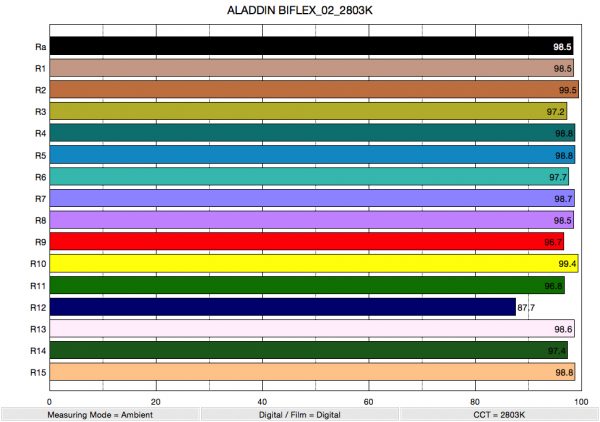 The lights photometric results speak for themselves, but again that is just ticking off another box. A lot of lights that that are available these days require you to buy so many additional optional extras to give you a workable system. Usually the battery plate, longer connection cables, mounts and diffusion are all extra expenses that can make a light’s bottom line substantially blow out. With the Aladdin Bi-Flex you get everything you need so you don’t have to buy anything else. 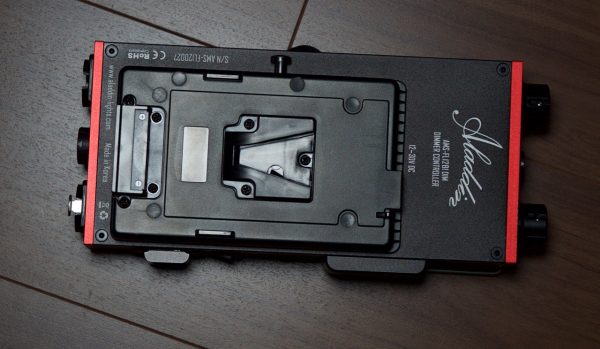 The Aladdin Bi-Flex comes with a nice anodized controller box that has a integrated v-lock (or Anton Bauer) battery plate. I really like this idea as you don’t need two seperate power supplies if you want to run the light off mains or a camera battery. The controller box has a on/off switch, DMX adjustment and two dials to adjust the colour temperature and the lights output. The connections for the cables are really nice, you just push the cable in and give it a slight turn and it locks in place. The light can be dimmed from 100-0% and has a 140 degree beam angle. It also draws 100 Watts of power, which means it can be run off most regular camera batteries at full power. 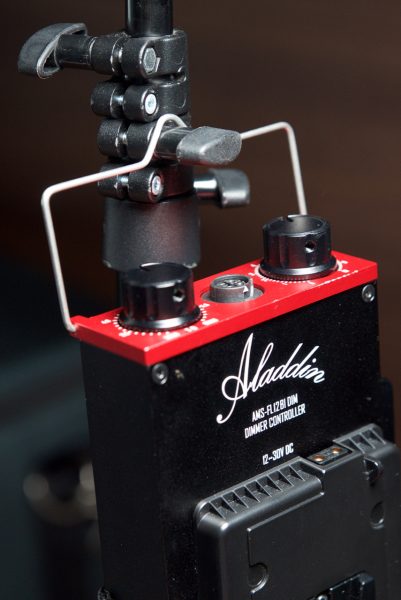 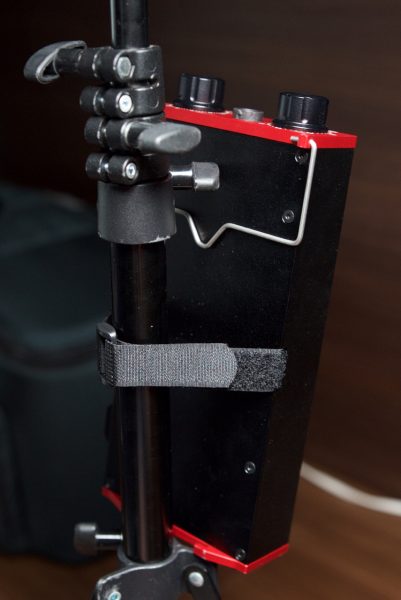 Not only is the controller box really well made but Aladdin have put a lot of thought into how to mount it on just about anything. On top of the box there is a nice fold out bracket that fits nicely over the top of light stand latches. On the back of the unit is a integrated velcro strap that you can use to attach the controller to a variety of items. A lot of other lighting systems don’t give you any solution for attaching the the dimmer or controller box to a light stand. It is all these little touches that really do make a big difference when your using the light. 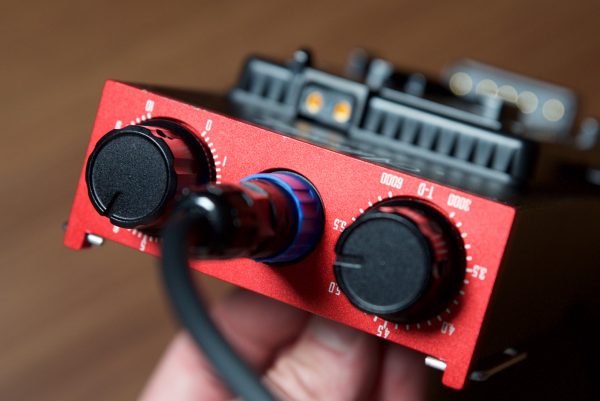 Another smart addition is the inclusion of a 5m (16.4ft) long cable that runs between the light and the controller box. This is clever as it allows you to mount the light on say a roof or put the fixture up very high without having to place the controller box with it. This also allows you to make adjustments to the light from ground level instead of having to climb up on a table or chair. 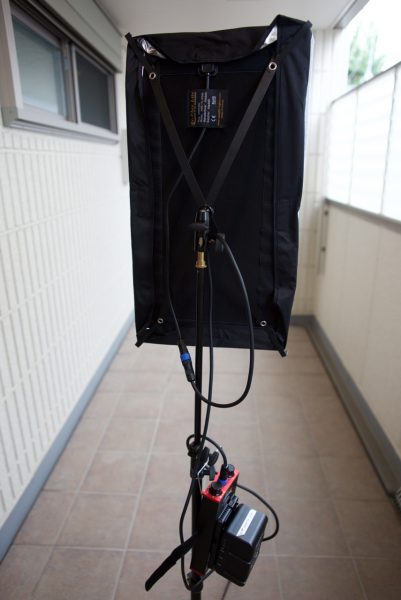 With the Bi-Flex’s low weight you can mount the light just about anywhere or attach it to just about anything. The light comes with a x-band bracket for mounting to a traditional light stand. The x-band attaches to a swivel ball head that has a number of accessories that go with it to make it very versatile. The ball mount can go straight over a light stand mount or it has a removable 1/4 20 and 3/8 insert for screwing onto a light stand or boom pole etc. They also give you an extension piece with a female 1/4 20 and 3/8 so you can screw it onto unearthing you like. There is also a cold shoe attachment if you need to mount it directly to a camera or other piece of equipment. They really have thought about every scenario in detail. 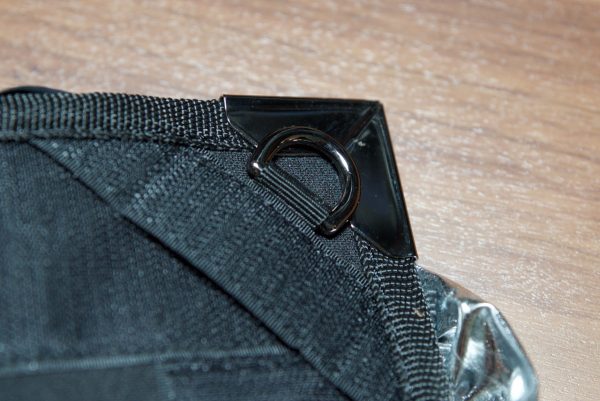 If you don’t want to mount it to a light stand or use the x-band frame, the Bi-Flex has velcro all the way around it as well as some large eyelets if you wanted to hang it up somewhere using rope. It also comes with a nice diffusion panel for softening the light. Optional extras also available include a ball modifier, magnetic mount and soft box attachments.

The two things I really like about the 2×1 is that you can mount it vertically or horizontally depending on your needs. This is very handy if you’re shooting a subject who may be standing up and you want to create even illumination. The other benefit of it being flexible is that you can bend it or shape it in any direction you want. I have used it a few times where I have virtually bent it it half so the light is illuminating two different directions. This is really handy if you’re doing a two person sit down interview as you can key light two subjects using the one light.

There is a lot to like about the Aladdin Bi-Flex. The fixture produces a really nice soft source that is extremely colour accurate. When you couple this with its lightweight and versatile design, as well as it being mains or battery powered it’s hard to think of a better solution for people who need a very portable, yet still quite powerful lighting source. The more I use the light, the more I like it. It is so convenient when you need to travel but have limited space for taking light fixtures.

While there is still a place for traditional LED lights, the future of flexible lighting fixtures is looking very bright indeed.

The Aladdin Bi-Flex retails for around $2000 US depending on where you buy it.