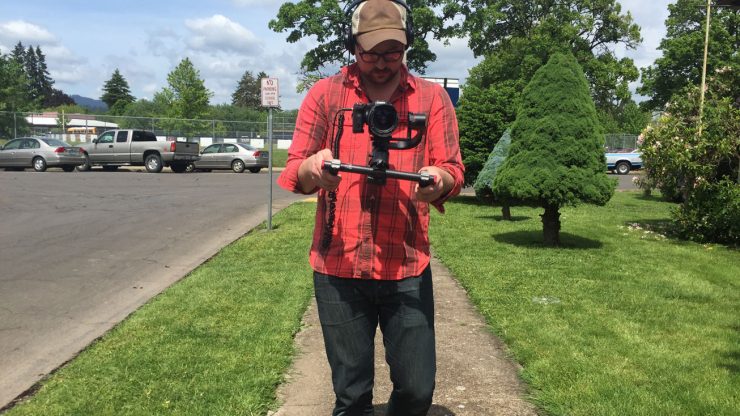 I’ve been taking the Pilotfly H2 around on various shoots, including one in Alaska, and right off the bat it’s really nice to have such a small, lightweight gimbal package to never leave at home. I haven’t spent much time with one-handed gimbals (what do you do with the other hand?), but it does make for quick and easy shooting from inside a car. Also by flipping the gimbal so the camera is nearly hitting the the ground (but still right-side up), it’s quite easy to do low shots while walking, riding a bike, from the side of a boat, etc.

The two-handed accessory is a must for H2 owners, and makes this a very versatile gimbal. It takes only a few seconds to switch between one or two handles. The H2 motors are quite powerful, and with the 360 degree rotation, you can orient the gimbal and camera just about any way you please, with the camera sitting above or below the gimbal. You can also point the gimbal straight up or down, or even have it rotate completely around, and the gimbal motors won’t shake or go haywire. The encoders also make it so if your horizon is off, you can just hold the camera in the correct position for a couple seconds and the gimbal will reset its horizon. For the two-handed accessory, you do need to provide your own charger for the Li-ion batteries.

The H2’s camera payload is nearly five pounds, so out of curiosity I did balance a Canon C100 with a 10-18mm lens on it. Technically it did work, but only within a narrow window of movement. The camera is too big for the H2 and its weight pushed the motors to their limits. Instead, I’ve been using the Canon XC10 on it which fits perfectly. I also put a Raynox wideangle adapter on the XC10, which makes the camera’s field of view a little more gimbal-friendly, though it also adds sun flares, edge distortion and weight. The XC10’s rear LCD screen makes it easy to see without using an external monitor, but for cameras with LCD screens that flip out to the left or right, the H2 can be reconfigured so that the motors sit opposite the flipped out LCD screen, which is quite a useful feature.

The Pilotfly H2 and Canon XC10 combo is a real treat for simple walk and talk shots, which could be especially interesting to journalists or news shooters who want to add a little flair to their stand-ups. With a wireless mic receiver attached to the back of the Pilotfly (using tape or velcro, nothing complicated), and with the H2 set to “Mode 3” (there are five modes total), the gimbal locks both pan and tilt motion, creating an incredibly easy straight moving shot either forward or backward, or a jib-like up and down shot.

In summary, the pros of this gimbal are that it’s quite simple to set up, use and travel with, the batteries last a very long time, the gimbal modes are useful (especially mode 3), and the motors are powerful enough to avoid spinning or vibrating out of control. The cons are that its build quality is nowhere near as good as the more robust, heavier gimbals like the Letus Helix Jr or DJI Ronin M, so you want to be careful with wet or dusty environments (for example, the two-handed accessory has an exposed wire plug that is precarious and has disconnected a few times, so I’ve taped mine over). Also when not in use, both the single handle and two-handle accessory have an exposed circuit board where it attaches to the gimbal, so you’ll want to cover it up somehow (a rear Canon lens cap works in a pinch).

It’s also a little cheaper than the competition at 1050.00€ ($1165US), so if you’re in the market for a budget-friendly, well-performing gimbal for a smaller camera and don’t mind a few rough edges, it’s well worth a look.