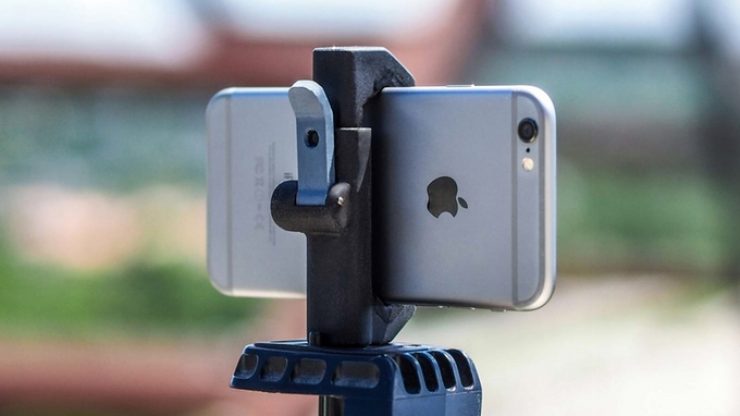 UPDATE: Already funded! With 30 days to go Studio Neat are funded to the tune of $67,000 US, substantially more than their target of $50,000 which hopefully will mean the New Glif is a roaring success.

Somehow it’s six years since Studio Neat launched the original Glif on Kickstarter: a simple way to add a tripod thread and stand to an iPhone 4. It was elegantly engineered and a useful gizmo to have in your bag or pocket to add a bit of stability to a smartphone that was probably only ever going to be used as a backup to a bigger camera.

As smartphones become ever more capable, and with the explosion of platforms like Facebook Live and Periscope, Studio Neat have decided that it’s time to reinvent the Glif, making it more compatible with the multitude of devices out there, and more functional to boot.

The New Glif features an integrated quick release locking clip to hold your smartphone securely and will accommodate devices from 58mm to 99mm wide, in both portrait and landscape modes (yes, sadly vertical video is A Thing now).

It also has three tripod mounts, making it possible to add a handle (they’re offering a cherry wood one as part of the Kickstarter) and two other threaded accessories to build out a simple, effective kit that would work well for mobile video journalism. There’s also an optional wrist strap that’s been tested while ‘zip-lining in the jungles of Jamaica.’ Fancy.

Kickstarters come and go and some of them don’t make it – Studio Neat have successfully funded five projects so far and although that’s no guarantee of success it’s a pretty solid track record. Still, be aware that pledging money isn’t necessarily a guarantee you’ll get what you signed up for.

Having said that we’ll be keeping an eye on the New Glif campaign and hope to be able to try one out if and when the project gets funded. If you’re thinking about pitching in, Studio Neat are looking to raise $50,000 US by 20 August. Check out their project page here.