At NAB 2016 I caught up with Kevin Baxter of VideoLights.com to look at the new range of SoftPanels LED lights which we previously featured on Newsshooter. The panels are soft lights with Autocolor automatic color temperature adjustment. A meter built into each lighting fixture reads the ambient color temperature mix and tunes the output to match. In addition there is a skin tone enhance feature that gives them a warmer feel at the push of a button. The company is also hoping that these two features can set them apart from other LED fixtures.

The Softpanels have variable colour adjustment from 2700K to 6500K, 0 to 100% dimming, and a claimed 95 CRI using high colour fidelity LEDs. According to Softpanels the output can be dimmed from 100% to zero with no color shift – something that almost all inexpensive lights struggle to do. The company also say the light are flicker free and run silently. 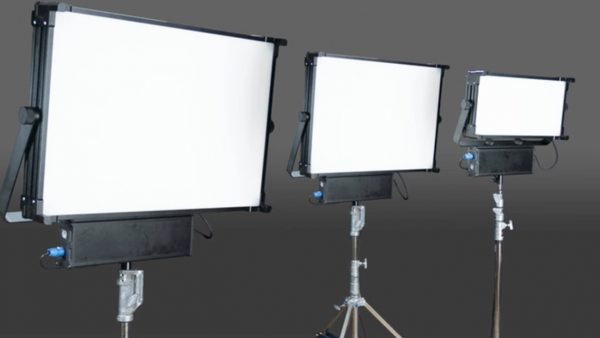 The lights looked to be very solidly constructed and provided a nice soft light source. My only concern was that they were quite heavy and may not be suitable for shooters who do a lot of travel. On the positive side the lights are very affordable considering their size, feature set and output.

The 1x2ft is listed at $1199 US and the first of the three models is expected to start shipping in around 5 weeks time. The lights were originally launched on Kickstarter and are still available for the next few days to early backers for a discount. Although a pledge on Kickstarter does not guarantee that you will receive the finished product, in this case the creators of Softpanels have a great track record and this is highly reassuring.