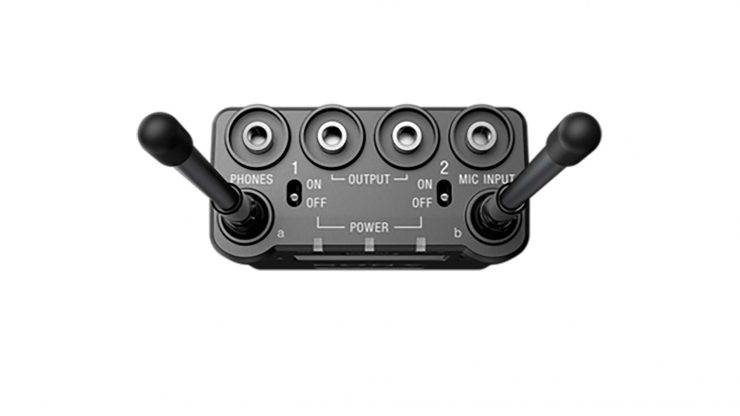 At NAB, Sony announced a new dual channel radio mic receiver in the compact UWP-D series. For the first time, they have put two channels into a really small housing. This form factor is an ideal candidate for DSLR and small camcorder use – until now, most dual channel receivers have been bigger. Traditional dual channel receivers require external power and a camera with a wireless mic slot, or a special adapter.

The URX-P03D can receive signals from two UWP-D transmitters, or older UWP and WL-800 series models (provided they are in the correct frequency range). In addition, it can also accept an additional wired mic input which can be down-mixed into the other two channels. There are three audio outputs: two mic outputs (one for each channel) and a headphone jack for monitoring.

If that weren’t enough, you can also connect the URX-P03D directly to most MI shoe equipped cameras like the PXW-X, RX10, a7 and a6000 series, as well as the FS7 and FS5 (to do this you will need the optional SMAD-P3D adapter). This means that for the first time you can have a dual wireless setup without any dangling cables at the camera end. With some camera models the URX-PO3D can even receive power directly from the camera. If you have the older SMAD-P3 (without the D on the end) then sadly you will need to get the new model for this to work.

The URX-P03D has a true diversity reception system meaning that when used as a single channel receiver it uses both antenna and receiving circuits. These two RF signals are then compared and the stronger signal is chosen automatically for the output.

I spoke to Sony and it isn’t clear yet how the levels on the URX-P03D will work with the various Alpha cameras. How you set the individual channels may depend on the camera you attach it to. I assume that with the a7, RX10 and a6000 series the levels and mixing will need to be set on the URX-P03D itself and not via the camera’s menu, but we don’t know for sure.

If this receiver sounds good and works well it could rapidly become commonplace in the kit bags of many news shooters and documentary makers. As ever, we are eager to test it out.

Pricing and availability has not been announced for the URX-P03D, but I expect it to be aggressively priced compared to rivals like Lectrosonics and Sennheiser.