Fujifilm North America have just announced that they will introduce the Super35 Fujinon Premier PL 20-120mm Cabrio XK (XK6x20) zoom at NAB in Las Vegas in a few weeks time. The new lens features a constant T3.5 aperture through out the entire zoom range and like other Cabrio lenses comes with a detachable servo drive unit similar to those seen on ENG lenses. It also has a 200 degree focus rotation, 9 iris blades and a minimum focus distance of 1.1 m (3′ 7″).

The 20-120mm weighs in at 2.9kg (6.39lb), 2.4 kg without the servo drive unit. We have some hands on with it at Newsshooter, but not been able to shoot or test it as of yet. For now you can check out the photos we took that show its size and handling. 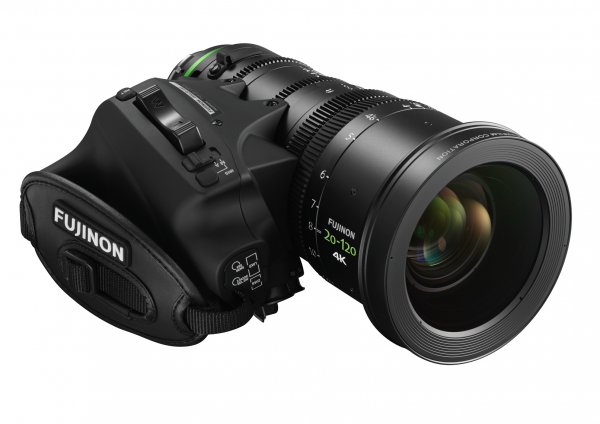 Fujinon are aiming the lens squarely at the growing number of owner/operators who are making the transition from ENG 2/3″ sensor based cameras to Super 35mm digital cinema cameras such as the Sony F5/55, Canon C300 Mark II, Panasonic Varicam LT and the ARRI Amira. With a lot of broadcast television series making the move to digital cinema cameras there has been a growing need for ENG style Super 35mm lenses that feel more familiar to operators making the transition and are quick to operate.

While Fujinon will probably not admit it, the Premier PL 20-120mm Cabrio is definitely being targeted as a direct competitor to the Canon CN7x17 KAS S Cine-Servo 17-120mm T2.95 lens. The CN7x17 has proven to be a very popular lens given its focal range, 180 degree focus rotation and ENG style handling.

If we compare the two lenses head to head, the Canon is slightly wider, has a faster aperture (although it does ramp at the longer end of the range) and weighs the same as the 20-120mm Cabrio. The Canon retails for around the $30KUS mark, while the new 20-120mm Cabrio is going to retail for significantly cheaper. Newsshooter has learnt that the lens may be priced around the $15K US mark. If this pricing holds true the lens becomes a lot more likely to be purchased by owner/operators and so Fujinon are likely to sell as many units as they can make. Owners of cameras such as the FS7, FS5 and Blackmagic URSA Mini who may not of been able to afford a Canon CN7x17 may find this lens within their reach. It is interesting to see that the Sony FS7 is the camera being used with the 20-120mm lens in the Fujinon promotional video. Abelcine are saying that the retail price will be $18,200US, but expect the street price to be lower. Delivery is set to begin in June 2016.

In my opinion 20mm (in Super35) just isn’t wide enough for a lot of applications. For operaters shooting realty TV shows or documentaries, the Canon 17-120mm offers a better range. That 3 millimetres may not seem like a lot, but it makes a big difference when your trying to shoot in small locations. I’m sure third parties will make wide angle adapters, but these add bulk and cost.

Fujinon are not only competing against Canon, but the lens might also tempt buyers who would otherwise opt for the popular Cabrio 19-90mm T2.8 lens. I suspect we may end up seeing a discounting of the 19-90mm in the months after NAB. Just how the optical quality compares to the existing Cabrio range and the Canon CN7x17 is something we will have to wait and see. Newsshooter will be covering the lens extensively at NAB.

Duclos lenses are already taking pre-orders for the lens if you put down a $1000US deposit.

This from Fujinon:
“This Cabrio XK zoom delivers precise optics, a consistent T stop of T3.5 throughout the entire focal length range, and smooth servo operations in a compact package – making it ideal for both run & gun-style and cinema-style shoots,” said Thom Calabro, director of Marketing and Product Development for the Optical Division of FUJIFILM. “Remove the detachable servo drive, and it can easily accept industry-standard cine motors and matte boxes. Whether you’re from a film or video background, the PL 20-120mm Cabrio XK offers remarkable quality and unprecedented flexibility.”

The 20-120mm Cabrio XK covers a S35-sized sensor (Super 35 format) on a digital cinema-style camera. “While sensors on standard broadcast cameras are all the same size, sensors on digital cameras vary greatly,” Calabro explained. “This new zoom lens ensures that the image captured will cover large sensors on the most popular PL cameras.”

The 20-120mm Cabrio is also fitted with a nine-blade iris, to capture the most natural looking imagery possible. It comes equipped with all the lens data outputs that are required by today’s cine-style shooters. “LDS and /i Tech metadata compatibility are very useful when you need to record the position information of zoom, iris, and focus for computer animation and similar postproduction operations,” said Calabro. “The digital servo on this lens has 16-bit encoding, so operators can be assured that the lens data outputs are extremely accurate.” 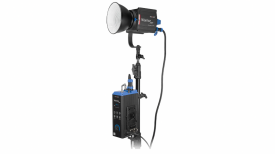 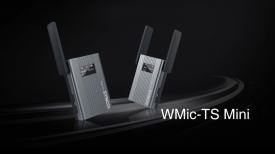