One of the things that has been missing on many of the recently released external recorders is XLR inputs. For smaller cameras that don’t feature proper audio inputs, there have been very few solutions available. The Atomos Shogun has an XLR breakout cable, but it is not without its limitations. The Convergent Design Odyssey series only has a 3.5mm mini jack for audio input. Video Devices has set out to change this and they have just started shipping their PIX-LR audio interface for the PIX-E Series of recording monitors. The PIX-LR is an optional accessory that adds XLR inputs and outputs to the PIX-E5, PIX-E5H, and PIX-E7 monitors. The accessory also incorporates Sound Devices-designed mic preamps, accurate LED metering, and dedicated transport and gain controls.

The PIX-LR mounts to the bottom of any PIX-E Series monitor via a ¼-inch 20 thread screw. It is constructed from die-cast aluminium and draws power from the monitor it is attached to. It also offers two dedicated gain controls and illuminated, 23-segment LED metering. Other features include two low-noise, wide-gain XLR-3F connections for active-balanced, analog mic-level inputs (1 and 2), and two standard, three-pin XLR-3M connections for balanced, analog outputs. 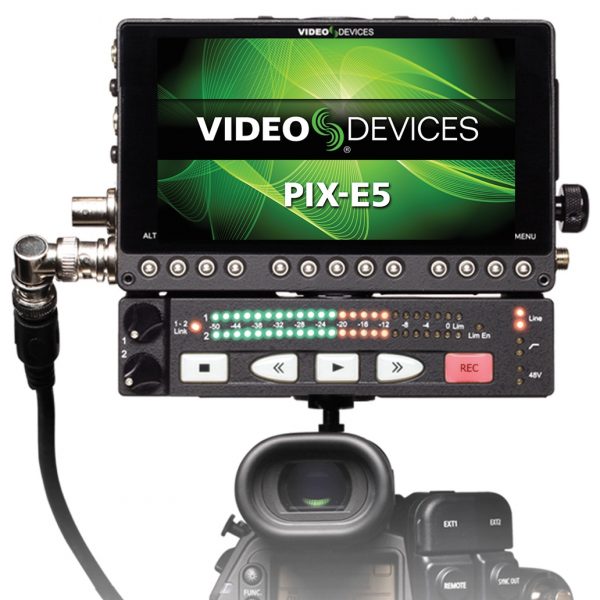 There are large dedicated backlit transport controls for record, stop, play, fast forward and rewind. PIX-LR also comes equipped with high-quality limiters with LED indication to prevent distortion, as well as high-pass filters for reducing unwanted low frequencies such as wind noise. Additionally, for fast level control, the PIX-LR has dedicated gain controls, which may be recessed when not in use. Inputs 1 and 2 may be linked for stereo level and pan control. The audio interface also supports 48V phantom power for condenser mics.

Size-wise the PIX-LR does look more at home on the PIX-E5 and PIX-E5H than it does on the PIX-E7. What I do like about the accessory though is that you have nice big illuminated LED level indicators right in front of you that aren’t taking up valuable real estate on the screen.

This is not the first time Video Devices/Sound Devices has added professional audio capture to one of its external recorders. I still use the old Sound Devices PIX 240, with cameras such as the Sony F35. It has built-in XLR audio inputs and outputs and allows me to record great audio and video from cameras that don’t have integrated XLR connections. 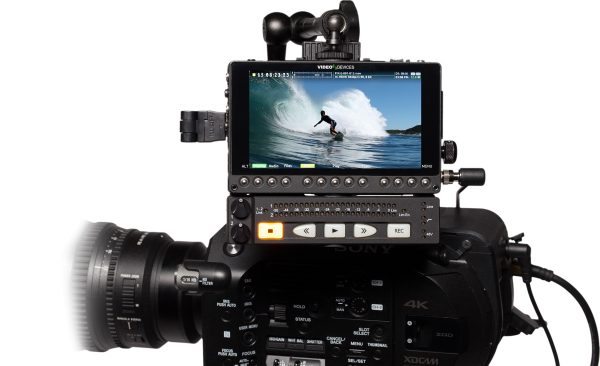 I think this is a great move from Sound Devices and it adds a key piece of functionality that has been missing from external recorders. If you happen to own a Sony a7 series, a6300 or RX10 camera you do have the ability to buy the Sony XLR-K2M XLR or XLR-K1M audio adapters, but for other cameras that don’t feature XLR inputs the solutions are limited (Panasonic has the YAGH brick for the GH4 but its a lump that needs external power). You could record sound separately or run your audio through a mixer and then into an external recorder, but to me this often defeats the purpose of using a small compact camera in the first place.

This from Sound Devices:
“The PIX-LR is a great way to bring our renowned Sound Devices audio integrity into our Video Devices products line,” says Paul Isaacs, Director of Product Management and Design, Sound Devices, LLC. “It’s just another testament to our customer-focused product development. The PIX-LR is a result of the hard work and dedication of our designers and engineers, and further proof of our commitment to providing the professional video industry with world-class audio.”

The PIX-LR will retail for $399 US. To use the PIX-LR you will have to download the latest (v2.00) firmware from the Video Devices website.