At the CP+ show in Japan I got to use and get a feel for the new 50-100mm F1.8 lens from Sigma. While the lens shown was still a prototype and not a production version, the first thing that strikes you is the build quality. While it feels as solid as the 18-35mm F1.8, the operation of both the focus and zoom barrels seemed to be better. I found that both the zoom and focus barrels were a pleasure to use and they offered a nice amount of friction. Both barrels were nice and big so you don’t have to go searching for them when you’re shooting.

The lens is quite large and heavy at 1,490g / 52.6oz, but at no time did it feel too heavy when I was using it. The 50-100 features 21 elements in 15 groups, so there’s a lot of glass inside. The internal parts are made out of metal and Thermally Stable Composite (TSC). TSC offers thermal expansion characteristics similar to those of aluminium, and parts made with TSC deform less over time. The mount is made of brass and when I attached the lens to Canon, Blackmagic and Sony cameras there was no lens wobble.

The new lens features inner focus and inner zoom, so when you adjust the focus and zoom rings the length of the lens does not change. The 50-100 is also par-focal which is good news for video shooters. The lens does breathe when you change the focus, but it is minimal, and well controlled for a photographic stills lens. The breathing is comparable to the 18-35mm. 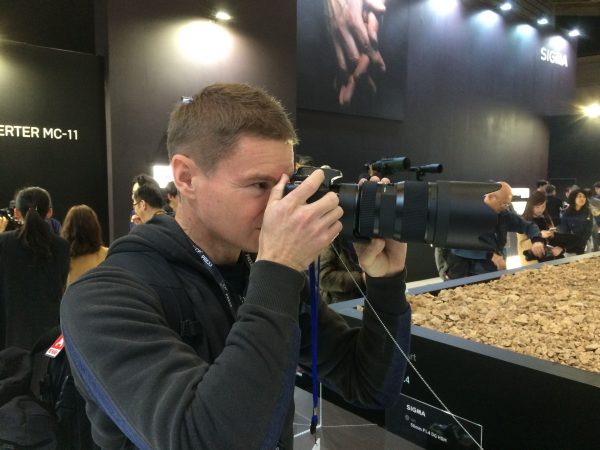 The lens was easy to use in both manual and automatic focus settings. Just like the 18-35mm it is nice to be able to take over control of the lens and manually focus even when in the autofocus mode. What was especially nice to see was how well the lens focused when you combined it with the new MC-11 Canon EF to Sony E-mount adapter. I tried the lens and adapter on a Sony a7R Mark II and the autofocus performance was very fast and accurate. If you’re planning on using the Sigma 50-100mm EF mount on an E-mount camera, then the MC-11 would make a good addition. 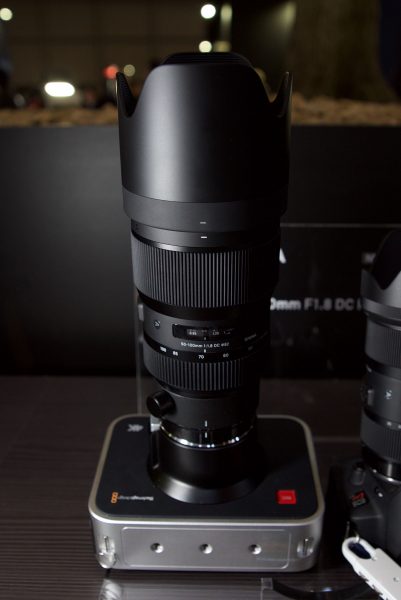 Quality wise it is always hard to judge a pre-production lens, but from what I saw it was nice and sharp and had pleasant bokeh. It did seem to exhibit quite a bit of flare when pointed directly at light sources, but this may not be present in the production version. Sigma told me that while they were designing the lens they did a lot of photographic experiments to assess flare and ghosting under various conditions. The new lens is using SIGMA’s Super Multi-Layer Coating which is claimed to further reduce flare and ghosting and provide sharp, high-contrast images even in backlit conditions. I didn’t see any noticeable chromatic aberration even when the lens was wide open at 1.8. 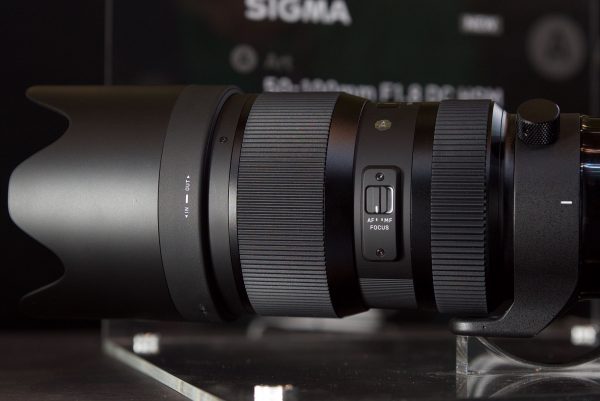 Another nice feature of the lens was the tripod collar. It has 90-degree click stops and smooth switching between the horizontal and vertical position, which allows you to move it quickly and accurately without having to line up two dots.

The 50-100mm F1.8 DC HSM Art looks to be a very impressive lens. I could not fault the build quality and operation of the lens and even though this was still a pre-production unit the image quality is sure to impress most shooters. If you’re using the lens for video work and are already familiar with the 18-35mm F1.8, you will be right at home with the 50-100mm. Sigma have come a long way in recent years and they’re designing some very impressive lenses that are well suited for both photography and video applications. Hopefully there is a longer tele photo lens in the pipeline.

Newsshooter will have a full review once a production version becomes available.