I wrote a blog post about the shoot back in 2013 . This film has been a great success, well received by the public and the fans.

With the Highlands film we wanted to appeal to the purists. We did not want to make the same film again. We made a conscious decision to hold the shots longer, and to not cut around the drifting with fast edits. 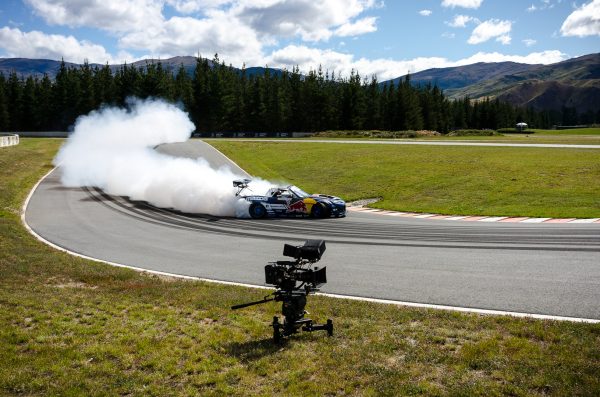 To achieve this, Ryan and I worked closely with Mike during the pre-production phase. We spent time on the track with Mike, walking the lines, talking about what was important to capture, and where the shots would begin and end. We had one day to film the clip, and we could only drive the car on the track between 8am and 6pm, so we needed to be fully prepared.

To achieve this tight schedule Ryan and I broke down the sections with the team and we shot only what we needed. It was a big day, but we had a great crew around us who were focused on making it happen.

Below you can see a terrific behind-the-scenes video from Andy Deere and Heath Patterson.

I always like to work with at least two cameras when filming cars. It allows me to be shooting one camera while my team is prepping the next setup. On a shoot like this where there are literally ‘not enough hours in the day’ it makes all the difference.

On this shoot I used my two Red Dragons. One was in Movi mode, and the second one was in production mode. The production camera was also used as the rigging camera inside the cockpit and the helmet for the introduction shot.

I also had a Phantom Flex 4K and this was used selectively on the shoot day as we did not want to take away from the speed of the driving. We had a helicopter for a couple of hours and Peter Thompson took care of the aerial shots with his Shotover F1.

We really wanted to place the viewer inside the car with Mike. His driving is very physical, and reads really well on camera. Fortunately, his car is a convertible with a roll cage. This cage made it really easy for my grips to quickly rig a Dragon right in beside him. I was really proud that we got a Dragon rigged in there. Not to detract from smaller action cameras, they do have a place, but I can really see the difference in quality, and I think that cutting between formats on a clip like this can really pull the viewer out of the moment.

I like to use tracking vehicles extensively. It allows me to hold a shot for longer, and to develop the shot as I adjust the position of the car in frame relative to the lens and the tracking vehicle.

Sam Strain was my precision driver. He is a very experienced driver and Grip for TV commercials. We have worked together for years and I can count on Sam to get the camera car where I need it to be accurately and safely. We had several tracking vehicle options available to us. We chose to go with Sam’s Subaru WRX with a post and beam rig. I am a huge fan of this car. It is very fast, and low to the ground. It is also small, and allows Sam to position it accurately on the track. This was really important as Mike and Sam would discuss every corner before we shot it and they both had to be aware of each others’ vehicles as we were tracking at high speeds and the cars were often very close. One of the great things about this vehicle is that it is very quick to swap between the front and rear camera mount.

I had limited options available for the stabilized head, so I used my Movi M15. We needed the Movi to punch well above its weight on this shoot with the high speeds involved and strong G-forces. A lot of the tracking was at 100kph, and we were cornering hard. The head was prepared by my Movi Grip Josh Dunn, and he used a custom-made isolator mount.

Colour grading was handled by Pete Richie in Auckland. I didn’t attend the grade, but have worked with Pete many times and he always makes my images look terrific.

I am very happy that we managed to keep the quality high. It’s a testament to the talented crew behind the scenes and the reaction to this film by the fans has been great!

Ben Ruffell is a Director of Photography. He lives in Queenstown, New Zealand and travels throughout the world filming commercials.

He has extensive experience with tracking vehicles, rig’s and helicopter’s.
He operate’s the Shotover Camera System, Russian Arm, Scorpio Arm, Libra, MoVI. He is also a Gimbal Operator for Drones, and a Skiing Cameraman.

He is a Full Member of the New Zealand Cinematographers Society. NZCS.

Ben won both a Gold and a Bronze at the inaugural NZCS Awards in 2016.