Unless you’re a keen anamorphic lens adapter user then you probably haven’t heard of the British designed Rectilux. In some circles though they have been gaining quite a reputation. Like many other factual shooters I’m in love with the anamorphic look but haven’t found a way to work with the complexities that it involves. True anamorphic cine lenses like Cookes, Hawks or Zeiss Master Anamorphics aren’t an option for me given their astronomical cost. I’ve tried, tested and owned vintage adapters from ISCO and Kowa, as well as more modern ones from SLR Magic and Letus. While I love what they do, I haven’t really found a way to incorporate them into my work.

Rectilux recently sent me one of their 3FF-W adapters on a vintage Schneider Optics Cinelux ES 2x anamorphic projection lens to test out. The 3FF-W actually encases the vintage anamorphic lens and the duo is then mounted onto the front of your regular lens to anamorphise it.

The main lens needs to be around 45mm on a 16×9 Super35 sensor, or 70mm on a full-frame one (this can vary slightly depending on the base anamorphic lens you use). The Rectilux uses a clever diopter system to turn the whole combination into a single focus device – I’ll explain this in more detail in a moment. I duly attached it to several different lenses and set about shooting.

I settled on an old and cheap Helios 58mm f2 for my test. This is about the shortest focal length you can use in S35 with the adapter (when cropping off the edges) to give a near 2.35:1 image – more on this also in a moment. The fast aperture and older optics produce a retro look and bokeh that I am quite enamoured of. Overall the optics of the combination are physically quite large, but not unmanageable even when handheld.

Traditionally the problem with anamorphic lens adapters is that they require you to focus two optics – the anamorphic adapter itself and the main taking lens it’s attached to. In the past there have also been several systems that only require you to focus only once – starting way back in the 1950s from British company Taylor Rank Hobson. Probably the best known are the vintage ISCO adapters that have a clever mechanism which allows focus to be done just using the adapter’s focus ring, while leaving the taking lens set at infinity. As a result these adapters have achieved something of a cult status and become rather expensive.

Rectilux have pioneered a novel solution for this. By taking an anamorphic lens and adding a focussing diopter adapter on the front you can turn many common anamorphic lenses into single focus optics. Like the ISCO you set both main lens and adapter at infinity, then focus using the ring on the adapter to focus using the diopter. It sounds complex but in practice it works really well.

If this method sounds familiar then its because the similar principal used by a couple of other manufacturers, including SLR Magic (Rectilux claim they were the first to come up with the idea). I tested the SLR Magic Rangefinder focussing diopter and anamorphic combination a few months ago and found it to be very good provided you stop your main lens down a little to between f2.8 and f4.

I was very surprised therefore to discover that the Rectilux with the Schneider anamorphic was sharp in the centre of the frame at much wider apertures. In fact you can go wide open on several of the lenses I tried and it is still sharp. I went as far as f2, but other tests online show it working at f1.2 (check out the video below by Tito Ferradans who used Canon f1.2 primes with a Kowa anamorphic and the Rectilux). Wide open the corners of the frame are a little softer and, depending on which lens you couple it with, have a slight blurring effect that is not unattractive to me. This is likely due to the Schneider lens and not the diopter, but if you want a sharp image across then frame then you can of course stop down a little.

Because the Rectilux 3FF-W / Schneider combination I tested is a 2x anamorphic it gives the wonderful stretched out of focus areas that anamorphics are known for. This should ideally be mated with a camera capable of shooting video in the 4:3 aspect sensor ratio like the ARRI Alexa and Panasonic GH4, or 6:5 ratio on the Blackmagic Design URSA Mini, to give a result that can easily be turned into a 2.35:1 or 2.39:1 aspect video in post. When used with a regular 16×9 sensor the resulting image will be even more letterbox and needs to be cropped significantly at the sides in order bring it back to 2.35:1 in post. This is exactly what I chose to do because I was shooting on a Sony a7R II.

My test video above is shot this way. It was all filmed on 4K in 16×9 and then cropped in post and finished in HD. This works well enough if you don’t need a higher resolution horizontally, but one downside is that this makes framing much harder using the viewfinder – ideally an appropriately marked out monitor that displays anamorphic image correctly squeezed is what you need.

Personally I’m less interested in flares as I am the stretch effect, and so am pretty happy with the 3FF-W/Schneider combination.

Another thing to note is that conventional anamorphic adapters have had a very limited close focus ability. Many have a minimum focus distance in excess of 1m and require additional close-up lenses to get any nearer. The 3FF-W diopter allows much closer focus of around 0.6m and this makes real world shooting so much easier.

For the video I decided to try shooting completely handheld in a guerrilla style. This is something I would never do with a dual focus anamorphic. The weight on the setup was a little concerning so I made sure to support the lens well with my hands when walking around. Mounted to my a7R II it looked a little crazy, but didn’t stand out in the crowd much more than a large zoom lens. One thing I immediately discovered is that the rotating front of the adapter prevents the use of lens mounted variable neutral density filters. The only way to add ND is to use a fixed strength one instead. You can use a mattebox, or there is a 95mm front thread on the 3FF-W. Sadly I didn’t have a large enough screw-in ND filter so I gaffer taped a 4×4 ND filter onto front of the adapter instead. This worked well enough and off I went. You could of course use a camera with built-in ND instead to make your life easier.

Focussing the combination wasn’t too hard at all. I found the easiest thing to do was to set the taking lens to infinity and then gaffer it up to prevent accidental movement. The focus on the 3FF-W was fairly smooth. There is a large scalloped part at the front that can be held onto. You can also add an optional focus gear to the 3FF-W that allows the use of follow focus. I found this gear also helped give me better precision when focussing by hand as it gives a better feel. 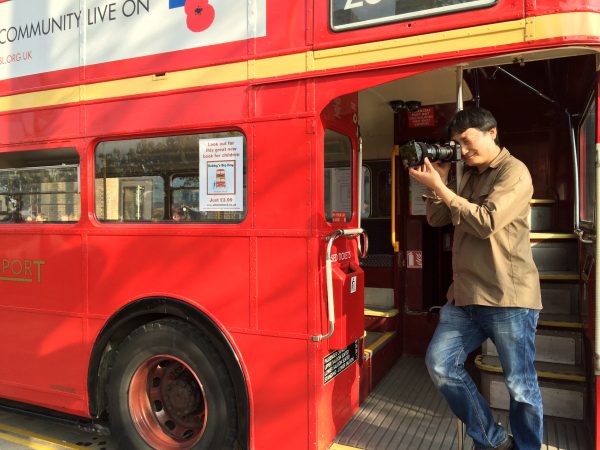 To keep a low profile I didn’t use an external monitor or EVF for the shoot which made composition and focus trickier. On the camera’s EVF or screen you are always looking at an elongated image and if I were to shoot in a more controlled environment I would immediately opt for an external monitor with an anamorphic squeeze option.

I think the results are pretty interesting and the look is certainly very different to shooting regular lenses. For the right subject I think it really adds something. The sharpness of the 3FF-W/Schneider combination is very good and is better in the corners than other inexpensive anamorphic combinations I’ve tried. I’m going to play around with the Rectilux with more expensive lenses to see if I can get an even better result. The adapter can also be paired with zoom lenses, which is something I haven’t tried yet but am interested to test. Anamorphic cine zooms are hideously expensive so if the Rectilux can come anywhere close it would be great.

The only slight downsides of the 3FF-W for real world shooting are the size and weight of the optic, plus the inability to match it with wider lenses. The latter is something the 3FF-W shares with all other anamorphic adapters, but I believe Rectilux have an innovative solution in the works. The recent photo below was posted on their Facebook page and shows a prototype of a new wide angle model.

There is also another focussing diopter solution from Rectilux called the Core DNA that is easier to fit than the 3FF-W. This is a lightweight screw-on front mounted variable diopter adapter that works in the same way as the 3FF-W, but with non-rotating optics. It also has a front filter thread to allow easy mounting of filters. The only trade off is that you can’t focus quite as close (0.7m vs. 0.6m). The Core DNA should be available any time now.

One thing to bear in mind is that the Rectilux adapters rely on the supply of high quality anamorphic lenses on the used market. For now there seems to be no issue with supply, but if popularity increases then this might change. I suggest anyone who is seriously thinking out getting one of these setups buys into it now.

In the time I’ve had the Rectilux I’ve fallen in love with it. So much so that when it came time to send it back I opted to buy it instead.

The 3FFW adapter is priced at £595, plus £95 for adapter ring sets to mount it to your lens. You need to supply your own anamorphic lens. You can find out more about the Rectilux from their website.