There are plenty of wireless follow focus units on the market, of varying quality and price. One of the new players is Movcam, with their Wireless Lens Control System. We first saw a prototype of a full FIZ (focus, iris, zoom) wireless system back at NAB 2014 and then at NAB 2015 we saw a prototype of their single channel unit. 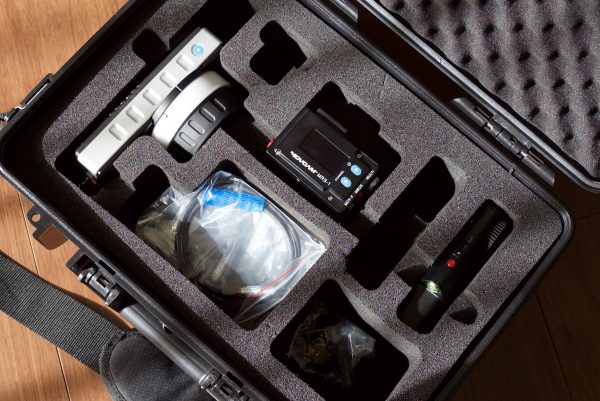 The Movcam system consists of a single axis hand controller unit, receiver box module, and a motor. The kit comes in its own hard case with custom laser-cut foam. There are also two mounts that allow you to place the motor or receiver unit on 15 or 19mm rods. Also included is a strap for the hand controller, a motor cable and a power cable. The nice thing about the Movcam system is that you get everything you need to get up and running, except for a Sony NP-FS70/FS50 type battery that powers the hand controller. 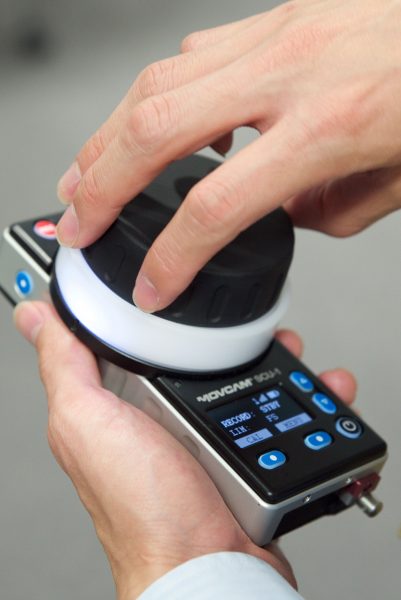 The hand control unit works on the 2.4 GHz frequency and there are nine channels to choose from. There’s a bright 1.54″ OLED screen that is easy to see during in bright sunlight. All the menu settings are on the OLED screen and can be changed via some simple controls. Movcam claim the system has a transmission delay from the hand controller to the receiver of less than 12 milliseconds. The indoor transmission distance is a claimed 30m (98ft) and outdoors it is 200m (656ft). The power consumption is 190mA, 7.2V, which means you should be able to power the hand controller for around 17 hours on a single Sony battery. There is also a mini-SD card slot for loading firmware updates and lens data. The unit I tested did not have the ability to load up lens data, but according to Movcam it will be coming soon. 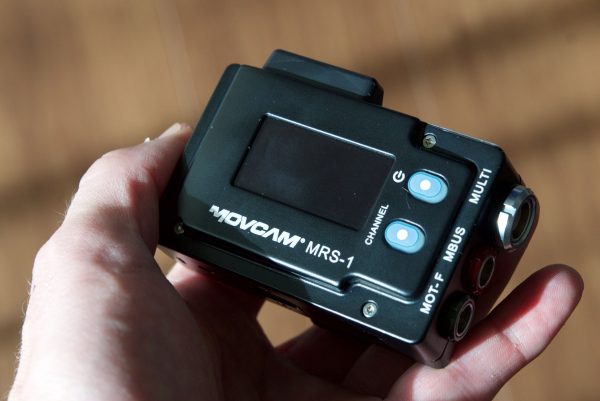 The receiver box module can be mounted on either 15 or 19mm rods, and it can be powered and receive start/stop control input from the following cameras by swapping out different optional cables: Arri Alexa, Alexa Mini, Amira, Sony F5/55, Sony FS700, Sony FS7, RED EPIC, RED SCARLET, CANON C100/300/500 and Blackmagic BMCC and BMPCC. Just like the hand controller the receiver box has a 0.48″ OLED screen and draws under 2A of power. There are no external aerials sticking out of the box and it is very small and compact, weighing in at just 175g (6.17Oz). 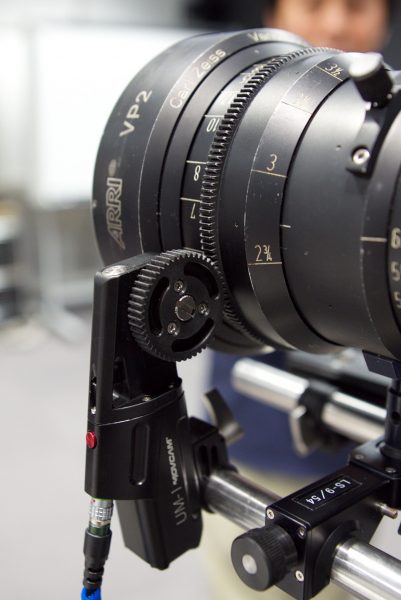 The UM-1 motor can be adjusted to change the amount of torque it provides. There are four different torque settings to choose from depending on what type of lens you are using it with. This is an important feature as using motors with too much torque can damage smaller lenses, such as cine-modded stills glass. Movcam claim the motor is very quiet and uses a precision speed reduction mechanism to ensure smooth operation. Another nice feature of the motor is that you can press a button to change the direction. To automatically calibrate the motor to your lens you press and hold the same button for three seconds. Movcam make different sizes of lens gears as optional extras.

The nice thing about the Movcam system is that you can upgrade it to a full focus, iris and zoom (FIZ) control with the addition of extra modules. The zoom extension module attaches directly to the hand controller and features a sliding pressure sensor for you to control the speed of your zoom. The MD-1 and MD-Z motor drive modules can be added to the receiver and these correspond to iris and zoom. These can be stacked together on the receiver box module so you can add just zoom, iris, or a full FIZ set up depending on your requirements. I like the idea of being able to just buy what you need and upgrade if you want a more complex setup. 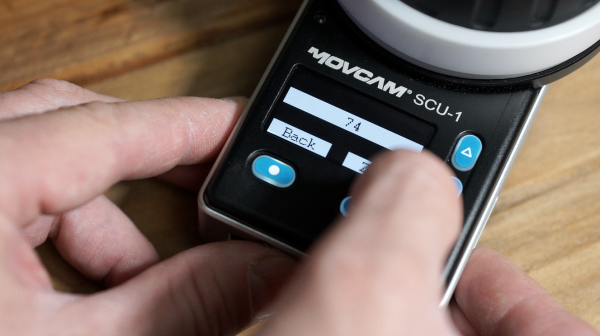 As far as functionality and features go the Movcam system has a lot to offer. Inside the menu you can change the RF channel, change settings and enable a 3D setup if you are using multiple devices and motors. You can adjust the torque of the motor as well as the speed of the control stick. The control stick can be adjusted anywhere from 1-100 and there is also a ZAP button that instantly puts the stick at full speed. You can then press the ZAP button again and the controller goes back to the speed you were previously using. When using the system with additional modules and motors you can assign which motor you want to control the focus, iris and zoom. There is also the ability to change control knob illumination level as well as the brightness of the OLED screen.

I mounted the system to my ARRI Amira and found it very easy to set up and use. My only real complaint was that I thought the mounting modules that attach onto 15 or 19mm rods could have been better made. You have to loosen them quite a lot to slide them over a rail and it is very easy to over-loosen the latch so the whole assembly comes apart. As far as the rest of the build quality goes I was very impressed. The whole system feels very solidly constructed and in no way cheap or plasticky. The motor is fairly quiet and has plenty of power to drive even the largest and heaviest cine zooms. I found the range both indoors and outdoors lived up to Movcam’s claimed figures. The response time was good and I couldn’t notice any real time lag between when I made an adjustment and the motor moved the lens.

I also tried out the system on cine-modded Zeiss ZF2 lenses to see how well it would work. By turning down the torque of the motor I was able to do nice, precise focus rotations without risking damage to the lens. A lot of other motors on the market do not have the ability to change the torque. The flexibility of the Movcam system makes it very easy to go from a small stills lens all the way up to a large PL mounted cine lens. 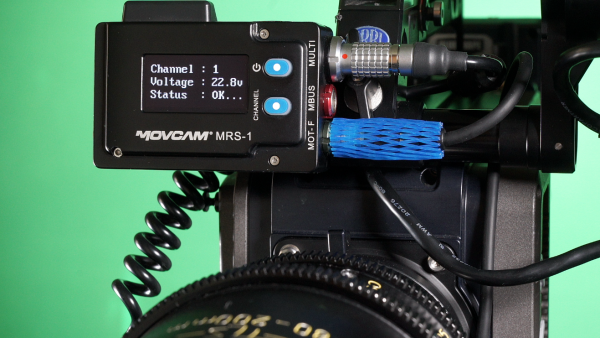 It was nice being able to mount the receiver box module straight onto the Amira’s VF support bar and to also power it off the camera; to do this you do need an optional cable. That same cable also allowed me to use the record button on the hand controller to start/stop trigger my Amira. The cable that comes with the kit allows you to power the receiver via a D-tap. The custom case for everything and neck strap for the hand control unit are nice extra touches. The menu system was straightforward and easy to use and allows you to make changes very quickly.

I was interested to see just how well the Movcam system stacked up to more expensive of focus units such as the Arri SXU-1. Unlike a professional focus puller I don’t use wireless follow focus units all the time, so to get a second opinion I took it into the engineers at NAC Image Technology who are not only one of the biggest rental houses in Tokyo, but are also the Japanese distributor for ARRI, Angeniuex and Zeiss.

We hooked the system up to another ARRI Amira and tried it with a variety of lenses, including an Arri Variable Prime VP2 T2.2 29-60mm and Arri Alura 15.5-45mm T2.8. We also had the Arri SXU-1, Arri WCU-4 and CLM-4 Lens Motor on hand so we could compare the two systems.

The engineers at NAC went over the Movcam system with a fine-tooth comb and gave me some honest feedback. It was the first time they had seen it and their overall impression was positive. They told me that they thought the system response time and wireless range was very good and on a par with ARRI. They also liked the build quality and said that the motor was actually quieter than the ARRI CLM-4, which surprised them. Based on the retail price, they thought that the Movcam system seemed to fit nicely between the ARRI and the cheaper Heden Carat Digital Follow Focus System. They also mentioned that the Movcam seemed to be better than the Heden, based on their experience.

They offered some suggestions on what they thought could be improved on the Movcam:

1. LOCK BUTTON- Having some sort of way to lock the buttons so once you have made your settings you can make sure you can’t bump a button and accidentally change anything.
2. STOP LATCH- Where you mount the 15/19mm rod adapter on the controller and receiver there should be a safety latch so it can’t slide all the way off easily.
3. WIDTH OF MOTOR GEARS- They suggested that different sizes including up to a 50mm wide gear should be available as certain cinema lenses and macro lenses focus barrels move backwards and forwards.
4. WIRELESS/CABLED INDICATOR ON THE SCREEN- An indicator on the screen that lets the user know when the unit is running wirelessly or in hard wired mode would be helpful.
5. MOTOR TORQUE- The torque of the motor seemed to vary slightly and wasn’t as consistent as the Arri CLM-4 Motor. 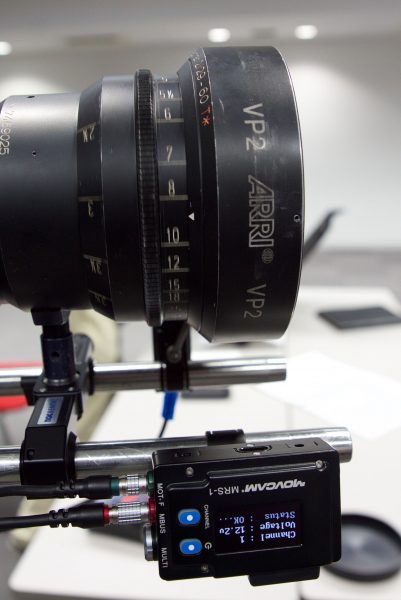 The single channel Movcam Wireless Lens Control System retails for $3900 US. It performs very well and even managed to give the more expensive Arri system a run for its money. While there is still room for improvement, the system is a good first offering from Movcam and provides a lot of performance and features in a compact, easy to use solution. The ability to add extra modules and motors down the track gives the end user flexibility in expanding their system as needed. The Movcam team are already working on improvements to the system and are still optimizing the drive system of the motor.

For more information on the Movcam system keep a look out on 16×9 or the Movcam website.