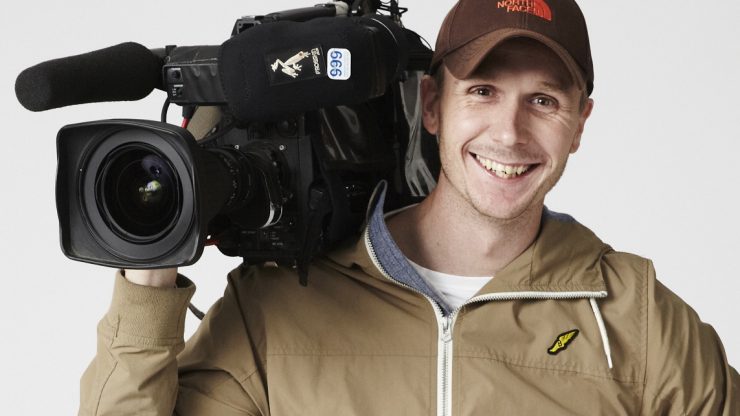 This is a guest post from news and documentary filmmaker Christian Parkinson. Christian has been in the game for over 15 years and has seen his work win a number of awards and be shortlisted for an International Emmy.

This article on shooting pieces to camera for news and documentary is an excerpt from his new ebook Camera Confidential: How to Succeed as a Video Journalist which can be ordered here. It’s a cracking guide that aims to cover the basics (and not-so-basics) of the skills you’ll need to survive and thrive as a videojournalist in today’s hectic news environment.

We don’t all have an experienced colleague who’s willing to share their experiences and look out for us on the job – think of this book as the next best thing.

The Piece to Camera

The good old-fashioned stand-up, the piece to camera, is probably the most overused element of news packages. This is where the reporter (or you, if you are a self-shooting journalist) gets to show their face in the video and prove to the viewer that they are actually at the scene, earning the big bucks. Personally I hate them and feel that their use is rarely justified. That’s a sentiment that can make me very unpopular with colleagues – some just want to tell a good story in the best way possible while others thrive on seeing themselves on screen.

In fairness, the PTC has become such an integral part of how people think a news piece should be structured that if you send a film to a traditional broadcaster without one, inevitably the bosses will ask why and often force you to put one in. Don’t get me wrong, when done well and with good reason a stand-up can be brilliant – the problem is that many fall into the category of, ‘I’m standing in front of this sign with nothing new or important to add.’

How can you make them work?

The aim of a good piece to camera is often to link two thoughts and to bridge between two sequences. BBC shooter Nick Woolley looks at it this way:

‘When producing a story, the reporter – or more relevantly the broadcasting company – wants to own the story to some degree. We want the story to be “our story” rather than just a story that we tripped over and fell head-first into. Often a news story involves a few twists and turns, a variety of interlocking threads. Our job collectively is to ensure a strong, cohesive link between these threads. Often a piece to camera is the best and easiest way of turning a sharp corner in the middle of a piece. I say in the middle because historically pieces to camera always reared up at the end of the piece, complete with the reporter sign off. I think that the fact that they are now more often found in the body of the report indicates a different, new and somewhat welcome approach to the stand-up as a device. Together with making a left turn in the film more bearable it makes the viewer, albeit subconsciously, look on the reporter as someone who is actively involved in the story and someone who has bothered to get off his backside and find out what is going on.’

I agree with Nick, in my opinion the best pieces to camera are those that fit naturally into the film without disrupting the visual flow. In other words they should be built into the sequence, part of the action. Try to seize the moment. While you’re out filming, keep the reporter mic’d-up and ready just in case something happens. For example if you are in a war zone you never know when the action might start. When it does you won’t have time to be fishing in your run bag for a mic. Be prepared at all times.

The reality is that rarely do we get to shoot stand-ups in the right place, at the right time. Instead we are forced to make something from nothing after the action has finished. Often we are in the wrong place all together – I’ve had to shoot pieces to camera in a completely different country from where the story is happening because we physically couldn’t get there in time (Be sure to make it clear where you are though or viewers may feel tricked). The challenge is to bring these actionless stand-ups to life. There are many ways to do this: I love to use movement (when the story warrants it), putting a wireless lapel mic on the reporter and walking with them down the road. If that’s not possible then maybe I’ll look for an interesting foreground – something relevant between the lens and the subject that adds an extra visual dimension. If all else fails then you can’t go wrong with a colourful, out-of-focus background behind the reporter – shoot them on the long lens with the iris nearly wide open. Shooter and editor, Guy Siggers:

‘I will always try and steer people away from static stand ups. Even if it’s just a simple pan, I feel the piece to camera needs action and should provide detail or energy. But in the new digital age we’re now exploring ways to engage with a different audience. Shorter PTCs, multiple PTCs can bring interest into a piece, engaging the viewer and holding their attention. In a sterile location, bringing the correspondent into frame from a pulled-focus foreground with a slow minimal move can be nice, whereas in action situations handheld is king and can help the energy along. Being creative and not following convention has never been more important.’

‘We can use reflections, wide shot cutting to tight shot with something like a natural wipe of a car passing through frame, or we can use movement to make the viewer notice that something is happening on the screen that warrants their attention.’

Be willing to experiment, don’t fall into the trap of always doing static mid shots. Find new angles, new approaches. Sure, once in a while you may get criticised and told that you did something ‘whacky’, but if you are worried then shoot two versions: a ‘straight’ one and an edgy, creative one. That way nobody can complain.

When directing a less-experienced reporter, try to help them relax. Memorising a script word-for-word can be a bad approach – it doesn’t sound natural. A PTC should be conversational and engaging. If they are walking, make sure they start to walk before they start talking, otherwise it can look very awkward. Also, as shooter Colm Hand says:

‘Always fuss over people. Even if someone’s tie is straight let them know you’ve checked it, or if someone’s necklace is crooked let them know so they can fix it. People will always appreciate it if you go the extra mile to make them look good.’

Which mic should you use?

As with all filming, you must choose the correct microphone for the job. Generally, for a piece to camera, I use a radio lapel-mic – it looks tidier and leaves the reporter’s hands free. If it’s windy then sometimes I will use a directional stick-mic (like a Sennheiser MKH 60 or 416) with a fluffy windcover, but no matter what happens I’ll be sure to frame the ‘dead dog’ out of the picture, as I think filming a fluffy windcover in a shot should be a sackable offence unless there is absolutely no other alternative!

Shooting your own piece to camera

And what about VJs shooting their own PTCs? I’ve had to shoot a number of my own and I know how hard it is. There are different ways you can approach them. I’m a fan of the ‘selfie’-style – i.e. holding a small camera at arms length and looking back on myself – you need a lightweight camera and long arms for this.

I shoot these types of stand-ups with consumer compacts that have wide-angle lenses – you can also use a small sports camera like a GoPro. If it’s not windy or you are indoors then you can sometimes get away with just using the camera’s internal mic to record sound. But my advice would be to put a mic on, record the audio into a sound recorder, and then sync it up during the edit.

If you are looking to make a more traditional PTC then be sure to set your focus to manual, mark the spot where you want to stand, ask somebody to stand on that spot for a moment so that you can set focus, and then go for it. If nobody is available to stand in, then put your kit bag or a lighting stand on the spot and focus on that. These PTCs are better if you have a flip-out screen so that you can still check your framing while filming – if you don’t, just be sure to check it back afterwards and make sure it looks and sounds good.

Christian is a filmmaker and journalist with over 20 years experience shooting short documentaries for the web and broadcast. Learn more about him and the ImageJunkies podcast at imagejunkies.net.